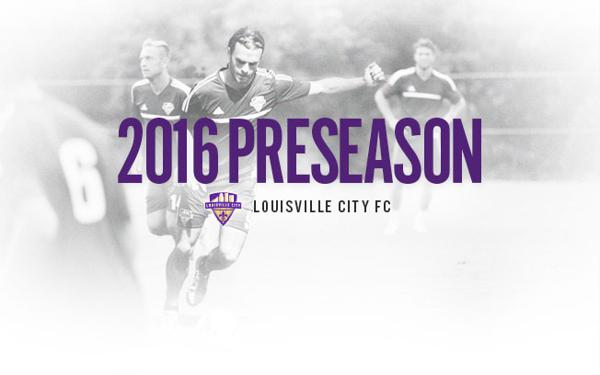 LOUISVILLE, Ky. — With a second place overall finish in the league, the most goals scored and an Eastern Conference Final appearance, Louisville City FC left little to be desired in on-field improvements going into year two. Yet, in efforts to make the club an even stronger threat for a league title, coach James O’Connor is taking his team to Bradenton, Fla., to participate in a two-week pro training program at the world-class IMG Academy beginning Feb. 14.

“I’d like to thank the ownership group for giving us the opportunity to spend a couple of weeks at IMG Academy,” O’Connor said. “This time will allow the new players to settle in with our group and, at this stage, we just can’t wait to get going again.”

IMG Academy offers innovative, comprehensive and customized training programs for athletes on its 500-acre campus with unparalleled facilities. The players are given a detailed schedule for meals, mobility, skills and strength training, and simulated matches on IMG’s 16-professional quality Bermuda-grass fields.

Louisville City FC will have access to IMG’s elite team of specialists in training, rehabilitation, vision training, weight training, and mental conditioning. The club will also have the opportunity to compete with other professional teams/players in the form of coordinated friendlies.

The Club will return to Louisville on Feb. 28 to continue it’s preseason. The preseason schedule will be released in the coming weeks with the United Soccer League schedule to follow. Fans can stay up to date with all of Louisville City’s breaking news, roster updates and ticketing information by following the Club on Facebook, Twitter and Instagram. Season tickets are available for Louisville City’s historic second season via the Club’s official website. 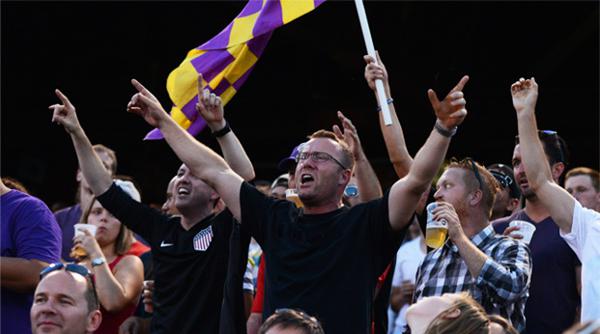 Photo courtesy of CMH Photography
There has been no shortage of news the past two weeks concerning Louisville City FC. So here’s your chance to catch up. 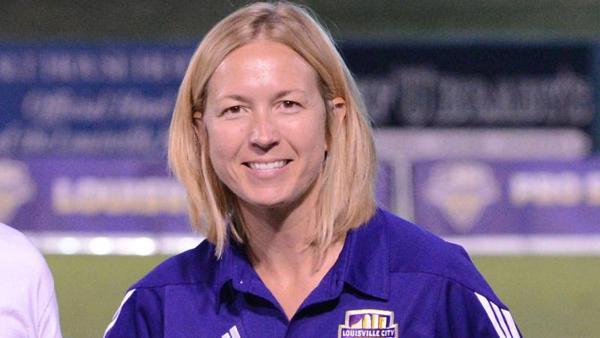 LOUISVILLE, Ky. — Louisville City FC is continuing to build off the momentum from an overwhelmingly successful inaugural season. Wednesday, the City of Louisville announced it hired a consulting team to look into where a soccer specific stadium should be constructed. Today, Louisville City president Amanda Duffy spoke to Jason Davis of World Soccer Talk on the web live show, Soccer Morning, to discuss the new developments on and the long-term goals for Lou City.

“The city has been working the past several months to evaluate and bring in a company to do exactly what’s been announced,” Duffy told Soccer Morning. “They are evaluating some site options and look at some feasibility studies on the financing part of this also to bring a soccer specific stadium to Louisville. For them to bring in a quality company such as CSNL into Louisville to jump start this project and evaluation of these sites is big for Louisville City.”

Davis acknowledged Louisville City’s 2015 accomplishments of having the second highest number of season tickets sold, and second highest average attendance. It’s something Duffy says the team is using to build on to be part of Major League Soccer’s expansion.

“We know where we were in year one, we have to build off of that,” Duffy said. “We know we have boxes that we have to check to be a part of the conversation for Major League Soccer. Part of that is attendance, our corporate partnerships, and the general engagement with the fans.”

The Soccer Morning host went on to mention Louisville’s on-field success with a second place overall finish, and an Eastern Conference final appearance, but also asked Duffy how the City of Louisville will respond to a second-year, after the newness factor has worn off.

“It was exciting when MLS announced they will be expanding to 28 teams in the next few years, and we’re in position after our first year with the success we’ve had from an attendance standpoint on the field. We feel like we have some pieces in place.”

Duffy mentioned throughout the course of the interview that it’s important for the club to continue to operate on an MLS level. The full interview is available on YouTube at this link HERE. 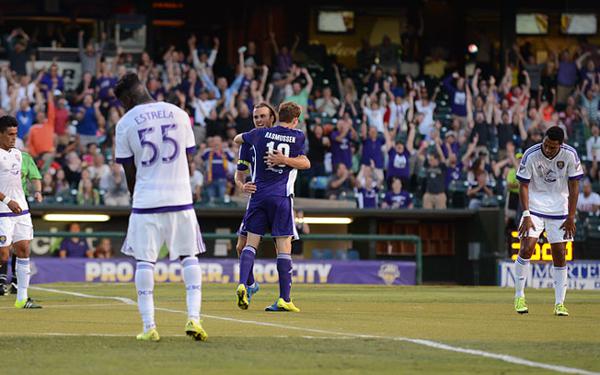 LOUISVILLE, Ky. – The City of Louisville and Mayor Greg Fischer took a major step toward achieving Louisville City FC’s highest ambitions in American soccer on Wednesday, announcing a study on the feasibility of constructing a new soccer-specific stadium. The $75,000 study is being conducted by Conventions, Sports & Leisure International – a leading advisory and planning firm based in Minneapolis, Minn. – will provide insight into the physical, operational and financial characteristics for building a new stadium in Louisville.

With Major League Soccer expected to expand to as many as 28 teams, a move toward a soccer-specific stadium in Louisville sends a clear message.

“The step that the Mayor’s office and the City of Louisville have taken is significant in the process to bring a soccer-specific stadium to Louisville,” said Louisville City FC president Amanda Duffy. “By engaging Conventions, Sports & Leisure International to deliver a recommended direction for a stadium location as well as a path for project funding illustrates the decisive action that we’re all taking to achieve the ambition of bringing the highest level of professional sports to Kentucky and Southern Indiana.”

The study will examine four potential areas – including downtown Louisville – to see which area provides the greatest opportunity for a soccer-specific stadium that could also host a variety of events such as international soccer matches, concerts, festivals and other community gatherings.

“Professional soccer is off to a great start in Louisville, and a new soccer stadium could have many positive impacts on our economy,” said Fischer. “This new investment in soccer will contribute to our authentic and vibrant community and give citizens one central team to rally around.”

If approved by the Louisville Convention and Visitors Bureau board at its next commission meeting, an additional study that looks at the feasibility of building an amateur and youth sports complex will be commissioned by the CVB. The complex could house sports such as soccer, lacrosse, field hockey, baseball and softball.

“The remarkable success of the Louisville City FC shows that our community supports and craves professional soccer” said president and CEO of Greater Louisville, Inc., Kent Oyler. “From the business perspective, having multiple high-energy spectator sports like LouCity FC helps with talent attraction and retention.”

The timeline of the study and project details are yet to be determined. Louisville Forward, the city’s office of economic development, is actively collaborating with CSL on study parameters. 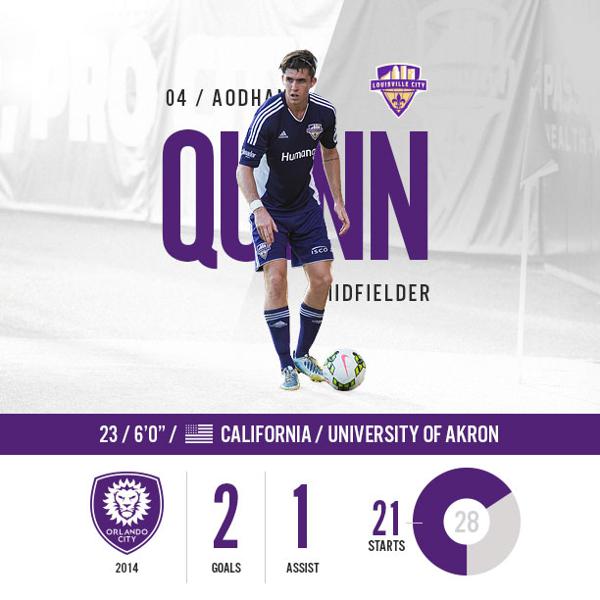 LOUISVILLE, Ky — USL Goal of the Season winner Aodhan Quinn will return to Louisville City in 2016, the Club announced Tuesday. Last season, the San Diego, Calif., native dazzled with a pair of unforgettable goals — one that was immortalized by a national fan-vote as Goal of the Season.  Quinn was a key component in the offense that tallied the most goals in the league last season.

He’s the 16th player on the Louisville City roster for 2016. Per Club policy, the conditions of his contract were not disclosed.

“We are extremely thrilled to bring Aodhan back,” head coach James O’Connor said. “He did very well for us last year and I believe we have three excellent midfielders in Aodhan, Guy and Juan.”

Quinn’s debut for Louisville City FC on May 12 versus the Wilmington Hammerheads couldn’t have been any better. In the 40th minute the 23-year-old midfielder rocketed a left-footed strike off a half-volley from 20-yards out that was destined for the top corner. Two minutes later, the debutant added an assist by laying a pass off to Conor Shanosky — who blasted the ball into an open net.

His goal at home versus Wilmington could have been a Goal of the Season nominee had it not been for his free-kick on the road at Tulsa on Aug. 15, that came in at No. 5 on SportsCenter’s Top Ten Plays that night. Quinn’s free kick, curled into the upper right corner and with it solidified it’s place into one of Louisville professional sports’ top moments.

Quinn’s goal versus Tulsa wins USL Goal of the Year

After winning the Goal of the Season, Aodhan Quinn was the top Twitter trend in Louisville on Dec. 29. Quinn said that was something he never thought he would see, especially in the offseason.

“I didn’t think I’d win it because there were so many great goals and so many good candidates – I mean it was against a whole season’s worth of goals,” Quinn said. “With just about an hour left in voting, my sister called and told me I was in first place. That was special and is just a testament to the fans of Louisville City, soccer fans across the country and especially to my family for voting.”

Quinn re-joins an already star-studded lineup, and the club still plans to announce additions to it’s 2016 roster in the coming weeks.

LouCity has solidified itself as the nation’s premier second-division soccer club since launching less than a decade ago. Back-to-back USL Championship title winners in 2017 and 2018, the boys in purple have reached at least the league’s conference final in all eight of their seasons.

ABOUT US
STADIUM
FACILITY
FOUNDATION