The boys in purple advanced to a conference semifinal home matchup. 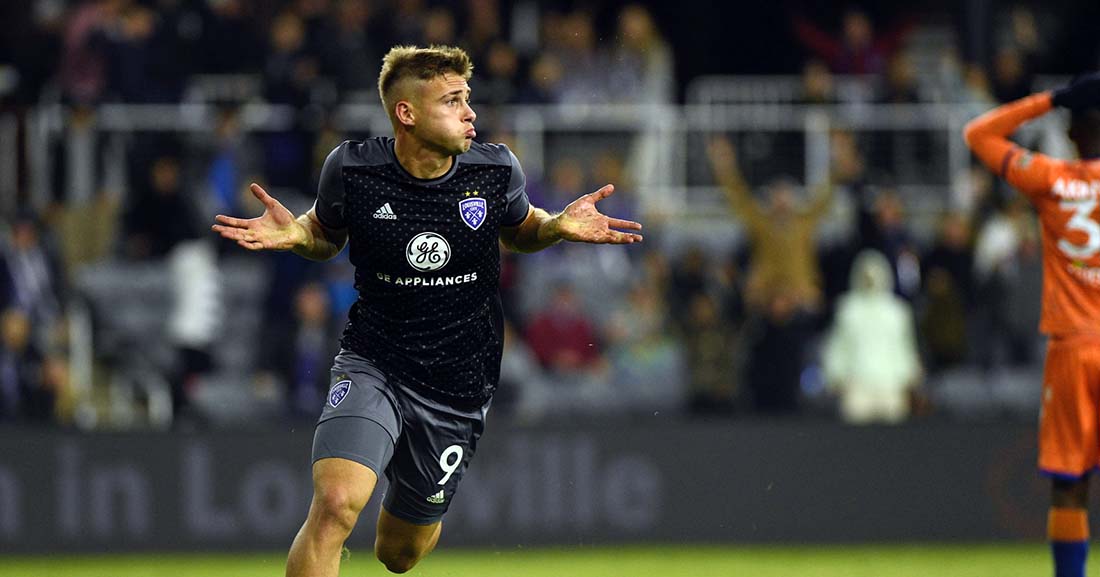 On a Louisville City FC squad stocked with postseason experience, a newcomer to the club advanced the boys in purple out of their USL Championship Playoffs opener.

Jorge Gonzalez, on loan from Major League Soccer's Portland Timbers, corralled a 74th-minute loose ball in the box Saturday and tucked it in at the far post to secure a 1-0 victory over Miami FC.

The win at Lynn Family Stadium was accomplished in front of a club-record crowd of 9,097 for a postseason opener. It also moved LouCity forward to the Eastern Conference Semifinal round with a 7:30 p.m. home matchup next Saturday awaiting against the Charlotte Independence.

“It was amazing,” head coach Danny Cruz said of support in the stands. “Every single one of our players feels an immense sense of pride playing in front of these fans every single week. You could hear it tonight. You could feel it tonight. We’d press. We’d win the ball back and you could hear the crowd. It gives us another sense of energy.

“I’m looking forward to feeling it again next week. It’s a big reason we’ve had success at this place.”

Gonzalez made this his fourth goal in purple across all competitions in 18 appearances having missed much of the season’s first half due to injury. A game-winning strike seemed long in the making during a game LouCity out-numbered Miami FC 7-2 in shots on target.

With the game scoreless at halftime, Cruz said he told his side to understand “we’re going go get a goal. Believe that. Understand that. Here’s how we can break them down a little more.”

“We had good chances in the first half, so we weren’t worried about scoring the goal,” Gonzalez said. “We knew it was going to come…We always talk about it. We say when someone comes here, we’re going to play under our terms. That’s what’s so special about this stadium. It’s really hard to beat us.”

Five minutes before Gonzalez converted, the host side’s next-best look came on a grounded Jonathan Gomez cross and Paolo DelPiccolo flick. Soon after, Gonzalez found himself set up to beat opposing goalkeeper Jeff Caldwell thanks to some 1-2 play with Corben Bone.

Yes, that’s the same Caldwell who starred all season at Hartford Athletic, a division rival of Miami. The club on Friday announced an emergency loan to bring Caldwell in with Miami FC reduced to a single healthy goalkeeper — then threw him straight into a starting role.

Coincidentally, Gonzalez last scored on Sept. 7 in a victory over Hartford. Caldwell was in goal that night as well.

Gonzalez’s finish was all LouCity needed on another solid night for its defense. A week ago, the boys in purple kept Birmingham without a shot on target in a shutout victory that resulted in a USL Championship Central Division title and No. 1 playoff seed.

A similar performance propelled City to the league’s round of eight and a meeting with Charlotte, the Atlantic Division’s No. 2 seed. The independence are on a run of nine games unbeaten having defeated Memphis 901 FC by a 3-1 score Saturday.

LouCity season ticket members who opted into attending the playoffs will see those tickets hit their SeatGeek accounts Sunday. Ticket go on sale to the public at noon Sunday by visiting LouCity.com/playoffs.

Man of the Match: Jorge Gonzalez