Loss at Memphis 901 FC drops LouCity to second in division

The boys in purple have three games to go to earn a No. 1 playoff seed. 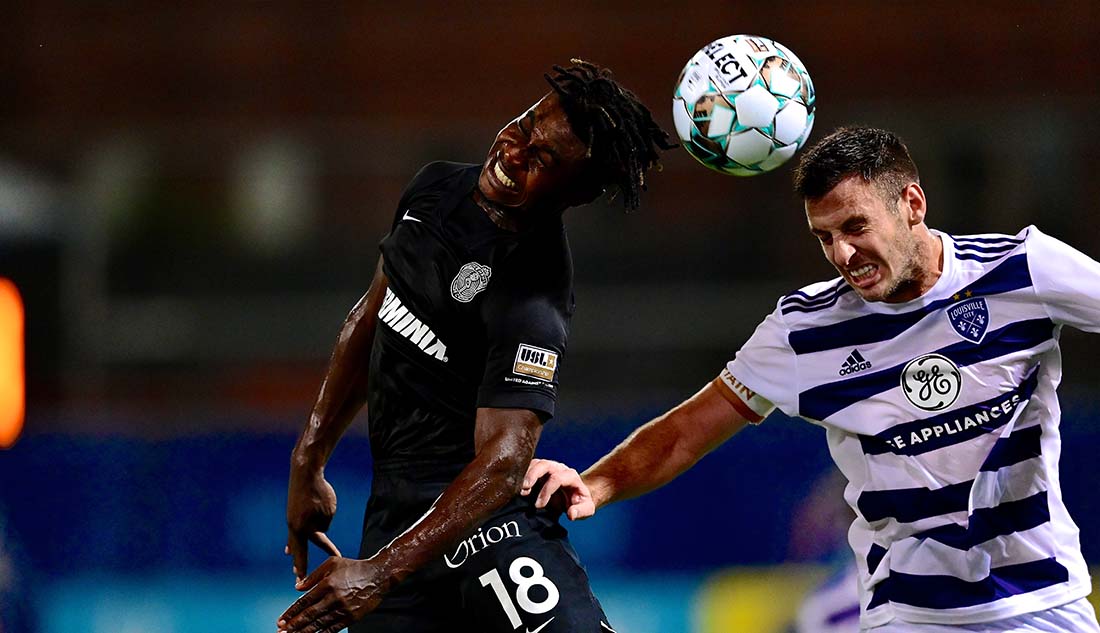 Louisville City FC has work to do when it comes to winning the USL Championship’s Central Division.

Memphis 901 FC scored a pair of unanswered goals Wednesday night to upset the boys in purple 2-1 at AutoZone Park while elsewhere around the league, a 3-1 victory by Birmingham Legion FC over the Austin Bold led to a change atop the table.

Birmingham’s 56 points are now one more than LouCity’s 55 as the pair contend for the division's top playoff seed with three regular season games to go.

"The reality is that the loss tonight doesn’t change what we’ve done this season — doesn’t change the runs we’ve been on or the wins we’ve had," said LouCity head coach Danny Cruz. "But we do need to continue to improve. I’ve said it over and over again to the group, but we cannot take any moment for granted. I felt tonight at times we looked a bit lethargic — a bit heavy-legged — and conceded two goals we shouldn’t concede.”

Paolo DelPiccolo opened scoring for City for the third straight game, flicking in a shrewd grounded corner by Oscar Jimenez in just the 12th minute. That made a career-high nine on the season for DelPiccolo, a central midfielder most of his career taking on a more advanced attacking role as of late.

But whereas the boys in purple went on to win their two prior fixtures sparked by DelPiccolo, the script deviated Wednesday.

901 FC equalized just before the half on a Michael Salazar header. The hosts later took the lead in the 78th minute on a fine team goal. Working outside to in, Memphis saw Mark Segbers slot a shot past LouCity Chris Hubbard that wound up the game winner.

“We spoke the last few days about being tuned in from the 35th minute to the 45th minute, so that’s unacceptable," Cruz said. "I felt a few guys fell asleep in the moment, and that’s certainly an issue we need to solve. Ultimately, it’s not good enough. I take full responsibility for us.”

LouCity fell after Cruz — announced earlier this week as the club’s permanent head coach — elected to make five lineup changes given a pair of short turnarounds. This final midweek game of the season followed four days after a dramatic Saturday victory over Sporting KC II and precedes a trip to play rival Indy Eleven this weekend.

Among the new starters, forward Abdou Thiam played 70 minutes, his longest shift since 2019 after missing most of this season due to injury. Thiam had a golden chance in the 66th minute, but he couldn’t manage to get on the end of a Cameron Lancaster cross when left unmarked in the Memphis box.

Qualify opportunities were rare elsewhere for LouCity, which landed only a pair of shots on target despite firing 10 times from inside Memphis’ penalty area.

“Tonight, their chances and their goals came from us not making plays in critical moments," said defender Sean Totsch, "whether it’s staying with our runner or marking in the box. We’ve done a lot better recently, but tonight we didn’t do good enough there."

All, of course, is not lost for LouCity, which sits at 16-5-8 on the year, had gone seven games unbeaten into Wednesday and has already clinched a home opener for the playoff the first weekend of November.

The club will look to right itself with a 7 p.m. Saturday kickoff in Indianapolis. The Indy Eleven game will air on WBKI/The CW, ESPN 680/105.7 and via ESPN+ streaming.

“We all know this wasn’t good enough collectively," Totsch said. "The group didn’t have our best performance tonight. The thing is, with short turnarounds we have the chance to right a wrong."