The boys in purple will be back home Sunday for the first time in a month. 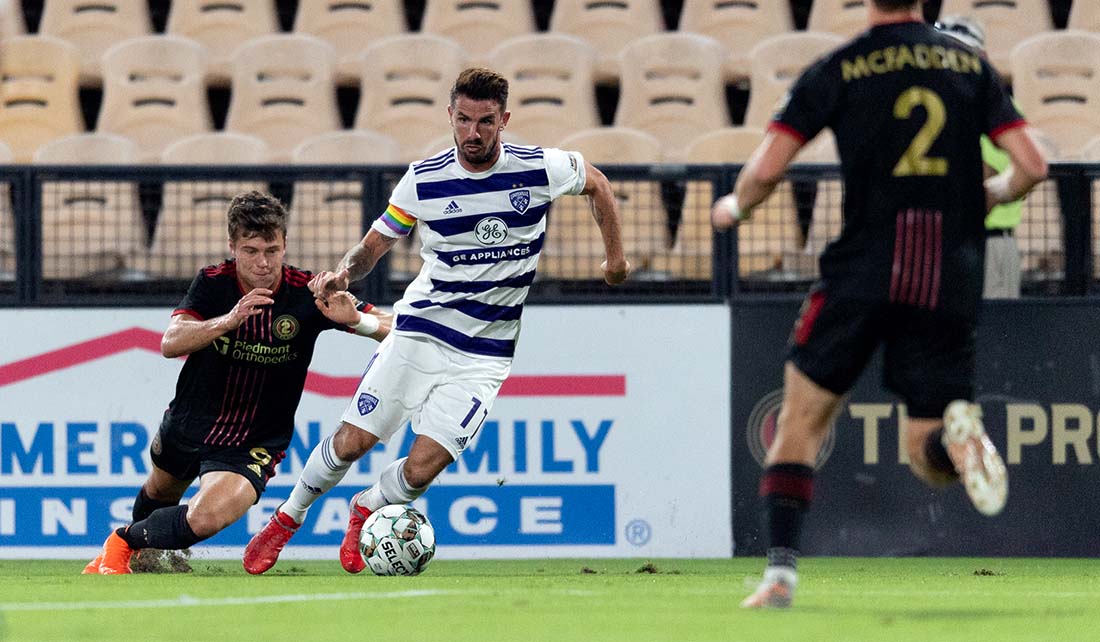 The boys in purple equalized in the second half Wednesday to finish a level 1-1 against Atlanta United 2, marking five straight games undefeated, all of them away from Lynn Family Stadium to cap September.

But, said coach Danny Cruz, "I feel like a broken record. I felt like we created enough chances. We weren't good enough in the final third — that's for sure — but we also conceded a lot of chances in transition. I spoke to the players about obviously wanting to manage the game better.

"...I'm frustrated with the result, but it's the end of a difficult five-game road trip. I spoke to the players about the importance obviously of returning home and getting three points in front of our fans."

LouCity’s back in friendly confines Sunday afternoon for a headliner on the 2021 schedule. The USL Championship’s top-two clubs in attendance meet when the Western Conference’s New Mexico United visits for an ESPN2-televised game.

Stakes will remain high as the boys in purple continue to firm up their postseason status. A draw at Atlanta’s Fifth Third Bank Stadium moved them to 14-5-7 on the season, with 49 points two clear of second-place Birmingham Legion FC on the Central Division table.

LouCity remains a win away from clinching a spot in the USL Championship’s playoffs.

"It's not easy doing five away games in a row," said midfielder Niall McCabe, "and under the circumstances we played to remain unbeaten shows great resolve — great mentality. On the other hand, we should be coming away with more points...with the team we have here and the expectations we have also."

The club had to work for its point Wednesday after a slow start. Atlanta United 2 nearly scored in the game’s opening minute with a ball played over the top, but David Mejia’s curling try soared wide. The hosts were able to convert, however, in the 40th minute when Aiden McFadden’s set piece landed to fellow defender Josh Bauer for his first pro goal.

At the half, a LouCity side that rarely allows chances was being out-shot 12-6. By the game’s end, the boys in purple had out-shot Atlanta 18-17 while looking for a game winner.

McCabe’s 51st-minute corner kick changed the game as it landed to Cameron Lancaster for the striker’s fourth goal in five games and 15th of the season, good for third in the league. As with his two most-recent goals, this one was also a header.

"We do a good job of designing set plays where we can expose opponents," McCabe said. "We felt like we had good areas to attack tonight, and my job was to put it in those areas...Cam's a goal scorer, so he's always a threat around the box."

While a number of other solid looks followed the goal, LouCity failed to capitalize. An extra pass in the box in the 55th minute led to a blocked Lancaster shot, and substitute forward Kyle Greig saw a second-chance look in the box turned away in the 79th minute.

One final look — and a good one — came more than two minutes into stoppage time. Antoine Hoppenot found himself on a counter, and his try from distance at the death skimmed just over the bar.

"What was going through my head there toward the end is I see (Hoppenot) do it every single day in training when we puts that in the back of the net," Cruz said. "Obviously I know he'll want that one back, but again, we missed too many chances tonight that I expect us to score. The players know that.

"I'm always honest with them in the locker room. I don't hold anything back. I was proud of the mentality there in the second half. I was proud of the fight we put in. I just thought we needed to manage the game better, and we're certainly looking forward to getting back to Lynn."

LouCity settled for a draw but capped its road trip without a loss. This result followed a win at Hartford Athletic (Sept. 7), draw at OKC Energy FC (Sept. 12), win at Indy Eleven (Sept. 18) and draw at Memphis 901 FC (last Saturday).

Six games remain in the regular season, with the New Mexico tilt to kick off at 3 p.m. Sunday.