Bell: What we learned from LouCity's win over Indy Eleven

The boys in purple have a total team defensive effort to thank for their clean sheet. 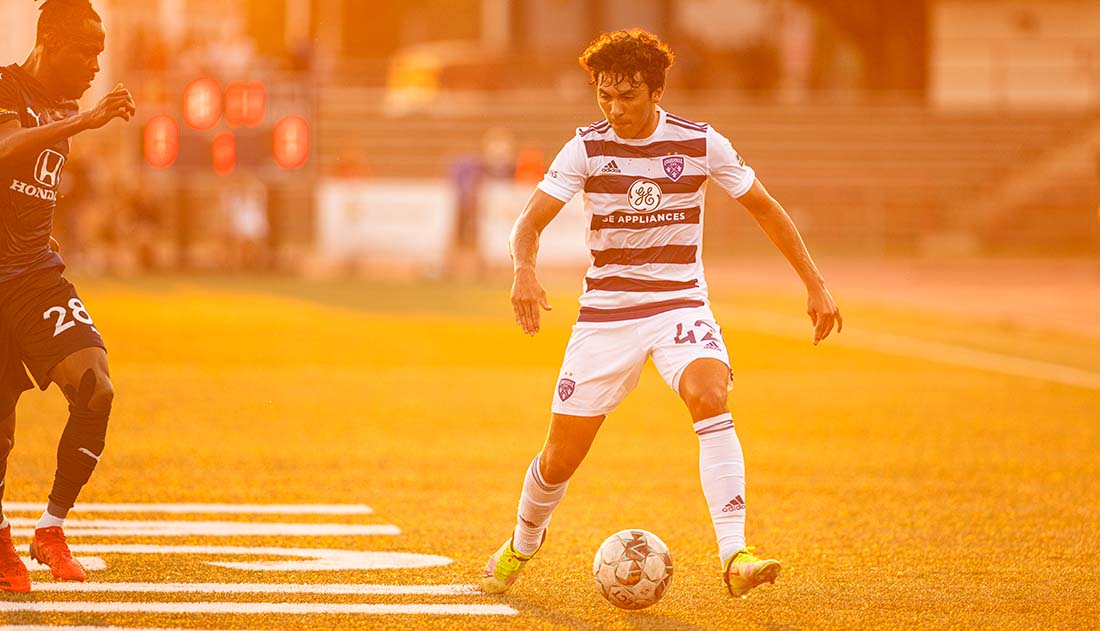 Louisville City FC shut out Indy Eleven by a 2-0 score on the road Saturday night in a feisty rivalry battle fueled by 34 fouls — 17 apiece for both sides.

Antoine Hoppenot registered the first goal of the game and his third of the season in the 41st minute after he jabbed Jorge Gonzalez’s through ball past the oncoming Indy goalkeeper. Cameron Lancaster doubled LouCity’s lead when high pressing helped the ball onto Hoppenot, who looped it toward Lancaster for an acrobatic flicked header over the keeper in the 69th minute.

“I was extremely proud of the group. I told them that after the game,” LouCity coach Danny Cruz said. “We limited their chances. We dealt with their long balls. We dealt with the second balls. These games always have a bit of bite to them — a bit of fire to them. I thought the entire front group was excellent tonight.

“I thought the movement off the ball was good. We didn’t start the game how we wanted, and I’m OK saying that because the response was excellent. The guys that came off the bench were excellent. They gave us everything we needed to close out the game. I felt that tonight, it was an excellent team performance from everyone.”

This is the first time this season LouCity have taken home all three points against Eleven FC, with their previous two meetings ending with a loss and a draw.

The boys in purple were dominant on both sides of the pitch. Offensively, they tried twice as many shots (10) and corners (4) than Indy. Defensively, a strong shift ensured a sixth clean sheet on the season.

Here’s more of what we learned Saturday…

Playmaking was key to unlocking the Indy defense as the Eleven’s compact midfield made penetrating the backline difficult. But a few players stood out in securing the three points.

Hoppenot was on fire against Indy with a goal and an assist. The Frenchman attempted three shots on the night, second only to Lancaster’s four. Speaking of him, Lancaster also had the most shots on target out of any player on the field with two.

Against his former team, Tyler Gibson made 22 passes in the opposition’s half, the most of any LouCity player. Consistent as ever, Brian Ownby put in five crosses from the winger position in Danny Cruz’s 4-3-3 formation.

Jonathan Gomez, while putting in three crosses on offense, worked tirelessly back on defense with a total of 10 duels. The 18-year-old also won four fouls while conceding none.

A trend of conceding late may be in the past, as it has no been six straight games LouCity hasn’t allowed an opposing goal after the 80th minute.

Combined Saturday, LouCity center backs Sean Totsch and Alexis Souahy had seven clearances, the same number the entire Indy Eleven team had all night. The pair also registered three interceptions, adding to their combined tally of 50 on the season.

It wasn’t just the center backs who shut Indy down as Ownby had the most tackles of any player on the night with three. LouCity’s trio of midfielders contributed two interceptions apiece as well as gained possession from Indy 18 times.

Heat maps indicate that Indy Eleven was rarely allowed into LouCity’s box. Only one opposing shot was taken from the area.

“To be fair to the group, we’ve deserved more [clean sheets],” Cruz said about his defense. “We’re limiting opponents to an average of six shots a game. It’s easy to talk about the shutouts but I think that [the clean sheet] was thoroughly deserved tonight.”

LouCity’s 4-3-3 formation seemed to lock Indy down. The club’s wingers tend to drift up, and Gibson has played a key role as of late to anchor the defensive midfield.

As we’ve seen all season, Gomez furthermore displayed his amazing defensive 1-on-1 capabilities as he only allowed red-hot Indy winger Gordan Wild one shot on target.

LouCity veteran Oscar Jimenez has also been solid since returning from injury. He didn’t allow Indy’s left forward a single shot or key pass and conceded only one open play cross.