The boys in purple scored three second half goals to seal their latest preseason result.. 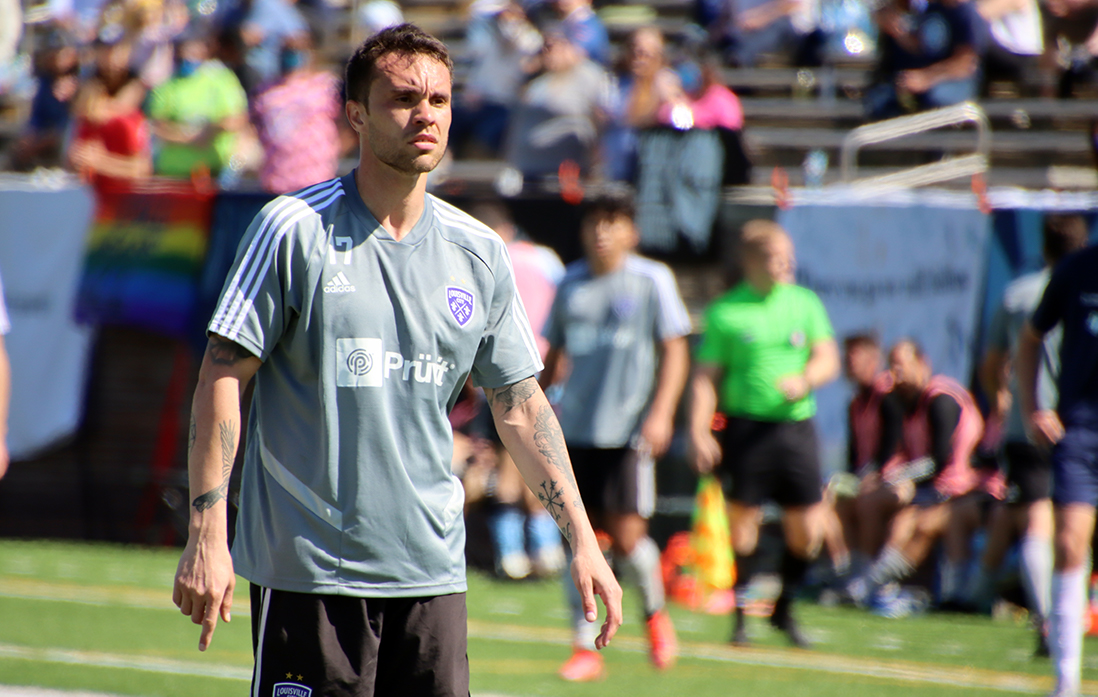 Paolo DelPiccolo, Jimmy McLaughlin and Cameron Lancaster all scored during the second half Saturday as Louisville City FC’s attack found its stride in a 3-2 preseason victory over Chattanooga FC.

The boys in purple rallied from a 1-0 halftime deficit at Chattanooga’s Finley Stadium, with an 83rd-minute rocket of a shot by Lancaster the game winner in an exhibition played in front of a smattering of fans.

LouCity's head coach, John Hackworth, lauded the way his club rallied "in the fashion that we did."

"Basically changed a little bit of tactics, took what our opponent was giving us and that was really important," Hackworth added. "The guys that came on in the second half made a huge impact and scored two goals out of the three."

Whereas LouCity hails from the USL Championship, Chattanooga FC has risen from an amateur side to fully professional club competing in the National Independent Soccer Association.

A banner affixed to the stadium’s wall honored the most prominent link between the two organizations. Before becoming LouCity’s longest-tenured player, midfielder Niall McCabe developed during his college days at Chattanooga. The sign read: “Always a Blue…even in Lou!”

Pleasantries ended not long after the opening whistle when a Sean Hoffstatter goal pushed Chattanooga ahead in the 10th minute. LouCity had its share of near misses until DelPiccolo brought the score level in the 67th, cleaning up a Jonathan Gomez corner as the ball caromed about the box.

Five minutes later, McLaughlin — the former FC Cincinnati forward who signed with LouCity this past offseason — then netted his first goal in purple, capitalizing on a one-on-one chance with the opposing goalkeeper.

"It means the world to me," McLaughlin said of scoring. "We've put in a lot of hard work here over the last seven, eight, nine weeks of preseason. The coaching staff has been challenging and pushing me out of my comfort zone to get the best out of myself. The guys have been really helpful in integrating me into the system and into the team, and it feels good for it to all come together today with my first goal in purple."

Chattanooga, however, was quick to tie the score again when Juan Hernandez's 75th-minute strike evened things, at least until Lancaster provided the final answer on rocketed shot into the top-left corner.

Lancaster’s goal was a long time in the making. His try off a free kick's rebound narrowly missed wide left in the 34th minute, he forced the keeper to make a stop on a header in the 34th, and in the 54th Lancaster broke down the defense but left his attempt just high.

The native Englishman, who surpassed 50 LouCity goals last season while on loan from Nashville SC, has returned for 2021 under a new multi-year contract with Louisville.

LouCity traveled to Chattanooga on the heels of facing four Major League Soccer opponents within the last month. City rematches Wednesday with FC Cincinnati in its next preseason tuneup, building toward its April 24 USL Championship opener against Atlanta United 2 at Lynn Family Stadium.