The LouCity captain out of the University of Louisville is going on six seasons in purple. 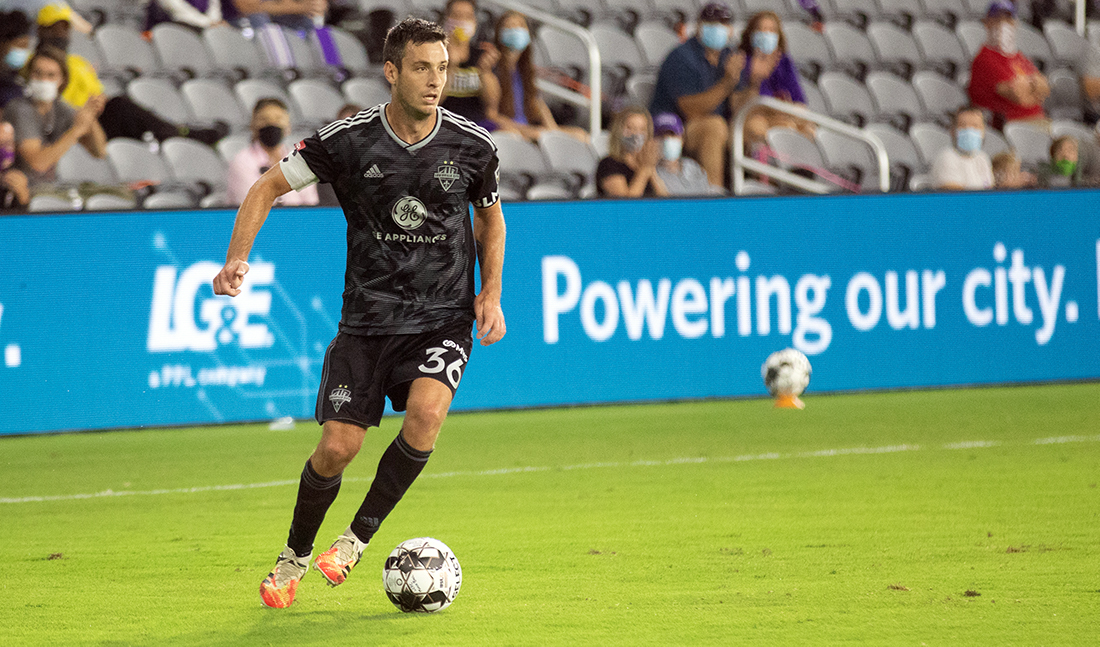 “I think I was just wired wrong in the head,” the Louisville City FC team captain says. “I can’t slow down.”

DelPiccolo, a 29-year-old midfielder coming up on his sixth season in purple, has in recent months continued to evolve in a way both further endearing him to the locker room and determining what life might be like beyond his playing days.

On the pitch, the University of Louisville product assumed a slightly different role, signaling a more attack-minded approach into 2021. Off it, he recently proposed to another well-known Cardinals alumnus, the volleyball standout-turned-ESPN sideline reporter Katie George.

Yes, we’ll get to the story first…

On a recent trip to Colorado, DelPiccolo encouraged George to dress up a bit for a family photo.

“She says, ‘All right, can I wear these heels?’” DelPiccolo tells it. “I said of course.

“I’d found this nice little overlook where a lake is in the mountains. It snowed and got really cold, so the trail — it’s just a 100-yard trail — had frozen. So she’s just sliding. She’s slipping and hanging on to me. She’s like, ’Why did you tell me I could wear these shoes?’

“She’s getting all frustrated and finally just falls on her back. But she got up laughing. We got a little bit farther, and I popped the question. We were laughing the whole time.”

The couple is planning their wedding for next season, or potentially later — at least “until we can have a proper party," DelPiccolo said.

George is currently based in Louisville, but her career is quickly taking off after earlier stints with WDRB News in Louisville and the Milwaukee Bucks. She features now on the ACC Network, with recent assignments including college football’s Orange Bowl.

One day, he “absolutely” expects to be following George around the country — and perhaps world — on assignment. For now, both are luckily based in Louisville, where DelPiccolo has become a fixture while leading LouCity to USL Championship titles in 2017 and 2018.

He carved his niche wearing the captain’s armband thanks to a fiery disposition. DelPiccolo also has a knack for pressing to win balls back in the central midfield.

However, other duties called when COVID-19 contact tracing counted DelPiccolo out of three games last July. The boys in purple finished that month 1-3, and coach John Hackworth was searching for solutions to turn an abbreviated season around quickly.

“We pushed him farther up the field, and that changed how we ultimately played a little bit and certainly started changing the outcomes,” Hackworth said. “We asked him to play a different role, but he loves that.

“In our end-of-season meeting, he referenced being better with his back to goal, or his finishing and final pass. ‘I’m finding myself in a different situation and need to train that more.’ You love to see when a guy like Paolo, with all the experience he has, is like a little kid fighting for the opportunity to lean a new skill.”

DelPiccolo finished 2020 with two goals and assist and 16 chances created — all numbers he’ll be looking to improve upon this year with the new role anticipated to continue.

“Knowing I’ll probably be doing that again this year, I was able to use the offseason to work on some things I was struggling with up there,” he said. “But also, I try to be the type of player that it doesn’t matter where you put me on the field. I’m going to work hard and press.”

“It’s just about using the skills I have in different spots and different ways.”

Especially with the latter, DelPiccolo has continued to fine tune his approach.

“Five, six years ago I had to learn that others aren’t going to respond the same way I respond,” he said. “I try to be conscious and open-minded when I think about how I’m talking to people, behaving and helping the team. Just because there’s a way I want it to go doesn’t mean it’s going to be most effective for us. I put a lot of value on that — work and analyze it a lot.”