The 7:30 p.m. Saturday showdown leaves plenty at stake for the boys in purple. 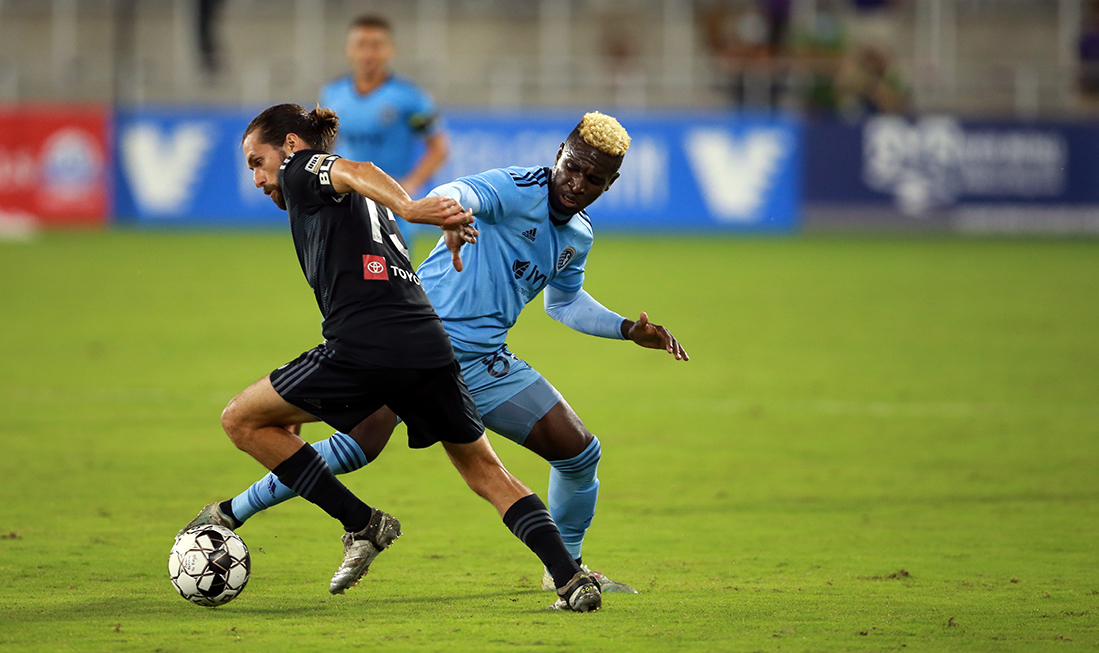 With its victory last weekend at Saint Louis FC, Louisville City FC clinched the No. 1 playoff seed out of the USL Championship’s Group E and along with it a home opener to the postseason. But the boys in purple can’t afford to let up now.

Saturday’s regular-season finale against Sporting KC II — kickoff’s at 7:30 p.m. inside Lynn Family Stadium — means one last opportunity for a key three points earned. Beyond the playoffs’ opening round of 16, host status will be determined by better record.

LouCity enters the weekend able to tally the Eastern Conference’s best overall points total but needs a bit of help. Only the Tampa Bay Rowdies, who play the Charleston Battery, can exceed LouCity’s record if both sides win their finales.

The boys in purple are on a 10-game unbeaten streak going back to the beginning of August. They’ve also won five in a row in their ascent to the top of a difficult USL pod also including the Indy Eleven, Saint Louis FC and Sporting.

SKC II, the youthful affiliate of Major League Soccer’s Sporting Kansas City, showed renewed life Wednesday by ending a five-game losing skid that bounced the club from playoff contention. The 17-year-old Bailey Sparks, subbed on in the 85th minute, scored a game winner in stoppage time of a memorable professional debut, helping knock off Indy by a 2-1 score.

Sporting hadn’t won since July 29, handing LouCity its most recent defeat. At that point, LouCity was 1-3 upon restarting its season — last of four in Group E — before rallying to win the division.

“From where we started to where we are now, if we do our job and win and Tampa wins, that means we’re second, and that’s still a phenomenal achievement. But the way the playoffs are situated this year, points matter in terms of who hosts the next home game, so we have a lot to play for Saturday, and we’re clearly facing a young Sporting team with quality experience as well that just went to Indy and beat Indy for the second time this year.

“We will have our work cut out for us. We cannot take them for granted in any way, shape or form because we finished first in our group. We have to make sure that we continue to play well and keep our momentum moving forward so we go into the playoffs with that momentum. I think that’s even more important than the points.”

LouCity: Devon “Speedy” Williams has defined himself professionally with swift feet and accurate passing out of the central midfield. He’s added himself as a goal scoring threat in 2020, too, by hitting the back of the net four times, including the game-winning header against Saint Louis FC off an Oscar Jimenez corner kick. In previous seasons, both with New York Red Bulls II and LouCity, Williams tallied one goal each regular season.

Sporting KC II: On the other side, Wilson Harris is squarely the player to watch with a scoring touch. The 20-year-old striker scored SKC II’s other goal in the midweek win at Indy, his team-leading eighth of the season. Harris is a Sporting KC academy product in his third professional season. Despite film of the forward, opponents haven’t been able to stop him. He poured in 12 goals in 2019 as well for a Kansas City side formerly known as Swope Park Rangers.

National spotlight: For the first time, it was announced last month, the USL Championship Final will get the ESPN treatment. The game will air at 8:30 p.m. on Nov. 1 after a trio of preceding playoff rounds. LouCity will host a conference quarterfinal on Oct. 10 before looking to advance to the conference semifinals (Oct. 16-18) and conference finals (Oct. 23-25). The boys in purple have appeared in three straight USL finals, winning titles in 2017 and 2018.

Group F update: As for that upcoming playoff opener at Lynn Family Stadium, the opponent remains to be determined. The boys in purple will match up with Group F’s No. 2 seed, which could be either the Hartford Athletic (10-3-2, 32 points) or Pittsburgh Riverhounds SC (10-4-1, 31 points). Having chased Pittsburgh all season, Hartford controls its destiny thanks to a 1-0 victory last Saturday over the Riverhounds.

On a streak: Each season in LouCity’s John Hackworth era, the coach has led his squad through a 10-game unbeaten streak. In 2018 and 2019, those runs preceded appearances in the USL final. The boys in purple will look for history to repeat itself in 2020. Last Saturday’s Saint Louis FC victory made it double digits unbeaten with five straight wins. The only longer undefeated run in club history was a streak of 17 games in 2016.

Hunting a Golden Glove: With seven clean sheets, LouCity goalkeeper Ben Lundt, on loan from MLS’ FC Cincinnati, is in contention for the USL’s top season award for his position. He’s even with Tampa Bay Rowdies keeper Evan Louro going into the final weekend of play. Lundt, who ranks 14th in the USL in saves with 30, was called into action more than usual against Saint Louis FC, making four saves to preserve a shutout.

On the board: Defender Oscar Jimenez, who at left back has led LouCity in assists since signing with the club in 2017, registered his first tally in that statistical category last out. Devon “Speedy” Williams headed in a 44th-minute corner kick that went down as the game winner over Saint Louis FC. Jimenez, often lauded for his service, accumulated five assists in 2017, 10 in 2018 and seven in 2019 to pace the boys in purple.

Stat stuffers: In addition to goalkeeper Ben Lundt’s pursuit of the USL shutouts crown, LouCity has others near the top of the league in certain categories. Devon “Speedy” Williams went into the week leading the USL in passes (904), Cameron Lancaster is tops in shots taken (48), midfielder Corben Bone ranks third in chances created (36), forward Antoine Hoppenot ranks fifth in assists (5) and Lancaster is fifth in goals (9).