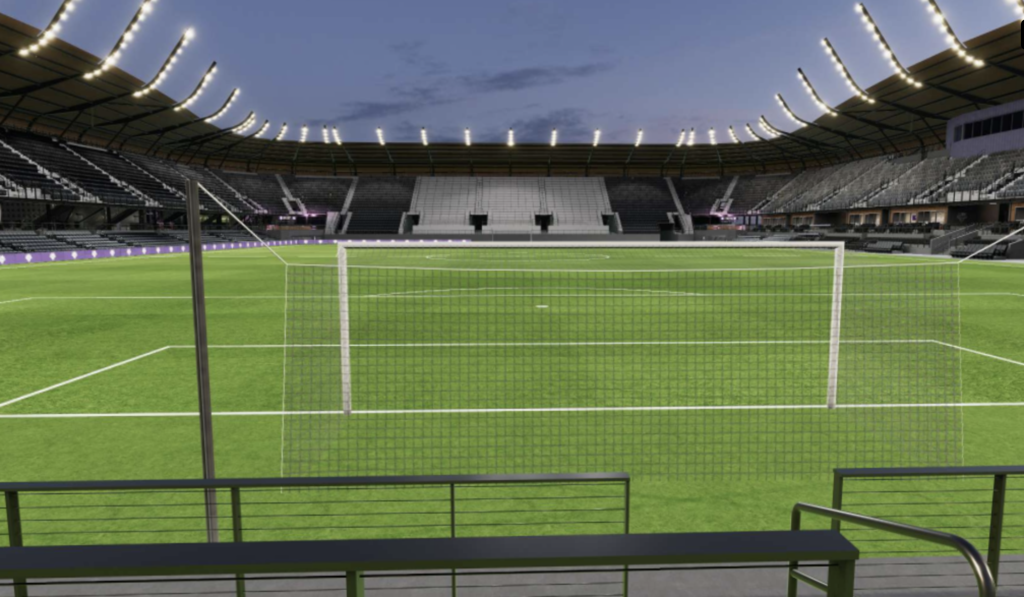 “It’s a difficult schedule due to our start on the road in addition to playing some of the top teams early in the schedule,” Louisville City coach John Hackworth said. “The schedule gets more balanced in the summer, but then we have a couple of mid-week games with three games in eight days later in the schedule. It’s a tough schedule, but we are looking forward to the challenge.”

The USL Championship schedule includes 17 home and away matches. Each Eastern Conference club will face two teams three times this season in hand-picked rivalry matchups. For Louisville City, the rivalry matchups are Indy Eleven (two home games and one on the road) and Saint Louis (one home match and two on the road).

The season kicks off on March 7 at North Carolina FC and then Louisville City will travel to Atlanta United 2 on Sunday, March 15 and to Pittsburgh to face the 2019 regular-season Eastern Conference-leading Riverhounds on March 21 in a rematch of the 2019 Eastern Conference Semifinal that Louisville City won in dramatic fashion on a header from captain Paolo DelPiccolo.

Louisville City will help Indy Eleven open Lucas Oil Stadium for the 2020 season in a rematch of the 2019 Eastern Conference Final which Louisville City won after a dramatic last-second equalizer from Antoine Hoppenot sent the match to extra time.

“It is going to be a challenge, there’s no doubt,” Hackworth said of his team’s road trips to start the season. “If you look at other clubs that have started on the road, you have to make sure you don’t fall too far behind at a minimum and, at the same time, you hope we can come home in a good position to build momentum.”

After four games on the road to start the season, Louisville City will return home for a major event. Lynn Family Stadium will host its first USL Championship match on Saturday, April 11 as LouCity hosts Birmingham Legion. The match will be televised on ESPN News.

“The opening of Lynn Family Stadium will be an incredible moment in our history as a club and community,” Hackworth said. “We expect the fans to be at full voice and the atmosphere to be amazing that night.”

Louisville City will host the Tampa Bay Rowdies on April 17 and then welcome the New York Red Bulls in the annual Kentucky Derby Festival match on Sunday, April 26 before returning to the road to take on Philadelphia Union II on April 29.

The club has three home games in May, hosting Loudoun United on May 9, Miami FC on May 23 and Charleston Battery on May 30 with a road trip to Hartford Athletic on May 16.

LouCity starts off June with a pair of road trips, traveling to Sporting KC 2 on June 7 and Saint Louis on June 13 before returning home to host rival Indy Eleven on June 20 and Philadelphia Union II on June 27.

The Pittsburgh Riverhounds come to town on Wednesday, July 1 before Louisville City heads on the road to face the NY Red Bulls II on July 10. A home match vs. Atlanta United 2 on July 18 is followed by a road trip to Charleston Battery on July 25.

Last season Louisville City went on a remarkable end-of-season run that started in August and carried through to another Eastern Conference Title. This August, LouCity will have its busiest month with six matches. The club will host Sporting KC II (Aug. 1), Saint Louis (Aug. 8) and Memphis 901 FC (Aug. 19) with road trips to Charlotte Independence (Aug. 15), Miami FC (Aug. 25) and Tampa Bay (Aug. 29).

The penultimate month of the regular-season slate consists of home games vs. Hartford Athletic (Sept. 4) and Indy Eleven (Sept. 12) and away trips to Saint Louis (Sept. 9), Loudoun United (Sept. 19) and Birmingham Legion (Sept. 26).

With 11 sections already sold out for 2020, the club expects to welcome a capacity crowd on the opening night and beyond. The only way to guarantee seats for the home opener is to purchase season tickets by calling (502) LOU-CITY or securing your seats via the club’s web site, LouCity.com. A limited number of single-game tickets will go on sale in February. 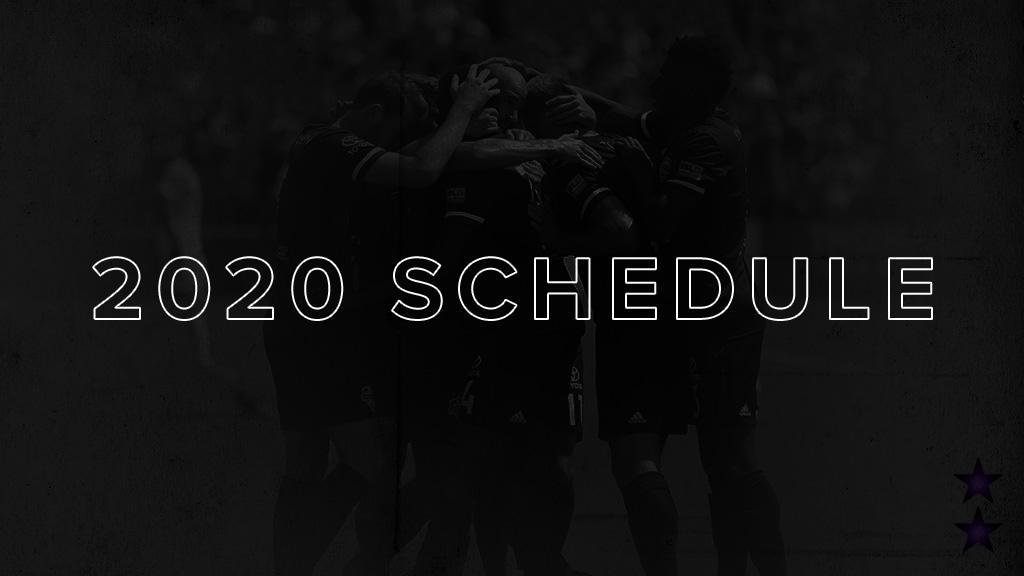 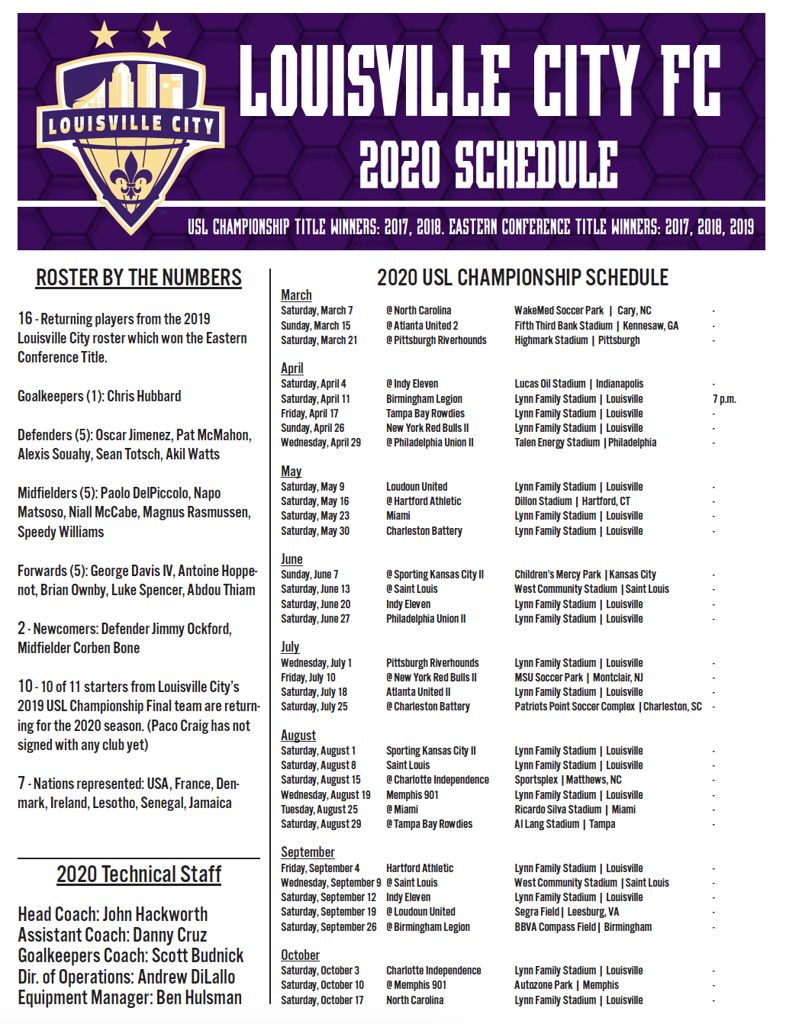