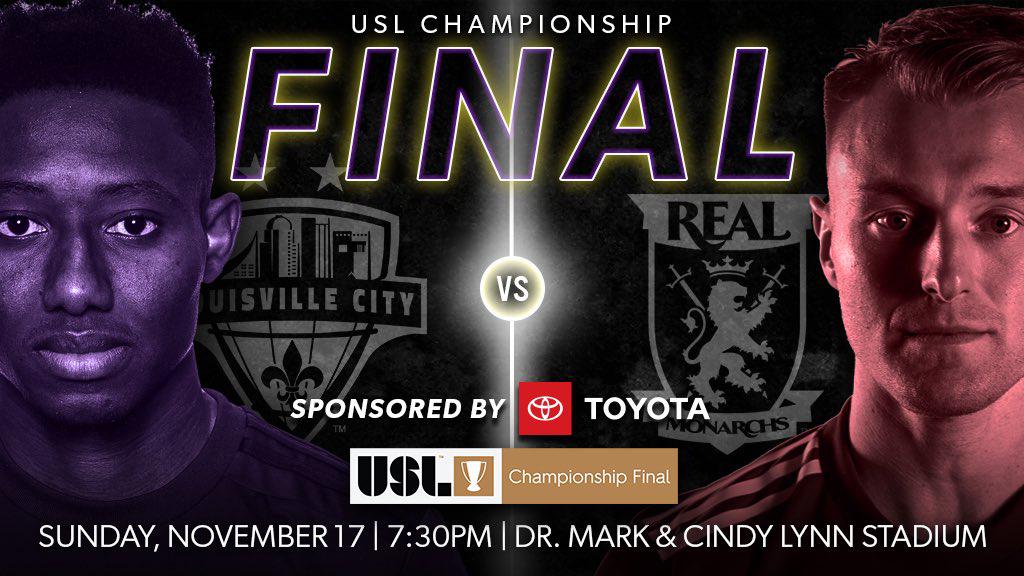 Louisville City FC hosts Real Monarchs in the USL Championship Final Sunday night in Dr. Mark and Cindy Lynn Stadium. LouCity will be going for its third-straight win in the league's title game, a feat never done before. Kickoff is set for 7:30 p.m.

The Boys in Purple beat Tampa Bay, top-seeded Pittsburgh and Indy Eleven to become the Eastern Conference Title-Winners. For coach John Hackworth's team, the Championship Final is where they always expected to be.

"I think it’s just an expectation really and within our club and particularly within our locker room, it’s just a belief we all have," Hackworth said. "The expectation is that we should be playing in this game and that brings a lot of pressure. It certainly isn’t easy to deal with that sometimes but it that’s credit to Paolo [DelPiccolo] and the rest of that locker room and their ability to work through some really difficult moments this year has been so impressive."

Louisville City wasn't near the top of the table in late July, but a late-season run saw LouCity rise from eighth in the standings to fourth after a final regular-season win over Memphis 901. Then in the playoffs, Louisville City has been the comeback kings, overcoming deficits vs. Pittsburgh and Indy to advance to the Final.

"There were many low points this season but there were many low points the four years that I’ve been here," captain Paolo DelPiccolo said. "That’s just the way it goes. You’re going to drop points. There are ups and downs. There are people that get hurt. There are people that come back. For us, it’s not really a switch that’s flipped. It’s more of just believing in what we’re doing and believing that if we keep sticking to our process, it will come through for us and that we’ll be successful.”

Sunday night is Louisville City's third-straight title game appearance and a chance to bring home their sixth trophy in three seasons (they have three Eastern Conference trophies and a pair of USL Championship Final trophies). It's also a chance to make history as the first American pro club to win three consecutive post-season titles.

"I’m proud to be a small part of that culture, a small part of this club and for the last five years it’s amazing what this club has done," Hackworth said. "Again, just happy to be here with them, but it’s a really special group of men that are in that locker room and I get to work with on a daily basis.”

The challenge will be taking on a Real Monarchs team LouCity has never faced. The Eastern and Western Conference teams don't see each other during the USL Championship season.

"I think it’s going to be really interesting because both teams have to feel each other out a little bit and see what the tactics are like," Hackworth said. "I think it’s very interesting playing in a league where you literally don’t see the other half of the league the entire time and from out experience going through the east and literally in the playoffs, you’re facing your opponent for the third time and now to prepare, it is such a challenge.

"You can only watch so much video. You can go back and compare lineups and different tactics and things. So it is a challenge. It’s an interesting one. I think – I remember the old days of baseball with the National League and the American League play each other in the World Series – I think it’s similar to that.”

Tickets for the Championship Final sold out in just 96 minutes on Thursday as fans snapped up all the remaining seats in Dr. Mark and Cindy Lynn Stadium and even sold out the standing room only tickets.

Kickoff is set for 7:30 p.m. The game will be televised nationally on ESPN2 and ESPN Deportes. The local radio broadcast will be on 790 KRD with simulcasting on 840 WHAS.