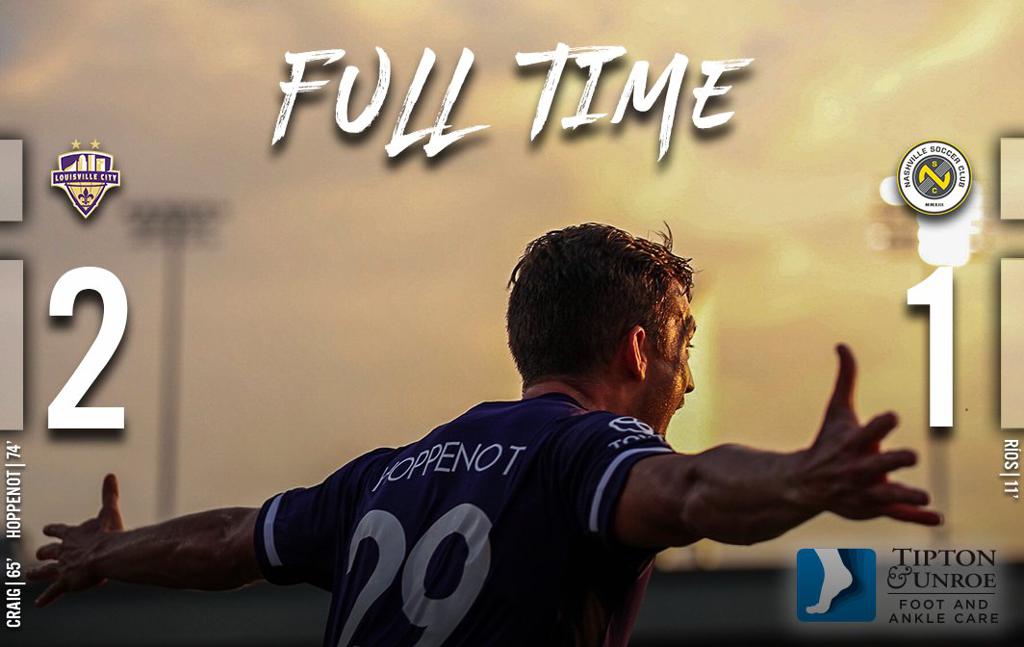 The late goal by Hoppenot proved to be the dagger as Louisville City defeated Nashville SC. LouCity grabbed three points to move even with Nashville FC at 29 points.

“I’d say overall, the word that comes to mind is gutsy performance by us," Louisville City coach John Hackworth said. "I think my players are trying to make me go bald - or grey fast - by giving up another goal early in the game. The response after halftime and coming out trying to get back into the game. Playing LouCity soccer was really nice. ... We have to continually deal with this adversity that’s getting thrown our way, but really proud of our boys. That was an important three points for us.”

Things didn't look good early on. Louisville City, once again, found itself in a hole, as Nashville’s Daniel Rios takes a shot that curled around the outstretched arms of LouCity Goal Keeper, Chris Hubbard, to give Nashville a 0-1 lead.

Time and time again, LouCity had opportunities at the goal in the first half, but could not convert. Luck seemed to swing in the favor of the home team when a foul was called on Nashville in the penalty box in the 41', but Magnus Rasmussen's penalty kick sailed high.

“Maggie (Magnus Rasmussen) is usually automatic on that," Hackworth said. "We had Luke on there, and normally he would've been the guy to take the PK. A pet peeve of mine is when the guy who gets fouled takes it (the PK), I never love that, so as soon as he missed it I was like 'I should've called Luke off,' but Maggie went right to the ball, you know he's very confident. He's very good at those. Those things happen, though."

In the second half, LouCity attempts on the goal continued, but none closer than a perfectly placed cross to veteran Luke Spencer, as he puts a header off the left post in the 58'.

Six minutes later, Oscar Jimenez set up Paco Craig for the equalizer in the 64’, as Craig put it in the back of the net for knot the score at 1.

"Yeah, I saw OJ’s (Oscar Jimenez) position and told him exactly what area I wanted it and he placed it right there," Craig said. "At that point, it was just whoever was more desperate for the ball, and I happened to get enough of it to put it in goal.”

Soon after, Brian Ownby led a breakaway on the left side of the field with Antoine Hoppenot streaking down the right. Ownby planted his right foot and swung his left at the ball to set up Hoppenot for his first goal as a member of Louisville City.

“...Unbelievable cross by Brian Ownby. Honestly, you know he just put it in and all I have to do is really hit it, clean," Hoppenot said. The speedy forward was recently acquired from the Tampa Bay Rowdies for Lucky Mkosana. "… After I scored I think I blacked out for a little bit because that’s probably one of my top goals in terms of emotional goals. ... Coming here and starting off like this it's emotional for me... to hear the crowd go wild it is fantastic.”

Hackworth praised Hoppenot, saying, “I couldn’t draw it up any better. Bringing Antoine Hoppenot here was for that exact play… Antoine’s got a lot of ground to make up, but you see how quick he is and buries it right there.”

The Boys in Purple will head up to Canada to take on Ottawa Fury FC on Sunday, July 14, at 2 p.m. EST.