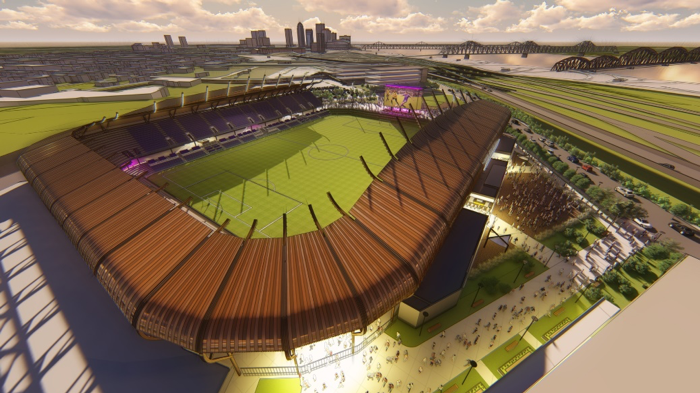 Louisville City Football Club is excited to extend today an invite to the public for LouCity's groundbreaking ceremony to be held at 3:00 p.m. on Thursday, June 28 at the Butchertown stadium development site.

The groundbreaking ceremony comes off the back of LouCity receiving the final TIF from the Commonwealth earlier in the month of June. The ceremony will be held the day after LouCity hosts Pittsburgh Riverhounds SC before welcoming New York Red Bulls II to town on Saturday night.

Public interested in attending are encouraged to arrive by 2:30 p.m. with parking available in the construction lot and along Cabel Street. Come celebrate this incredible achievement by our ownership group on a remarkable afternoon with Louisville City FC. This Thursday, we take a vital step in shaping our future!

See below for more information.

WHAT: Louisville City Football Club will hold a groundbreaking ceremony for its new 11,300-seat stadium.

WHERE: Stadium site in Butchertown at Cabel and Adams streets.

SUMMARY: Louisville City FC will hold a groundbreaking ceremony June 28 at 3 p.m. at the site of its new stadium. Dignitaries and the public will be invited and asked to wear purple and arrive no later than 2:15 p.m. Metro Council member Barbara Sexton Smith, whose 4th District includes the stadium site, will emcee the event. Speakers will be Governor Matt Bevin, Mayor Greg Fischer, Metro Council President David James and LouCity head coach James O’Connor. Metro Council members, LouCity board members, LouCity owners and other invited dignitaries will participate in the turning of dirt. #WeDigLouCity.