The boys in purple set the tone early on a historic night. 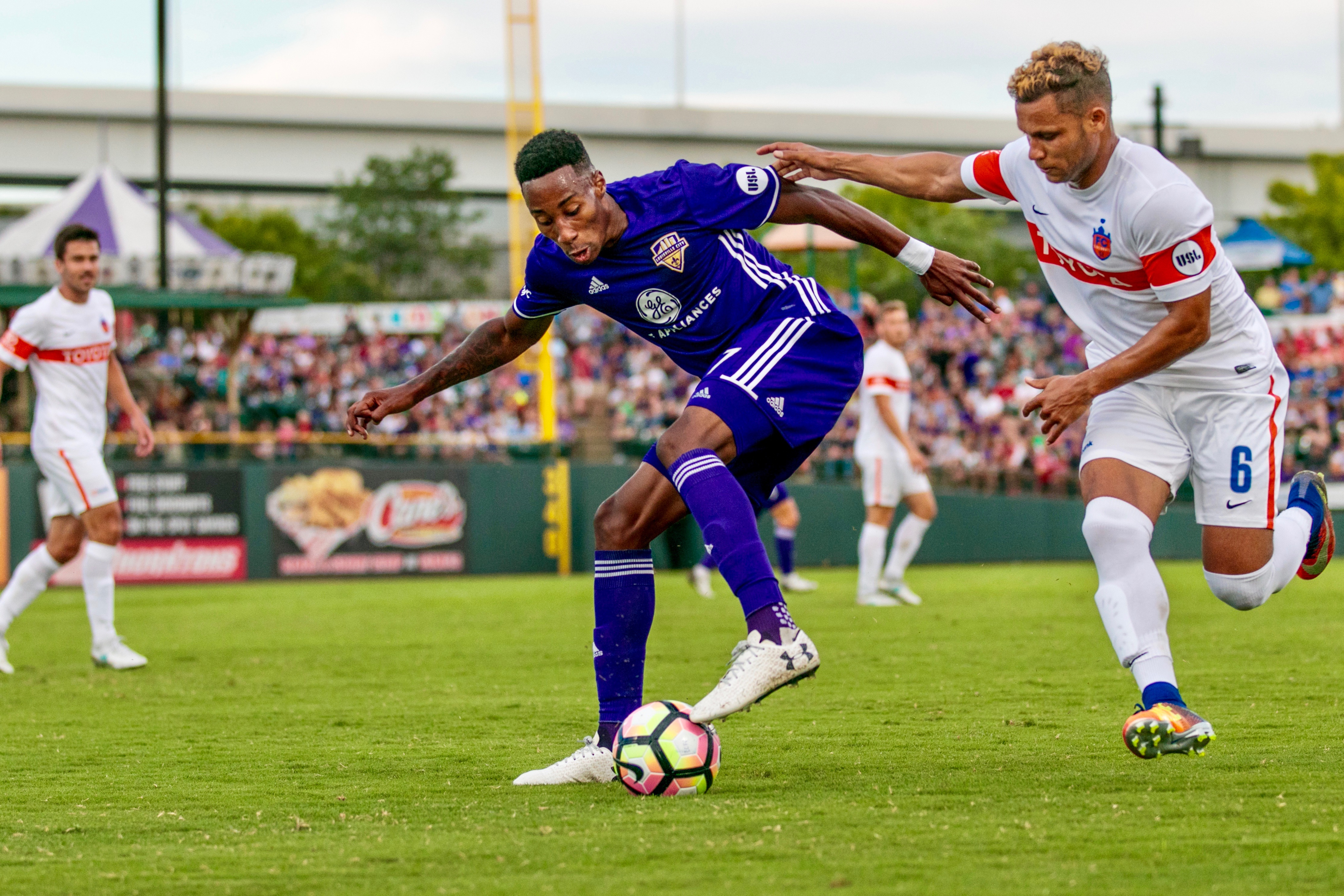 Louisville City FC’s players and coach James O’Connor lamented the result the last time they played in front of a club-record crowd — also against rival FC Cincinnati. But the boys in purple more than made up for it Saturday night.

Niall McCabe’s headed goal in the 16th minute set the tone in a 5-0 LouCity win over FC Cincy, one enjoyed at Slugger by a raucous, capacity crowd of 13,812.

Luke Spencer, Mark-Anthony Kaye, Richard Ballard and Sean Reynolds added goals of their own in a victory that awarded LouCity the two clubs’ River Cities Cup; other regular-season results were a 1-1 draw April 22 in Cincinnati before a 3-2 FC Cincy win July 15 at Slugger.

Spencer, a Cincinnati native, stood out in particular, notching two assists in his Man of the Match performance. Both passes followed a key moment in the game — in the 36th minute — as FC Cincy’s Set de Wit dragged the striker down from behind before assessed a red card.

LouCity out-shot its rival 30-8, placing half of them on target. The boys in purple also created chances from 10 corner kicks to FC Cincy’s one. Possession leaned 55.5 percent in favor of the hosts.

“That’s how you draw it up, really,” Spencer said. “We had played them, that was the third time we played them. We had talked about playing our best, wanting to give them our best performance and we didn’t feel like we really did that before and tonight we felt like they got our best shot.”

The victory continued a trend for LouCity, which has followed all four of its losses this season with a victory. The club fell by a 3-1 score last week to USL Eastern Conference leader Charlotte but on Saturday pulled to within two points — and with a pair of games in hand.

A win appeared imminent from the start as LouCity worked in Cincinnati’s half, controlling the ball. Kaye featured on the right wing with McCabe on the left, and defender Kyle Smith, another Cincinnati product, wore the captain’s armband for the first time.

Smith put a header on frame in the eighth minute, and Kaye followed with another shot Cincinnati keeper Mitch Hildebrandt had to save. From there, the rout was on, as eight minutes later Sean Totsch looped a cross into the box, finding McCabe for the go-ahead goal.

“It was a really good ball in, and I just saw it was kind of a big gap there that I should probably get into before James has a word with me if I didn’t,” McCabe said. “So I managed to get in there and managed to get good contact on it, and that’s probably the first time I headed a ball in about seven years — so thankfully it went in. Really happy.”

Spencer doubled the lead in stoppage time before the half, and the scoring strikes continued in the second. O’Connor’s three substitutions were all attacking-based, including that of Ballard, the Louisville native who found the back of the net four minutes after brought onto the pitch.

Off its most lopsided win of the season, LouCity will have a long week to prepare for its next test, a Sunday, Aug. 20, game at Bethlehem Steel. Kickoff is set for 5 p.m. with WMYO-TV and NewsRadio 840 WHAS set to broadcast locally.