The outside back from Versailles, Ky., is no stranger to the first team. 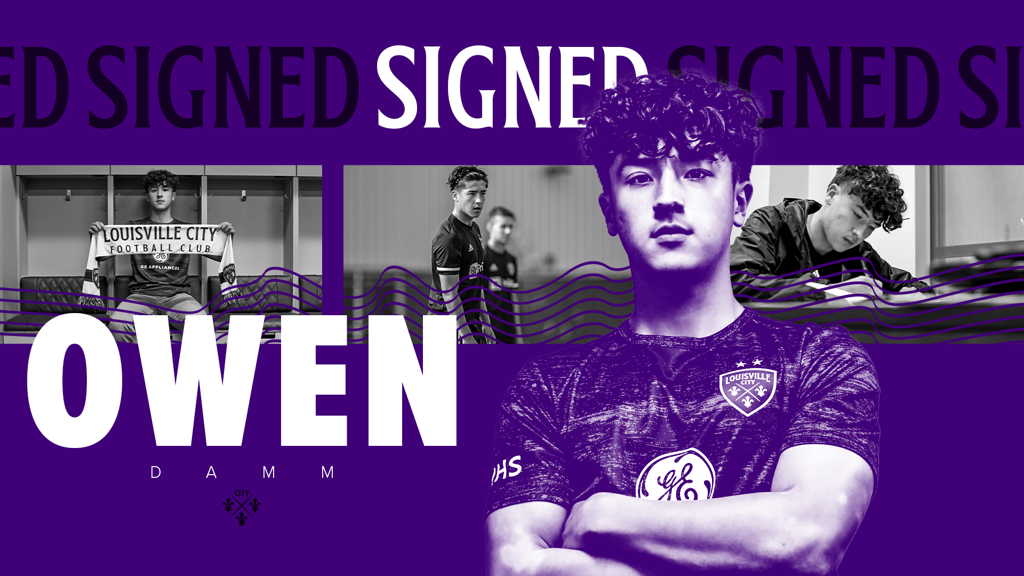 Continuing to illustrate opportunities presented by its youth academy system, Louisville City FC has signed defender Owen Damm to a contract that includes an academic scholarship, the club announced Tuesday.

An 18-year-old from Versailles, Ky., Damm — whose last name is pronounced “dom” — familiarized himself with the first team last season while on a USL Academy deal preserving amateur status. Rather than accept a traditional college offer, the outside back is turning professional at LouCity and will continue studying through Bellevue University, the United Soccer League’s Official Education Partner.

Other terms of Damm’s agreement, which is pending league and federation approval, weren’t disclosed.

"I've been following Owen for a long time within our academy, and I've observed him often in training with our first team,” said head coach Danny Cruz. “He’s a young player who has an extremely high ceiling, and we're looking forward to watching his development in the professional setting.

“I'm thankful for the work that Mario Sanchez, Luke Spencer and the rest of our academy staff has done to get Owen ready for this opportunity. It's been really impressive to see his growth over the last couple of years. He has an exciting future ahead.”

Damm is the fourth member of LouCity’s academy to sign a pro deal over the last year following brothers Elijah and Josh Wynder, plus Carlos Moguel Jr.

A Woodford County High School graduate, Damm three times made all-state lists, including a first team spot in 2020, and helped his school to a trio of district titles from 2019-2021. His amateur career finished with a 48-goal season in 19 games this past fall. That ranked him third in Kentucky in scoring and evidenced his attacking prowess.

“The scholarship made the decision easy, but there’s also nowhere I’d rather be than Louisville. I love it there — the club and city,” Damm said. “I had college options, but my goal is to be a professional and that opportunity came, so I took it.

“Training with LouCity last season allowed me to get a really good feel. There’s nothing better to learn from than experience. I also got to see how players carried out their everyday lives, and it’s going to be easier making this transition with academy teammates on the squad.

“As far as my playing style, I like to get forward on the field and impact the game offensively. Being a midfielder originally, getting up the field is natural for me.”

Damm’s parents, Heechung Ko and John Damm, recently joined him to put pen to paper on his LouCity contract at the Lynn Family Sports Vision & Training Center. The new pro intends to study sports management through Bellevue University, which per its agreement with the USL provides a full scholarship to each team with this type of opportunity in mind.

Founded in 1966, Bellevue University is one of the country’s top 20 online universities and has nearly 60,000 graduates worldwide. The Nebraska-based institution further invested in the USL after forming a local partnership with League One club Union Omaha that focuses on providing player and front office educational opportunities.

“As a dad, it’s incredible to see this opportunity for Owen,” John Damm said. “There’s a lot of people who helped — all the coaches, teammates, opponents and everyone along the way who played a part in this. We can’t thank Louisville City enough. It’s hard to put into words these feelings.

“It was our goal to see our kids pursue their dreams, and Owen’s living his dream right now. We’re still processing this. Financially, it’s huge for our family, and this club’s going to help turn Owen into a man. We’re just overwhelmed and thankful.”