The boys in purple bowed out with a 3-2 defeat at Al Lang Stadium. 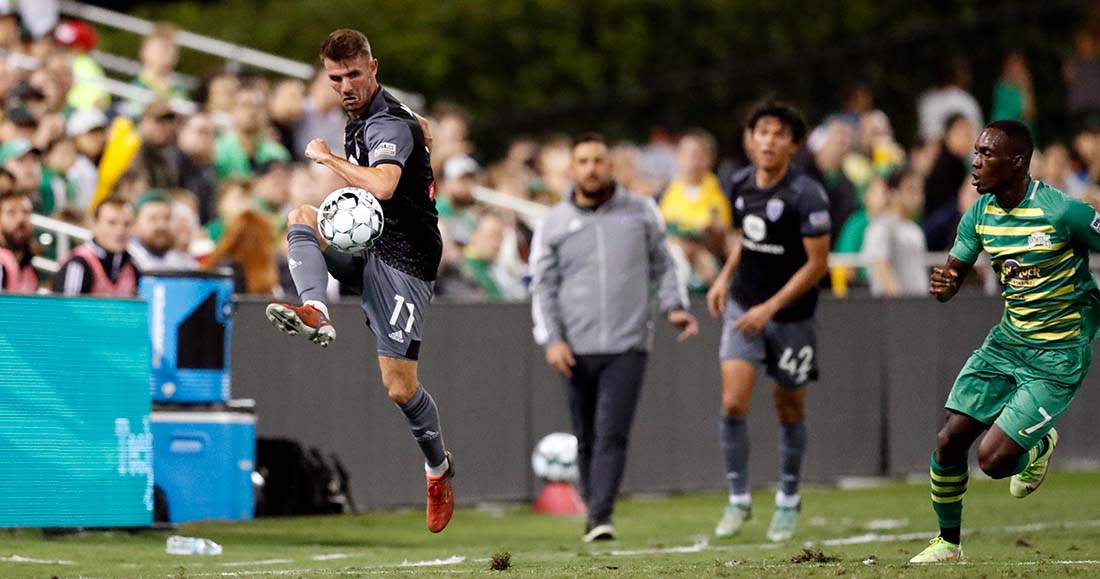 Courtesy of Matt May Photography

Louisville City FC, seconds away from exacting some Eastern Conference Final revenge Saturday night, instead fell to the Tampa Bay Rowdies for a second straight season in the USL Championship’s national semifinal round.

Super sub Lucky Mkosana’s header six minutes into second half stoppage time equalized, and the Rowdies went on to win by a 3-2 score in extra time at Al Lang Stadium in St. Petersburg, Fla.

“It’s difficult to lose that way, obviously,” said coach Danny Cruz. “I’m thankful to all of our fans that made the trip down. Sorry the game ended the way that it did. I’m extremely thankful to this group of players and everything they’ve given me this year. Obviously to lose the way we did, it’s going to hurt for a long time. There’s no doubt about it.”

It was a heartbreaking end to an otherwise successful season for LouCity, which raced out to a 2-0 halftime lead. Brian Ownby tapped in a 10th-minute Oscar Jimenez free kick, and Paolo DelPiccolo’s 24th-minute cross in from the left wing led to a Tampa Bay own goal to double the advantage.

“It was great to get two goals in there, but I think we decided to let them have the ball too much at the end of the first half,” said defender Oscar Jimenez. “And then the whole second half, I thought we just stayed back and let them get comfortable having the ball. That’s really dangerous when you play a good team.”

Mkosana netted his first goal seconds after coming on, maximizing on a half clearance by the LouCity defense in the 83rd minute. Similarly, the boys in purple couldn’t thwart an extended Tampa Bay attack deep into stoppage time that led to an Mkosana header pulling Rowdies level.

Steevan Dos Santos delivered the game winner 102 minutes into a contest that sent Tampa Bay on to the Sunday, Nov. 28, USL Championship Final.

That made a bitter end for City, in the midst of a seventh straight Eastern Conference Final bid in as many seasons. The Rowdies last year registered a 2-1 victory at this same stage of the season at Lynn Family Stadium.

The boys in purple had multiple chances to force penalties with Jimenez skimming one late shot over the bar before Rowdies goalkeeper Evan Louro stopped another.

So finished a season in which LouCity won the USL Championship’s Central Division, earning a top playoff seed on the campaign’s final weekend. The boys in purple prevailed by 1-0 scores in the Eastern Conference Quarterfinal (Miami FC) and Semifinal (Charlotte Independence) rounds.

It will, however, be until at least 2022 that the club can look to add a much-desired third star over the crest following USL Championship titles in 2017 and 2018.

“I hope the players remember every single moment from shoveling snow in early (February) to now,” Cruz said. “We’ve been through a lot together, and when it ends this way, you certainly feel like it’s a gut punch. My hope is that we’ll remember this moment going into next year and certainly try to do a better job of closing out games and getting back to lifting trophies as this club deserves.”

Man of the Match: Chris Hubbard