The club will play for a trophy next weekend in a rematch with the Tampa Bay Rowdies. 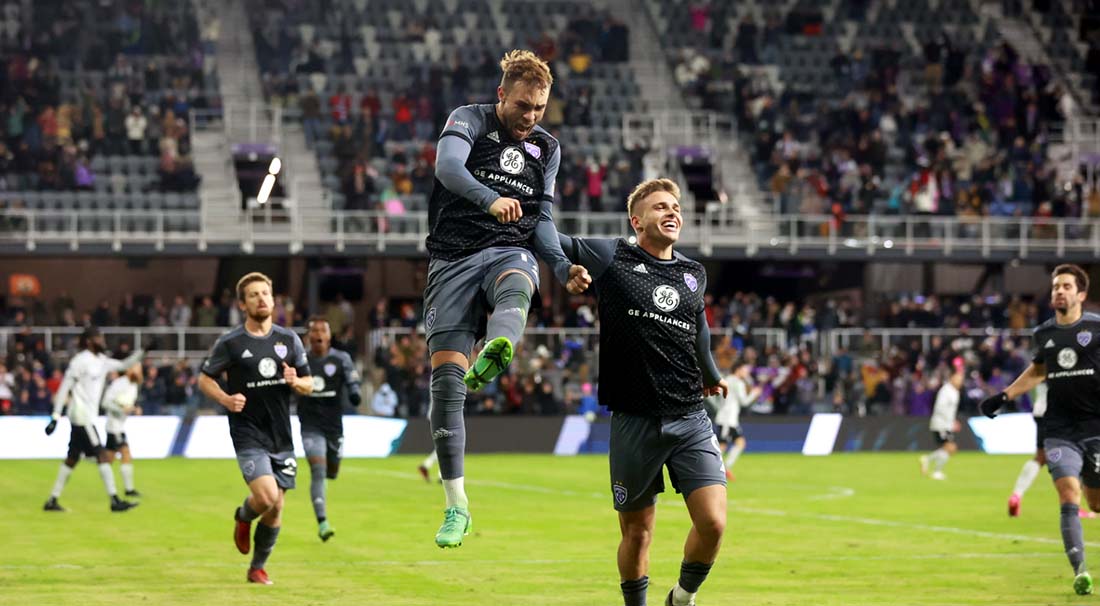 Cameron Lancaster came up in the clutch Saturday for Louisville City FC, drilling an 89th-minute penalty kick to send the club on to yet another USL Championship Eastern Conference Final appearance.

The boys in purple prevailed by a 1-0 score over the Charlotte Independence at Lynn Family Stadium, setting up a rematch of the 2020 conference final. It’ll be a 7:30 p.m. kickoff next Saturday against the Tampa Bay Rowdies at Al Lang Stadium.

Left back Jonathan Gomez led to the game-winning moment while working on the edge of Charlotte’s box. The Independence’s Joel Johnson went for a sliding tackle, and rather than contact the ball with his foot, it bounced off his trailing arm.

Seconds later, Lancaster stepped up with a thundering strike to mark his team-leading 21st goal across all competitions this season.

“It’s the playoffs,” added LouCity captain Paolo DelPiccolo, “and we’ve got this awesome stadium that keeps the noise, and the fans are going. So for us it’s a really uplifting feeling and it gives us the energy we need. No one gets tired out there. It’s a really awesome experience playing here.”

As a result, LouCity will vie for its seventh conference final in as many seasons since starting play in 2015. The club is a win away from a third Eastern Conference crown and has won two USL Championship titles, going back to back in 2017 and 2018.

“You don’t see that all around the world — that is for sure,” Cruz said of the appearance streak. “I think it is a testament to the organization, to everything that everybody does here at Louisville City every day. That is from the back office to the players. It is the collective goal that the entire club has. To be able to do that year in and year out is certainly special.

Lancaster’s conversation capped a night of close chances but no finishing touch for LouCity, which tried all 13 of its shots from inside the box. Five landed on target, four others were blocked, and the home side in the process controlled 55.1% of possession.

A crowd of 9,155 — a LouCity record for a home conference semifinal — hung on every moment. Those included a nice 33rd-minute sequence that saw Lancaster slide a shot just wide of the post; a 57th-minute DelPiccolo flick that commanded a save; and point-blank Jorge Gonzalez shot also turned away in the 65th minute.

At the other end of the pitch, goalkeeper Chris Hubbard delivered in every moment, making five saves and punching away two other Charlotte chances. The clean sheet was LouCity’s season-high third straight with this also the club’s third consecutive 1-0 score line.

LouCity's one of four clubs left playing in the USL Championship — along with Tampa Bay, which defeated the boys in purple in last year’s Eastern Conference Final.

“I’ve watched them play quite a few times this year only because they’ve been doing well,” DelPiccolo said of next weekend's foe. “Obviously they’re a good team and they’ve got good players through and through. So, for us it’s just another challenge.”

“It’s an opportunity to play for a trophy,” Cruz added. “That is what this group has done year in and year out. This is just another opportunity. We understand the stakes. We understand what it takes to accomplish that. I am confident in the group of guys that I have in there.”

Regardless of the Western Conference Final’s result, the LouCity-Tampa Bay winner will host the USL Championship Final at 8:30 p.m. Sunday, Nov. 28.