Here's what you need to know as the boys in purple ready for Saturday. 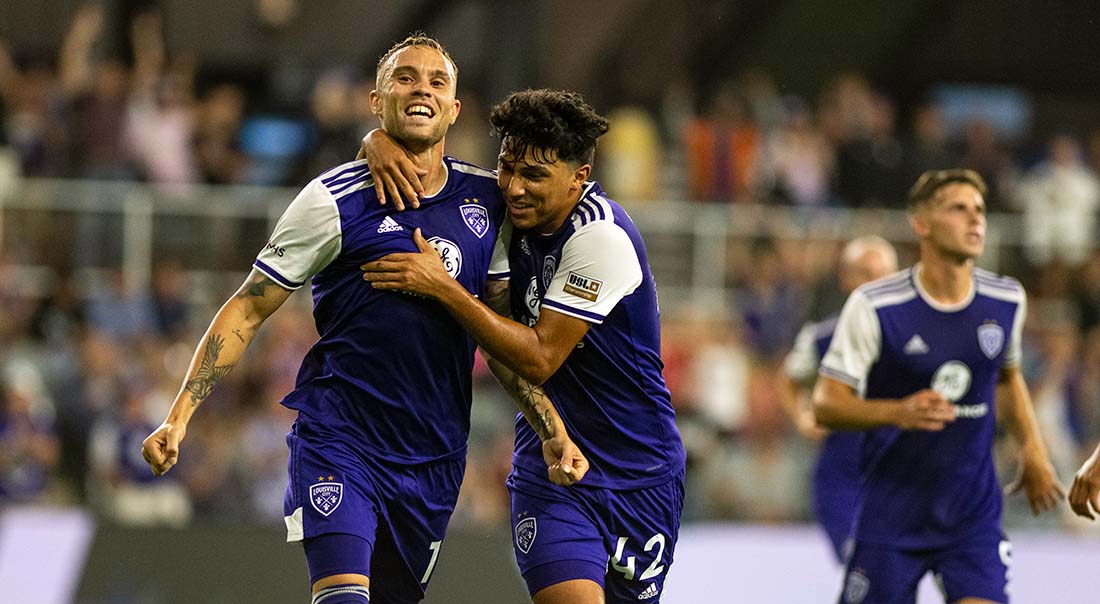 Louisville City FC will officially start its run toward a third USL Championship title at 8 p.m. Saturday inside Lynn Family Stadium, hosting Miami FC in the Eastern Conference Quarterfinal round.

Sixteen teams — four apiece from the Atlantic, Mountain, Pacific and LouCity’s Central Division — qualified for the single-elimination playoffs. Games run each weekend leading up to the final at 8:30 p.m. Sunday, Nov. 28, on ESPN.

Already the only USL Championship club to win consecutive titles in the league’s modern era (2017-2018), LouCity is looking to become the first to raise the trophy three times in all. Additionally, City enters the 2021 playoffs on a six-year streak of advancing to at least the Eastern Conference Final, doing so every season since the team launched.

After 32 regular season games, we’ve learned plenty about these boys in purple. The high points as the postseason begins:

As the Central Division’s No. 1 seed, LouCity will open against No. 4 Atlantic Division seed Miami FC — a squad that includes former club standouts Devon “Speedy Williams, Paco Craig and Louisville native Richard Ballard. The advancing side will host the winner of Memphis 901 FC (No. 3 Central) at the Charlotte Independence (No. 2 Atlantic).

Based on regular season point totals, LouCity would have to travel to play only one Eastern Conference team, the Tampa Bay Rowdies, should they meet in the conference final. On the Western side of the bracket, Phoenix Rising and El Paso Locomotive have the points edge on the boys in purple should they eventually match up in the USL Championship Final.

FiveThirtyEight.com gives LouCity a 13% chance of adding a third star to its crest as the third choice behind Phoenix (21%) and Tampa Bay (15%). Additionally, the stats-based projection rates the boys in purple with a 47% chance of continuing what is a USL Championship-record conference final appearance streak.

Why’s playing at Lynn Family Stadium so coveted by LouCity? The record speaks for itself. The boys in purple have played to the league's largest home crowds this season — an average of 10,088 — and lost just once since capacity restrictions were removed in June. Over that span, the club has out-scored visitors by 18 goals while posting a 10-1-1 record.

LouCity finished with the league’s third-best record newly under the direction of 31-year-old Danny Cruz, who took on the head coaching role one game into the season and in October had the interim tag removed. Not long removed from his playing career, Cruz led a side that scored 61 regular season goals, second in the league, and ranks second defensively with 0.99 expected goals against per game.

That’s largely the case entering the playoffs after Cruz’s side dealt with a number of adverse situations throughout the season. In addition to longer-term injuries suffered by Corben Bone, Jorge Gonzalez, Oscar Jimenez, Abdou Thiam, Josh Wynder and Wes Charpie, the boys in purple dealt with their knocks. Midfielder Tyler Gibson returned to the pitch in the season finale, leaving Napo Matsoso as the only player officially “out” on that most recent injury report.

That’s nothing new, of course, but striker Cameron Lancaster continues to produce in the first of a multi-year deal agreed to with LouCity last offseason. Lancaster poured in 20 goals three years after his 25 set a new USL Championship record and won him the Golden Boot. The Englishman might have challenged his own mark had he not been among those injured and limited to 25 appearances.

Aside from Lancaster, LouCity’s attack has been buoyed by a pair of veterans having standout campaigns. University of Louisville product and team captain Paolo DelPiccolo scored a personal-best nine goals in a more advanced role in the formation, while winger Brian Ownby numbered a career-high 11 assists, one off the USL Championship lead.

Jonathan Gomez, who’s set to transfer to La Liga’s Real Sociedad at the end of the season, rose to national prominence in 2021. The dual-national outside back may also have a future on either the United States or Mexico national team given his pace, left-footed ability and youth, tallying 8 assists and 2 goals during a season in which he just turned 18.

Defender Sean Totsch, fresh off a First Team All-League season in 2020, featured in central defense in every regular season game as the club's only player to appear all 32 times. Totsch was also the club’s minutes leader at 2,880 played — 600 more than the second player on the list as he led the squad in duels won (181), clearances (93), interceptions (42) and blocked shots (9).