Lancaster scores at the death to rally LouCity past SKC II

The boys in purple prevailed in a game that included four goals after the 85th minute. 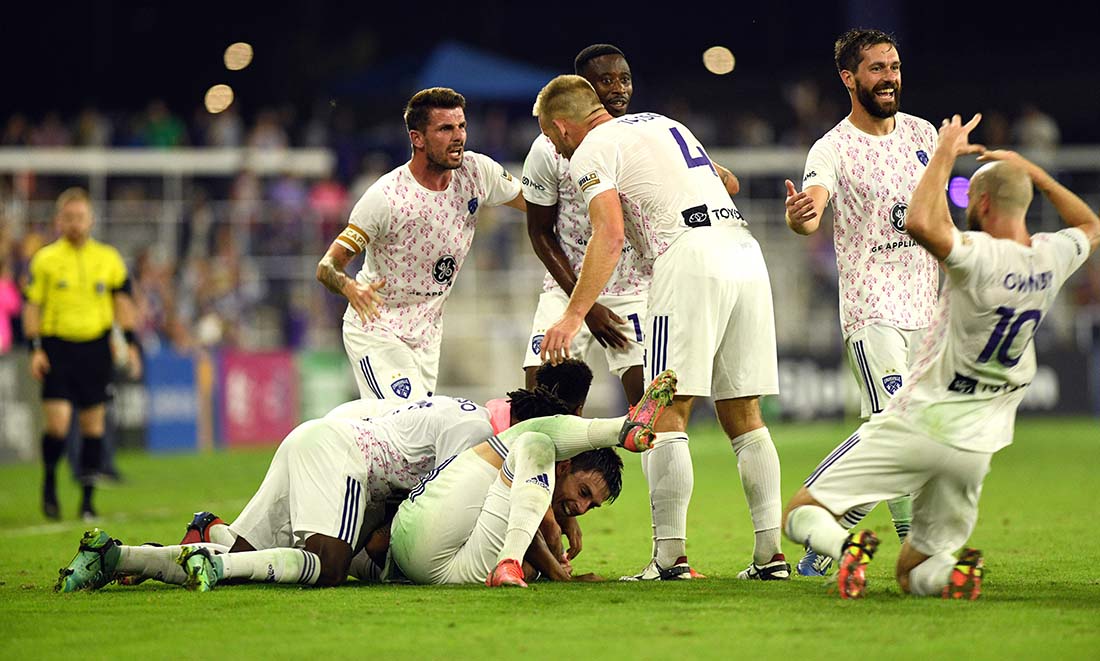 While Cameron Lancaster may have a foggy recollection of the final moments from Saturday night’s game, some 10,726 fans figured to leave Lynn Family Stadium following a finish they won’t soon forget.

Lancaster got on the right end of a free kick at the death to cap a frenzied comeback for Louisville City FC, which rallied to win for the first time all season with a 4-3 victory over visiting Sporting KC II.

SKC II — having trailed 2-0 in the first half — scored in the 84th and 85th minutes to lead the top team in the USL Championship’s Central Division. But LouCity answered, getting a goal from Oscar Jimenez to equalize before Lancaster’s heroics, and smoke poured.

“It’s hard to digest at the moment," Lancaster said. "Honestly, it was a lot of emotion, and we shouldn’t have gone down the way that we did, but great belief from the guys to fight back. The goal was a bit of a blur because I saw the ball get to my foot and smashed it in. The rest is history.”

As a result, LouCity extended its unbeaten streak to seven games and saw its lead atop the Central Division grow to five points, though second-place Birmingham Legion FC has yet to play this weekend. Four games remain before the playoffs.

The win was in doubt until the final kick, a free kick from the right wing by Niall McCabe. He whipped in a cross that found Brian Ownby at the back post before the ball was guided to Lancaster for a roundhouse-style strike.

"It all happened really quickly, but that’s what Cam does,” said head coach Danny Cruz. “He puts himself into a good spot and got another few goals tonight. Brian does a great job of heading it across and, again, another great delivery from Niall.

“I was at a little bit of a loss for words because the game was pretty wild, but I know one thing, and that’s that I continue every week to be proud to be the manager of this group.”

The boys in purple were scrapping for any sort of result after conceding twice in the game’s final 10 minutes and surrendering a lead they’d held since Paolo DelPiccolo knocked in an eighth-minute goal.

In response, Cruz brought in forward Abdou Thiam and shifted to an offensive shape that put Jimenez in a wingback role. Minutes later, Thiam directed a ball across the box for Jimenez to open the rally.

"I was really proud of the staff when had to make some quick decision collectively to make the subs that we did," Cruz said. "I can’t even tell you what was going through my head because it was a blur.”

Before pandemonium ensued on the pitch, it looked to be another ordinary LouCity result. Lancaster covered a 30th-minute penalty kick earned by Ownby, and though the visitors got one back on a shot from distance in first half stoppage time, they weren’t overly threatening.

Comfortable with its lead, LouCity saw the advantage disappear quickly.

“I said to the players that there is real value going through what we just went through," Cruz said. "To respond the way that we did, it would have been very easy to crumble, and we didn’t — especially when you start thinking about playoffs and needing late goals at times.

“There’s real value in it, and I’m really proud of the group. Certainly, we need to go through the tape and fix a few different areas when you concede that many goals at home, but to win the game I’m really proud.”

Saturday’s victory ensured a season, four-game sweep of Sporting KC II. LouCity is undefeated dating back to Sept. 3 as it jockeys for positioning heading into the playoffs. The next opportunity comes Wednesday at Memphis 901 FC with kickoff at 8 p.m. ET.