With a playoff spot clinched, it's all about improving point totals for the postseason. 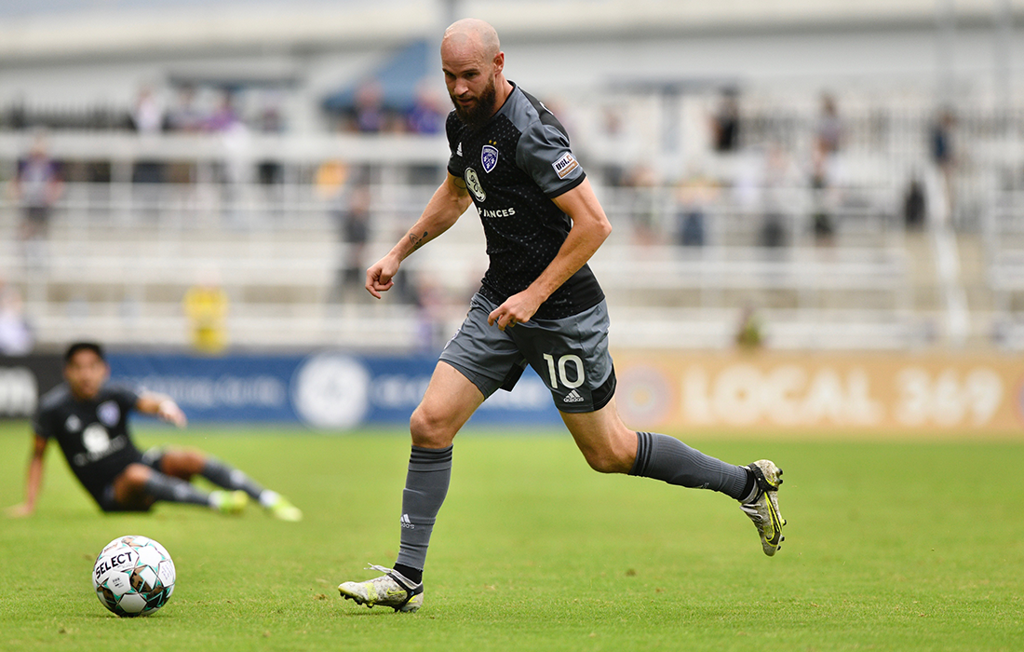 On Saturday, the boys in purple will continue gearing up for another postseason run when they host a Sporting KC II side that already knows its fate, having been eliminated previously from playoff contention.

Ahead of kickoff — 7:30 p.m. at Lynn Family Stadium — LouCity sits 15-5-7, two points clear of Birmingham Legion FC atop the Central Division standings. Sporting meanwhile is 4-15-8, eighth of as many teams on the table.

The boys in purple hold a 3-0 series lead over SKC II with a combined +6 goal differential after two visits to Children’s Mercy Park and a prior victory at its home Lynn Family Stadium.

Including Saturday’s showdown, only five regular season games remain for LouCity to tune up for the playoffs in search of a third USL Championship title following prior trophy raises in 2017 and 2018.

Here’s more of what to watch for…

Seven straight: The hunt is officially on for a third star. LouCity, established in 2015, is now 7-for-7 in playoff trips, a streak topped in league history only by the long-tenured Charleston Battery (10 straight appearances from 2011-2020) and Sacramento Republic FC (eight straight from 2014-2021). Louisville remains the only club to have won back to back USL titles.

Playoff structure: The 16-team postseason kicks off the first weekend in November and leads up to a Nov. 28 final to air on ESPN or ESPN2. Eight teams apiece from the Eastern and Western conferences will sit on either side of the bracket. Better seeds host opening-round games, while clubs touting higher point totals get home advantage in ensuing rounds, meaning there’s plenty left for LouCity to play for the rest of this regular season.

Keep climbing: Despite its current unbeaten streak, LouCity has a bit of a mountain to scale in order to reach the top of the league by the season’s end. The boys in purple have accumulated 52 points, trailing Phoenix Rising FC’s 59 and the Tampa Bay Rowdies’ 58. The prediction site FiveThirtyEight.com ranks those clubs’ chances of winning the title as Phoenix (22%), Tampa Bay (20%) and LouCity (14%).

Defense on lock: LouCity's back line continues to be among one of the USL Championship's best, sitting second out of 31 teams in xGA (expected goals allowed) at .95 per 90 minutes, just barely off league-leading Tampa Bay. Sunday's performance spoke to that stat as LouCity saw eight shots taken against by New Mexico, but only one landed on target.

Super subs: Cruz has spoken often this season about his club’s depth. It was on display Sunday as a pair of 68th-minute subs create the club’s third and final goal. Seven minutes after coming on, defender Pat McMahon recovered possession in the midfield and slotted a pass to forward Jimmy McLaughlin, whose long run down the left wing — paired with some fence footwork — helped him put the ball in the back of the net.

New faces: Sunday's New Mexico game marked the last of four cross-division contests for LouCity in 2021. The boys in purple went unbeaten in those, also defeating San Diego Loyal and Hartford Athletic. They drew at Colorado Springs Switchbacks SC back in July, conceding late to get a 1-1 result on the road.

Fresh OJ: LouCity's all-time assist leader, Oscar Jimenez, returned to the score sheet Sunday for the first time since an early season knee injury sidelined him until the end of the summer. Jimenez fed an assist in to Paolo DelPiccolo in the 14th minute to, at the time, give his side a 2-0 lead. It marked Jimenez’s 30th assist in purple.

PdP approved: Speaking of DelPiccolo, the team captain — and former University of Louisville standout — continues to impact play in the final third. He scored twice in six minutes early against New Mexico to up his season goal tally to a career-high seven. It marked DelPiccolo’s second brace following another two-goal performance in the April 24 season opener.