Bell: What we learned from LouCity's win over New Mexico United

The boys in purple were efficient in their attack thanks to a super sub. 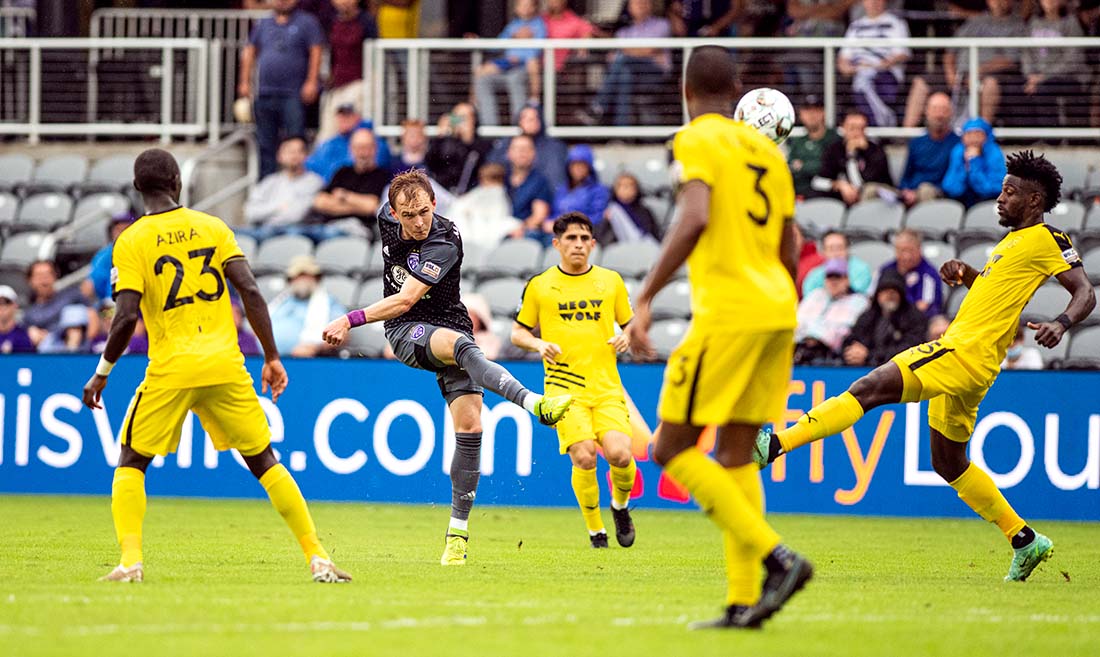 Team captain Paolo Delpiccolo netted twice in a span of six first half minutes before New Mexico’s No. 10, Amando Moreno, cut into the lead just before the break. Super sub Jimmy McLaughlin then made his third goal of the season an important one, scoring in spectacular fashion when he skimmed a defender with a step-over and powered the ball into the bottom right corner seven minutes after coming on.

LouCity will be pleased with the result of its last cross-divisional game of the regular season, with the three points also ensuring a spot in the 2021 USL Championship playoffs. Yes, City’s hopes of ending the season with the league’s highest point total are dwindling. But this victory did bolster positioning in the Central Division with a two-point lead over second-place Birmingham Legion FC.

“It’s the end of a difficult five to six games where we were traveling, so finally being able to be home here in front of our fans, there’s nothing better,” said head coach Danny Cruz. “I was really proud of the group. I thought it was an excellent 44 minutes in the first half. We conceded one shot, maybe two in the first half. It’s three points and there’s no better feeling.”

Here’s more of what we learned Sunday…

But the boys in purple were much more efficient in the attack, numbering six shots on target to New Mexico’s one. Simply, LouCity appeared to create higher quality chances, with most of those looks from inside the box. Expected goals (goals expected by each team based on the quality of chances) proves the same as LouCity had 2.23 expected goals compared to New Mexico’s 0.92 expected goals.

Cruz’s substitutes seemed to make the difference as multiple chances from New Mexico looked likely to tie the game. McLaughlin, who scored minutes after stepping on the pitch, killed New Mexico off with an assist from another sub, Pat McMahon, who won possession in the midfield to lead to the strike.

Together, the substitutes recorded three clearances and gained possession of the ball seven times.

“We closed the game out really well. I was really proud of Jimmy,” Cruz said. “He came on — we talked about the guys in the locker room that aren’t starting the game, it’s important you come on and change the game, and Jimmy helped us out there.”

DelPiccolo offered similar thoughts: “I think the guys that came off the bench made a massive impact. Obviously Jimmy coming in and scoring that goal changed the game, and it was a very important goal to score.”

After two goals in the span of seven minutes, we know that DelPiccolo’s offensive movement sets up dangerous chances. LouCity’s crossing ability easily takes advantage of teams with weaker fullbacks. This is partly due to City’s depth in wide areas with the likes of McMahon, Antoine Hoppenot, Brian Ownby, Oscar Jimenez and Jonathan Gomez whipping in crosses.

Still, when LouCity’s winning, complacency can be a type of kryptonite. Poor marking can be blamed for New Mexico’s sole goal, as Moreno scored on a trailing run after a teammate got to the end line to feed him. The New Mexico forward was also unmarked in the box for a second half cross that could have tied the game, but goalkeeper Chris Hubbard managed to get a fingertip on it to soar of the bar.

McLaughlin, who noted LouCity is still pushing for more clean sheets, wrapped up the day’s thoughts by saying, “This organization has extremely high expectations, and we want to finish at the top of the table and carry that momentum into the playoffs. It’s a great first step [clinching a playoff spot] and we can continue pushing here to achieve the goals we’ve set for ourselves."