The boys in purple are guaranteed a postseason spot for the seventh straight year. 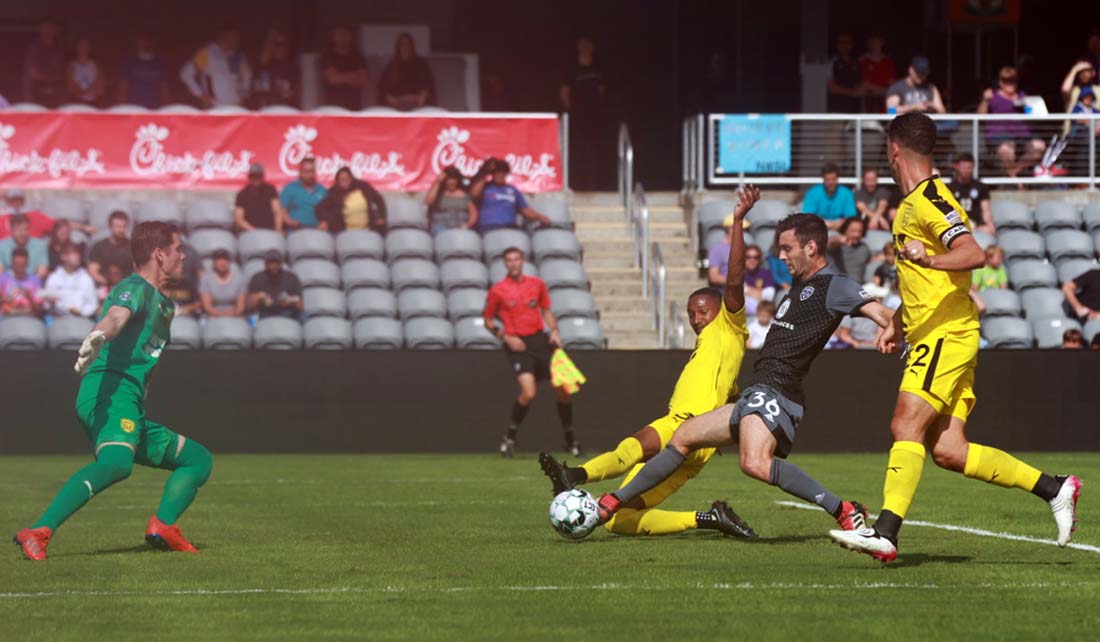 Paolo DelPiccolo’s first half brace Sunday led Louisville City to a 3-1 win over visiting New Mexico United and gained the points necessary for the boys in purple to clinch their spot in the 2021 USL Championship playoffs.

It will be a seventh postseason trip in as many seasons for LouCity, which is aiming to add to the trophy case. The club has so far won two USL titles and hoisted three pieces of Eastern Conference hardware.

First, five key regular-season games remain to solidify positioning into the playoffs. A victory Sunday also moved LouCity back atop the Central Division table, with the top-two sides in line to host their opening-round games.

“It doesn’t change anything,” DelPiccolo said of LouCity’s playoff qualification. “I didn’t even know we clinched. That’s never our goal here… The objective is to win every game: regular season, playoffs, everything. So we keep going ahead.”

DelPiccolo had some 10,349 at Lynn Family Stadium on their feet early, scoring his career-high seventh and eighth goals of the year in a span of six minutes. In the eighth minute, he tapped in an Antoine Hoppenot cross from the left flank; in the 14th, it he finished off Oscar Jimenez’s similar service from the right.

Despite being limited to two first half shots, New Mexico found a way to eat into the lead when Amando Moreno completed a trailing run two minutes into first half stoppage time. Moreno nearly had more on the other side of the break, skying a 65th-minute try when found unmarked in the box before smashing another shot off the bar in the 71st minute.

Not long after, LouCity forward Jimmy McLaughlin turned a tenuous lead for the hosts into a solid one. On a solo run, his 75th-minute scissor move created enough space for a liner through the box, off the far post and in for LouCity.

“We were kinda suffering for a little bit,” McLaughlin said. “They were coming on strong and we were defending a lot. Pat (McMahon) made a great play to kinda win the ball and get it out to me on the counter, and I saw myself isolated with one of the center backs.

“That’s a spot I feel like I thrive in, so, I took my chance, did my move and trusted my shot, and it was nice to see it hit the back of the net.”

With the win, LouCity completed the last of four cross-division games on the schedule. Previously, the boys in purple defeated San Diego Loyal (May 22), drew with Colorado Springs Switchbacks SC (July 23) and won at Hartford Athletic (Sept. 7).

This performance also came in a game when LouCity allowed just one shot on target — the opposing goal — and got McLaughlin’s strike against the run of play. A victory extended LouCity’s unbeaten streak to six games in a return home following five straight away games dating back to a Sept. 3 defeat.

“It’s the end of a difficult, obviously, five, six games when we were traveling so long,” said LouCity coach Danny Cruz. “Finally being able to be home, here in front of our fans at Lynn Family (Stadium), there’s nothing better. So to end these games with a win against New Mexico, really proud of the group.

“I thought it was an excellent 44 minutes in the first half. We concede one shot — maybe two in the first half — and then I think we got a little bit fatigued in the second half. But again, I thought we closed the game out really well. I was really proud of Jimmy — came on and we talk about in the locker room that aren’t starting the game important that they come on and change the game, and Jimmy certainly helped us out there.

“So, really proud of the way we closed the game out after that goal. Certainly, looking forward to the players getting a day off to get their minds and their bodies right as we go to an important October.”

Next up is Saturday’s 7:30 p.m. kickoff against Sporting KC II.