Preview: What to watch for with LouCity at Atlanta United 2

LouCity will continue its fight for playoff contention Wednesday night in their final road game of September. 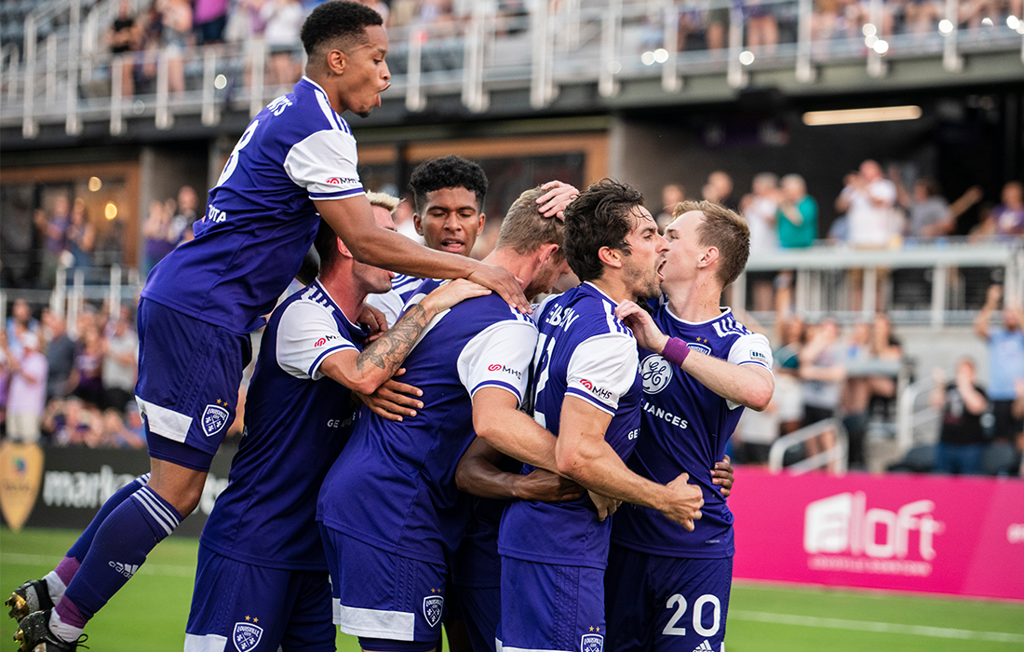 Louisville City FC will continue fighting to punch its postseason ticket Wednesday at Atlanta United 2, aiming both for three points and an important result within the USL Championship’s Central Division.

The boys in purple maintain a 99.9% chance of qualifying for the playoffs, according to FiveThirtyEight.com. Now it’s a matter of when.

With kickoff set for 7:30 p.m. at Fifth Third Bank Stadium, LouCity would need a win and draw or loss by OKC Energy FC later that night to Indy Eleven to clinch a postseason spot. Should the latter scenario not play out, LouCity can win another game on the weekend to solidify its position.

The boys in purple continue to sit atop the Central Division with a 14-5-6 record, good for 48 points, following last Saturday’s draw at Memphis 901 FC. Atlanta United 2 is 7-12-8 and seeing its own playoff hopes evaporate as now just a 2% shot to make it, per FiveThirtyEight.com.

The USL Championship’s postseason, which begins the first weekend of November, will include 16 teams in a single-elimination format. Better seeds host opening-round games, and sides with higher point totals have the right to stay home beyond that.

Here's more of what to watch for on Wednesday...

“Two points dropped (Saturday) makes that extremely frustrating. I’m looking for a good response Wednesday (at Atlanta United 2), and I know that we’ll have it. There’s no doubt about that — but certainly a bad taste in my mouth after tonight.”

Series history: Wednesday will serve as the fourth and final meeting this season between LouCity and Atlanta United 2. Both stops at Lynn Family Stadium resulted in 2-0 victories for the boys in purple. But they’ll be looking to rectify a 1-0 road defeat last time they visited Fifth Third Bank Stadium back on June 6. That remains one of just two games all season in which LouCity has been shut out but sparked a run of games that saw the club lose just one its next 13.

End of the road: Wednesday's matchup with Atlanta United 2 will mark the last of five straight away games to end September for the boys in purple. Following last weekend’s draw at Memphis 901 FC, LouCity remained out of town, heading straight to Atlanta to prepare for their midweek tilt. To follow is a return home for the first time since Sept. 3 when hosting New Mexico United on Sunday in a nationally broadcast ESPN2 game.

Best 11: As playoffs inch closer, Cruz will be tasked with searching for his most potent lineup. And perhaps that process hit a key point in Memphis. For the first time all season, LouCity rolled out the same lineup in consecutive games after this group defeated Indy Eleven by a 2-0 score on Sept. 11: Chris Hubbard, Oscar Jimenez, Sean Totsch, Alexis Souahy, Jonathan Gomez, Paolo DelPiccolo, Jorge Gonzalez, Brian Ownby, Antoine Hoppenot and Cameron Lancaster.

Available again: Cruz will have two more veteran options at his disposal moving forward after midfielder Corben Bone and defender Pat McMahon both returned from injury as substitutes in the Memphis game. Bone, dealing with a groin injury, had been out since Aug. 7. McMahon’s absence dated back to a calf strain forcing him out of an Aug. 28 game. They played 24 minutes apiece Saturday and will “push the group with regard to selection,” Cruz said.

Quick concession: LouCity saw Memphis’ Kyle Murphy slot home a second-minute goal last Saturday, the second-fastest conceded in club history. The fastest was scored by Lucky Mkosana, then playing for Penn FC, on June 16, 2018. LouCity answered minutes later against 901 FC to mark — and, granted, the sample size is small — just the second time it has rallied to earn a point this season. The other instance was in a 1-1 draw Sept. 12 at OKC Energy FC.

Counting on Cam: Scoring goals in brilliant fashion is just what the Englishman does. Lancaster netted his 14th of the season in Memphis, finishing a seventh-minute Jonathan Gomez cross with a headed strike from beyond the 18-yard box. Lancaster, who’s converting once every 91.2 minutes played this season, has tallied 65 career USL Championship goals, fifth-most all time.