Hoppenot stars in another LouCity win at Indy Eleven

There's just something about the feisty forward and Carroll Stadium. 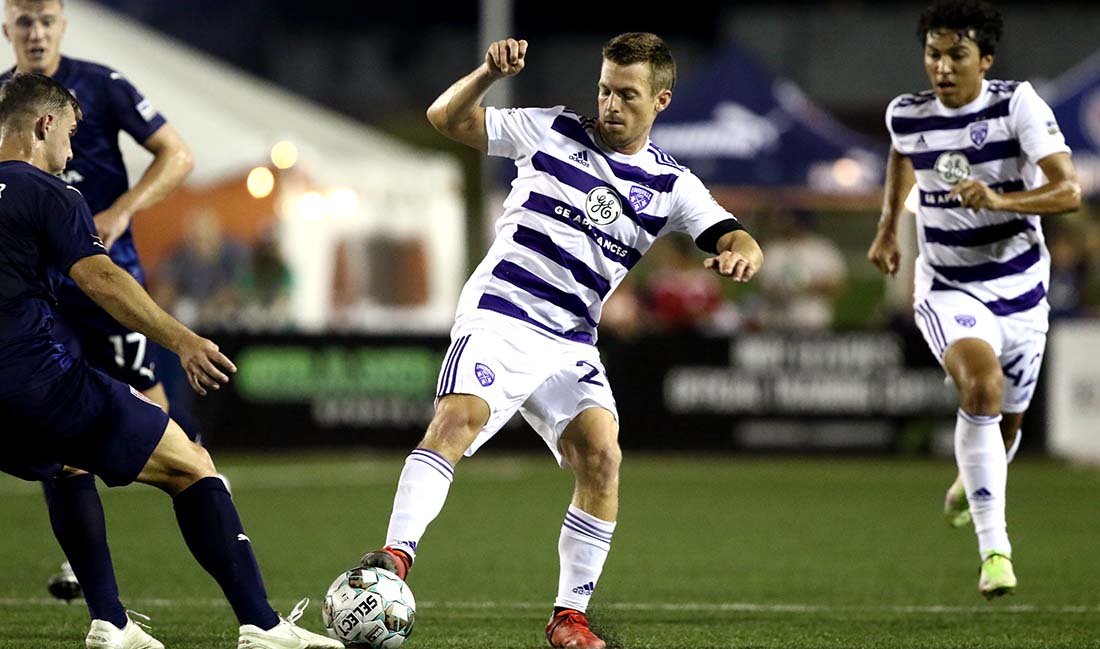 Louisville City FC reestablished its winning ways Saturday in the Louisville Indianapolis Proximity Association Football Contest series, and the boys in purple had a familiar face to thank.

Antoine Hoppenot — the stoppage-time scoring hero of the 2019 Eastern Conference Final — netted a goal and tallied an assist Saturday as LouCity defeated Indy Eleven by a 2-0 score in the clubs’ first meeting since then played back at Carroll Stadium.

LouCity paired the forward Hoppenot’s goal contributions with a solid night defensively, conceding only two shots on target to lock up the side’s sixth clean sheet of the season.

“He gets fired up when he’s here,” coach Danny Cruz said of Hoppenot, with Indy Eleven back at Carroll Stadium this season after Lucas Oil Stadium previously served as its home. “It’s obviously a really good memory that was made here. He’s got some confidence. I thought he was fantastic on both sides of the ball.”

Three points earned kept the boys in purple — now 14-5-5 — atop the Central Division table with nine games to go before the playoffs. Their 47 points are six ahead of second-place Birmingham Legion FC and five off the Tampa Bay Rowdies for the league’s best overall record as of this writing.

Saturday’s result also marked the first LIPAFC victory for LouCity in 2021 following an earlier defeat and draw at Lynn Family Stadium. The rivals close out their four-game LIPAFC series Oct. 16 at Carroll Stadium, where attention is sure to turn back to Hoppenot.

“It’s pretty clear: We don’t like Indy,” Cruz said. “It is what it is, so these games always have a little bit of bite to them — a little bit of fire. But honestly, that group of guys in there, I understand that in the first two games we didn’t get the results we’re looking for, but you constantly see that bite — that fire — every time we play Indy.”

In a game that had lacked quality chances for either side, Hoppenot ran in behind Indy Eleven’s defense and had Jorge Gonzalez play a ball through to his feet. The 30-year-old winger tapped his shot forward before contact with the opposing goalkeeper to open scoring.

On the other side of the halftime whistle, Hoppenot, working on the left flank, whipped in a 69th-minute cross to striker Cameron Lancaster, who guided a header to the back post and in to double the lead.

“It’s a weird field. It’s a tough field to play on. I think it makes it a little complicated on everyone,” Hoppenot said. “It’s a lot of those second moments — second balls — and maybe you hope a deflection to go your way. That’s how I play the game. I got a good deflection today and got a cross in.”

Lancaster’s goal marked his 13th of the year — third-most across the league — and both he and Hoppenot exited immediately after their connection, an apt curtain call.

“We had a moment beforehand when I got to go to get a drink at the bench," Hoppenot said, "and my calves were about to cramp, so I told Danny. He said, ‘All right, give me four minutes.’ Then I got an assist in those four minutes, Cam gets a goal and we both get subbed off.

“It’s pretty nice. It’s kind of funny. It’s the way you want it to happen.”

The Englishman Lancaster’s return to the lineup was one of five changes from Cruz, who also had available defender Oscar Jimenez and Brian Ownby. All three in that key trio have been plagued by injuries at points this year, though Cruz is expecting the roster back to full strength by the postseason.

Saturday’s game marked the third of five away fixtures for LouCity to close out September. The boys in purple travel next weekend for an 8 p.m. ET kickoff at Memphis 901 FC.