Preview: What to watch for with LouCity at Indy Eleven

Still hunting for their first LIPAFC win of the season, the boys in purple return to Carroll Stadium. 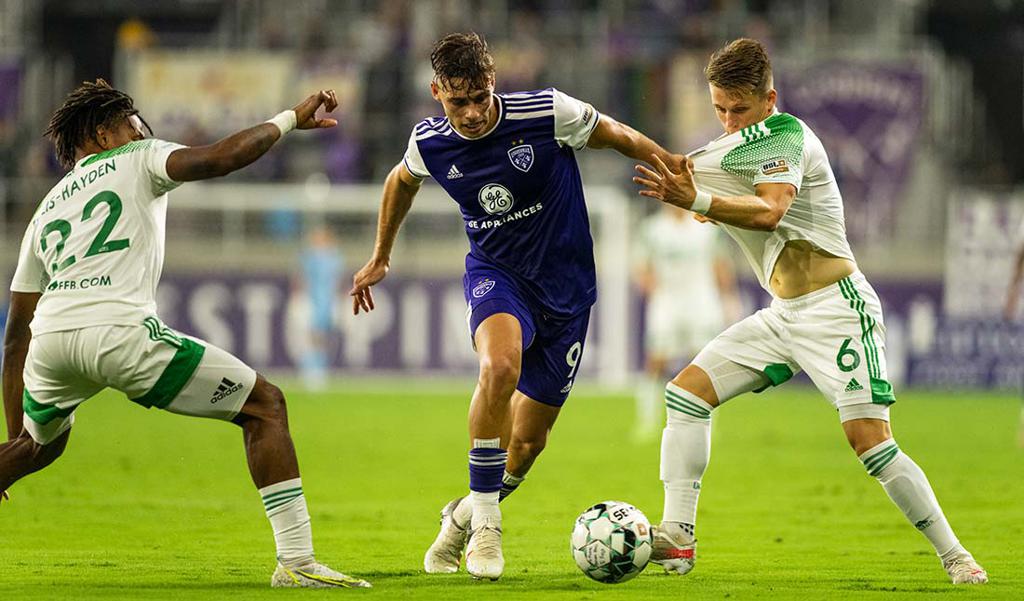 Seeking its first win this season over Indy Eleven, Louisville City FC returns this weekend to Carroll Stadium, a rival’s home field that reminds of some good times for the boys in purple.

The last time they visited, forward Antoine Hoppenot scored an equalizer late into stoppage time of the 2019 Eastern Conference Final and LouCity went on to win, advancing to what was its third straight USL Championship Final.

Indy Eleven had played primarily at Lucas Oil Stadium — home of the Indianapolis Colts — from 2018-2020 before switching back to IUPUI’s Carroll Stadium this season. The club continues to eye its “Eleven Park” plan in the bigger picture, hoping to construct a soccer-specific stadium and adjacent neighborhood development.

Kickoff is set for 7 p.m. Saturday in the third meeting this year between Louisville Indianapolis Proximity Association Football Contest rivals. LouCity dropped points in the first two rounds, falling 2-1 on May 29 and drawing 3-3 on June 26 at Lynn Family Stadium.

Those results, at least temporarily, ended LouCity’s run of LIPAFC dominance. Before Indy’s most recent victory, it had been 1,120 days — dating back to Kentucky Derby weekend in 2018 — since the Eleven won in the series.

The fourth and final clash between the two rivals is set for Oct. 16, also at Carroll Stadium.

Here’s more of what to watch for Saturday…

• On the WBKI-TV (The CW)/ESPN+ streaming call: Josh Eastern (play by play) and Gary Bailey (color).

Away days: Two down, three to go. This weekend’s trip to Indianapolis marks LouCity’s third of five straight road trips to close out September. Already, the boys in purple have won at Hartford Athletic and drawn OKC Energy FC. Left to go are also visits to Memphis 901 FC and Atlanta United 2 before the club finally returns home to host New Mexico United on Oct. 3.

PdP attacks: LouCity team captain Paolo DelPiccolo scored a career-high fifth goal of the season Sunday in a 1-1 outing, continuing to show his effectiveness in a newer role. The University of Louisville product played mainly as a central midfielder for LouCity until last season, when he took on a more advanced role. DelPiccolo tried a game-high five shots in OKC and won all his aerial duels.

Comeback club: Sunday’s result marked the first time all season in which LouCity conceded a game’s first goal and didn’t lose. DelPiccolo scored deep into first half stoppage time to end a bothersome trend for LouCity, which allowed an early goal but was otherwise solid defensively, seeing Energy FC try only four shots on the evening.

Productive position: Whether it’s been longtime LouCity forward Cameron Lancaster or the recent addition Kyle Greig playing up top, the role has contributed. Lancaster scored the opening goal of a 4-2 win at Hartford last week, while Greig slotted in the lineup to assist DelPiccolo’s goal against OKC. Lancaster is expected to be back available again Saturday.

Davis isn’t done: Among the six lineup changes between the Hartford and OKC games was inclusion of veteran forward George Davis IV making his first start of 2021. Davis IV, who featured as a right wing back in a 3-5-2 shape, completed 63.6% of his passes while making one tackle and winning one foul.

Between the posts: A familiar face also returned at goalkeeper as Chris Hubbard — LouCity’s top choice to open the season — took the starting job back for the first time since July. Hubbard has been in a battle with Parker Siegfried, who left the Hartford game with what coach Danny Cruz termed a “dead leg.”

Youth served: LouCity’s roster includes 18 players over age 25, but the back line has been an exception on an otherwise older squad. Sunday’s lineup at OKC featured 16-year-old Josh Wynder and 18-year-old Jonathan Gomez. The duo completed 77.5% of passes — Gomez is known to get in attacking spots — while creating three chances and winning a trio of fouls.