The boys in purple held the hosts to just four shots Sunday. 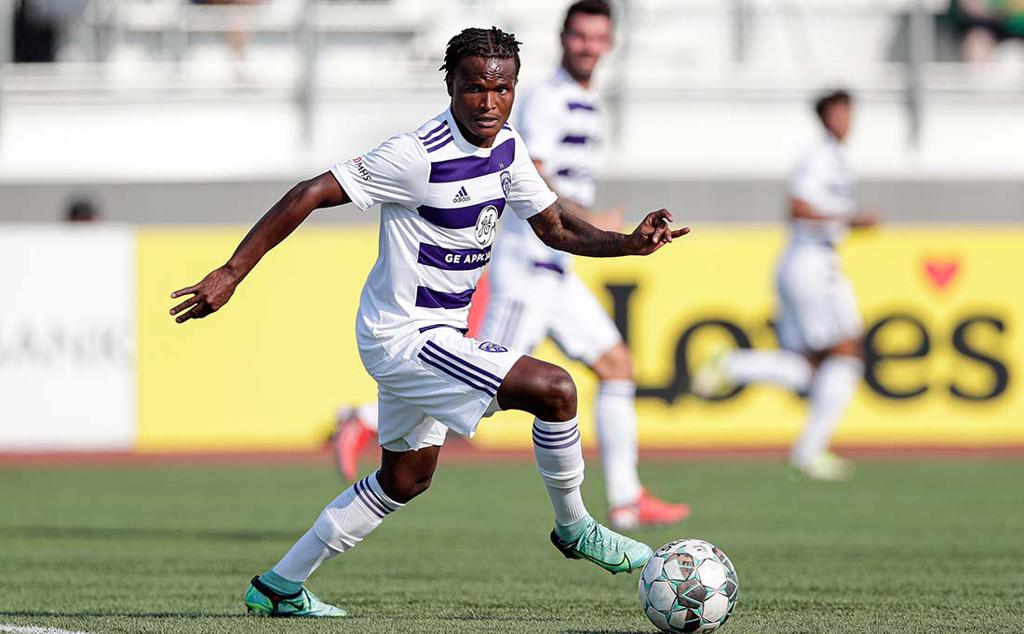 Louisville City FC on Sunday played OKC Energy FC to a 1-1 away draw that will leave the boys in purple wishing they’d taken away more.

Paolo DelPiccolo equalized in first half stoppage time, but LouCity couldn’t capitalize on myriad other chances. OKC had earlier led a counter to score on one of its two shots on target all game.

The result improved LouCity to 13-5-5 on the season, moving the club four points clear of Birmingham Legion FC atop the USL Championship’s Central Division standings.

“It’s obviously frustrating to only get a point,” said coach Danny Cruz whose side tried 15 shots. “But I was proud of the effort from the group — the mentality. We limited them to four shots, collectively, with our press, and we obviously changed our shape tonight with the field and what we knew we would see here.

“I thought we created enough chances to win the game.”

LouCity’s offensive barrage included a controversial 11th-minute moment when forward Kyle Greig’s shot from just outside the box caromed off an OKC defender’s arm in the box. Appeals for a penalty weren’t successful.

Energy FC goalkeeper C.J. Cochran made three saves, including a key denial in the 70th minute when a turnover near the goal led to another dangerous look for Greig.

“When you look at the performance (Greig) had and the shift he puts in, it’s certainly contagious,” Cruz said. “He is somebody who’s honest — who’s going to do the work and obviously wants to score goals. But more importantly, he tries to put in a complete game on both sides of the ball. I felt he was really important for us tonight.”

The goals were well struck, as in the 25th minute OKC’s Villyan Bijev rifled in a deflected shot that landed conveniently to Zach Ellis-Hayden at the back post. LouCity leveled just before the halftime whistle when a lengthy possession finished with Niall McCabe crossing to Greig, whose header fell to DelPiccolo at the face of goal.

DelPiccolo — the midfielder and team captain playing higher up the field this season — made it his career-high fifth goal of the campaign.

“I’m obviously playing in a more advanced position and trying to find space in the box,” DelPiccolo said. “That’s a huge individual thing I need to improve, because in my opinion five is not nearly enough or where it needs to be. I need to clean that way up and be able to do a lot more tactics-wise.”

Central Division rivals see each other four times apiece in 2021, and this marked the last meeting between LouCity and OKC Energy FC. The boys in purple went an unbeaten 2-0-2, prevailing in both games at Lynn Family Stadium.

That, however, is a friendly fortress LouCity won’t see until October. Next is a trip to play at Indy Eleven at 7 p.m. Saturday before jaunts to Memphis 901 FC on Sept. 25 and Atlanta United 2 on Sept. 29.

Cruz has accordingly rotated his lineup and continued to get results. Three of four goal scorers from last Tuesday’s victory at Hartford Athletic FC were out of the 11 Sunday as LouCity looks to remain fresh in pursuit of its goal to finish the season with the USL Championship’s best record.

“To be where we are with this group — the injuries that we’ve had — I feel constantly proud of the group I get to be with,” Cruz said. “We’ll continue to push forward. Everybody in that locker room knows the expectation, and from here, we continue to progress the remainder of the season and push for a championship.”

With the OKC draw, the boys in purple sit on 44 points, five behind a fellow Eastern Conference side, the Tampa Bay Rowdies.