The boys in purple dominated but couldn't find the back of the net Friday. 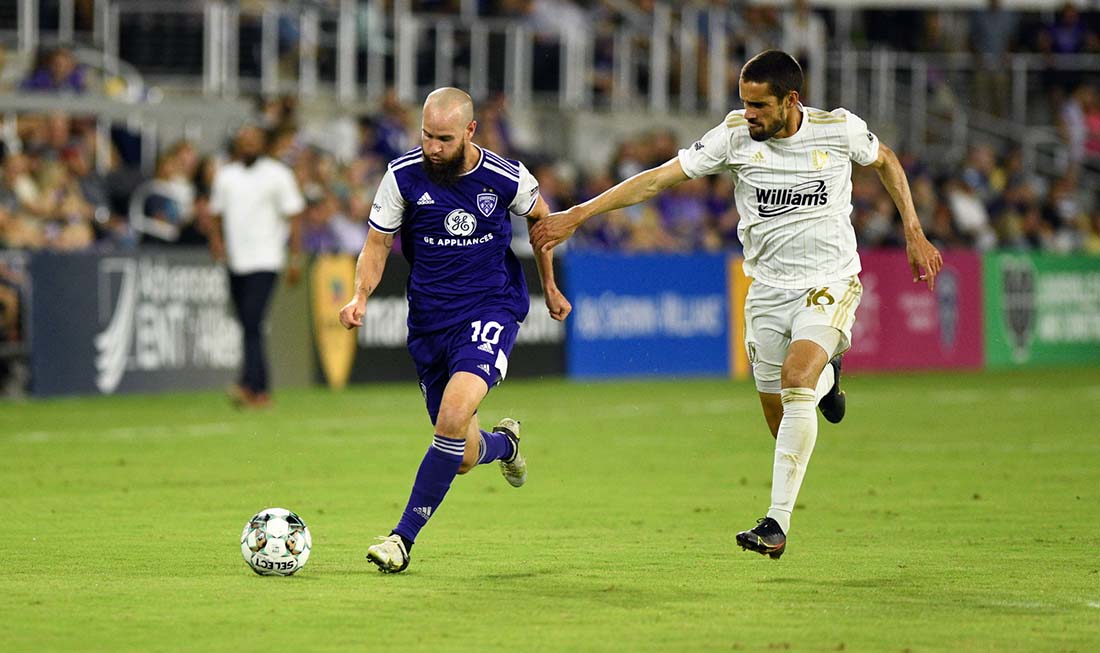 Louisville City FC put forth a vintage Lynn Stadium performance Friday night complete with dominant possession and plenty of chances for the boys in purple.

One thing, however, was missing — a home goal — and LouCity as a result suffered a rare setback on its own turf, falling 1-0 to FC Tulsa in front of 10,206 fans.

“Frustrating game and obviously unhappy with the loss” is how coach Danny Cruz characterized it.

“I felt bad for the fans,” Cruz added, “and I felt that it was an unbelievable atmosphere yet again. I thought we created some good opportunities but clearly the last few games we need to be better in the final third, and that starts with me.”

The boys in purple controlled 65.9% of the ball, out-shot Tulsa 19-5 and took 13 of those attempts from inside the opposing side’s box. They couldn’t offset a 20th-minute goal by FC Tulsa when a Dario Suárez shot from distance — perhaps shielded by a pair of LouCity defenders — slipped its way in for the go-ahead goal.

LouCity lost for the second time in as many weeks to one of its closest USL Championship Central Division rivals. Last Saturday, it was a 2-1 defeat at Birmingham Legion FC, second on the table. FC Tulsa sits third.

The boys in purple continue to lead their group, but it’s a more tenuous advantage with their record now 12-5-4, good for 40 points, one better than Birmingham.

And it all could have gone the other way had one of many LouCity opportunities hit the back of the net.

The best looks came in the second half, when pressure ramped up in the 60th minute. Between a pair of home corners, Niall McCabe crossed from the right wing to Paolo DelPiccolo, whose header had to be tapped over the bar by the opposing goalkeeper.

In the 63rd minute, another DelPiccolo header — this one not covered by the FC Tulsa defense — flew haplessly wide of the post. There were appeals for a penalty when Kyle Greig went down in the box in the 70th minute, and into stoppage time Antoine Hoppenot forced a save on a rifled shot before a would-be open rebound shot just missed Brian Ownby’s outstretched leg.

FC Tulsa’s Sean Lewis saved all four tries on target he faced while his counterpart in purple, Parker Siegfried, had little to do after the visitors’ goal.

“It wasn’t good enough overall and really disappointing because I thought that we had control of the game the whole time,” said midfielder Niall McCabe. “It’s just incredibly frustrating because we had chances to win it and to limit them to two shots on goal. One goal is enough to win it if we don’t do our job at the other end, so really frustrating.”

The defeat continued a season-long trend: LouCity has yet to win a game it didn’t score in first. Additionally, this marked just the third time all season the club has trailed at Lynn Family Stadium and the first since a 3-3 draw June 26 to the Indy Eleven.

It’s a short turnaround to Tuesday’s matchup with Hartford Athletic. Coverage from Connecticut will air live at 7 p.m. to a national ESPN2 audience.

“Quick turnaround on Tuesday, and that’s sort of what you want in these circumstances to just get back to work,” McCabe said. “We know the quality that we have in that room. It’s a disappointing result, but we bounce back time and time again. That’s why I think we are one of the best teams in the league is because we have that mental toughness, that fortitude, and that quality.

“I think that it’s just a little blip, and I’m not worried when I look around to the left and right of me.”

20’- Darío Suárez right footed shot from outside the box to the bottom left corner. Assisted by Matt Sheldon.