McLaughlin opens LouCity account with a bang in win over Atlanta 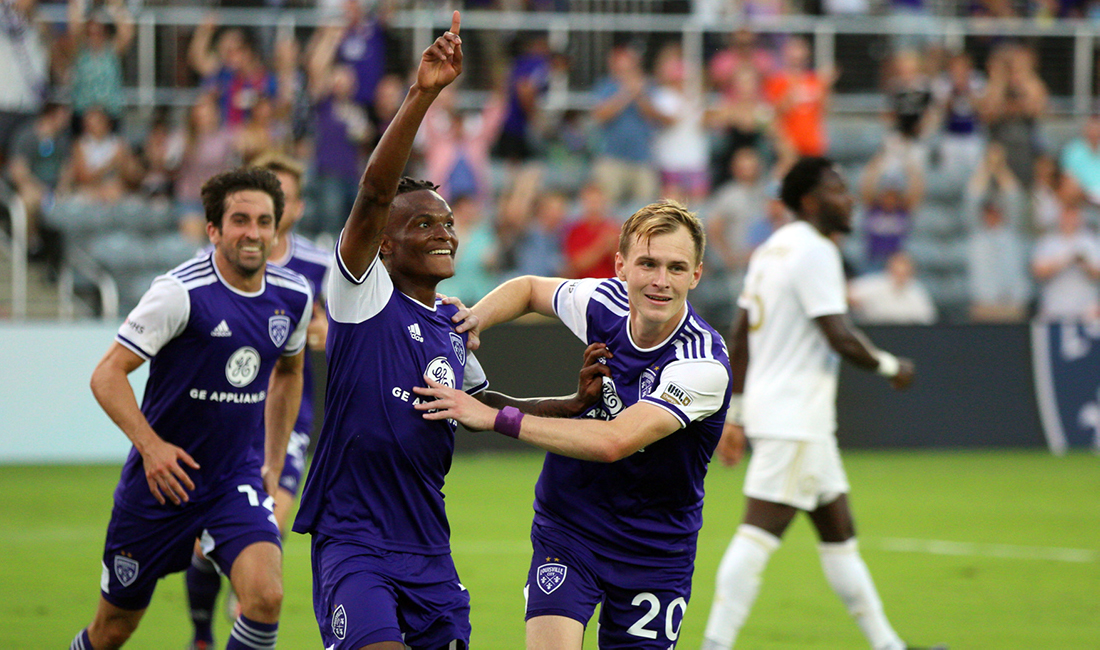 Forward Jimmy McLaughlin took an extra touch moving to his right before launching — in fadeaway fashion — the 63rd-minute goal of the season so far for Louisville City FC in a 2-0 victory over Atlanta United 2.

McLaughlin’s rocket of a try bounced off the cross bar and in to mark his first goal in purple, a ceremonious event for the former club rival who signed this offseason from FC Cincinnati.

"It was unbelievable," McLaughlin said. "I’ve been dreaming about scoring in this fantastic stadium in front of these amazing fans, and it’s been a long journey for me over the last two years to get back to this level. To be able to score a goal in a wonderful moment like this in front of so many fans and my girlfriend was fantastic."

The win boosted LouCity’s lead in the USL Championship’s Central Division to four points as the club improved to 8-3-2. Going back to June 12 — when Lynn Family Stadium upped to 100% capacity crowds — the boys in purple are unbeaten in seven of their last eight games.

Saturday’s result came on a milestone evening for the youngest player on the roster, with 16-year-old defender Josh Wynder logging 57 minutes in his first professional start. That was one of four lineup changes from Wednesday on an evening stalwarts such as Corben Bone, Jonathan Gomez and Brian Ownby rested in the club’s third game in eight days.

"I felt the guys that came in did an excellent job," said head coach Danny Cruz. "It’s a luxury as a coach when you feel confident, as I've said over and over again, to play anybody in that locker room. I felt the mentality of the group, especially coming out of the second half, was fantastic.

"All in all, we talked a ton today about how we keep climbing. We don’t stop. Ultimately, when you put in an effort like that as a group, you put yourself in a position to take three points.”

Amid its schedule congestion LouCity didn’t show signs of fatigue, out-shooting, out-passing and out-possessing Atlanta over 90 minutes. United 2 didn’t so much as get a shot on target.

The University of Kentucky product Matsoso helped the home side on the board in the 54th minute, finishing smoothly off a one-touch pass from the right side of the box. McLaughlin’s heroics followed in the 63rd minute, and that was all the home side needed as it nears the midpoint of the USL Championship’s 32-game season.

McLaughlin said from here it's up to LouCity to "keep building."

"We’re at the top of the group right now, but it doesn’t stop," he added. "This club has a history of success and a culture of continuing to push and be the best team we can. But I’m going to continue to fight every single day in practice, continue to improve and continue to get wins for this team."

It’s a little less than a week before the boys in purple are back in action in a cross-conference matchup against Colorado Springs Switchbacks SC at a sparkling new downtown venue, Weidner Field.

Man of the Match: Jimmy McLaughlin