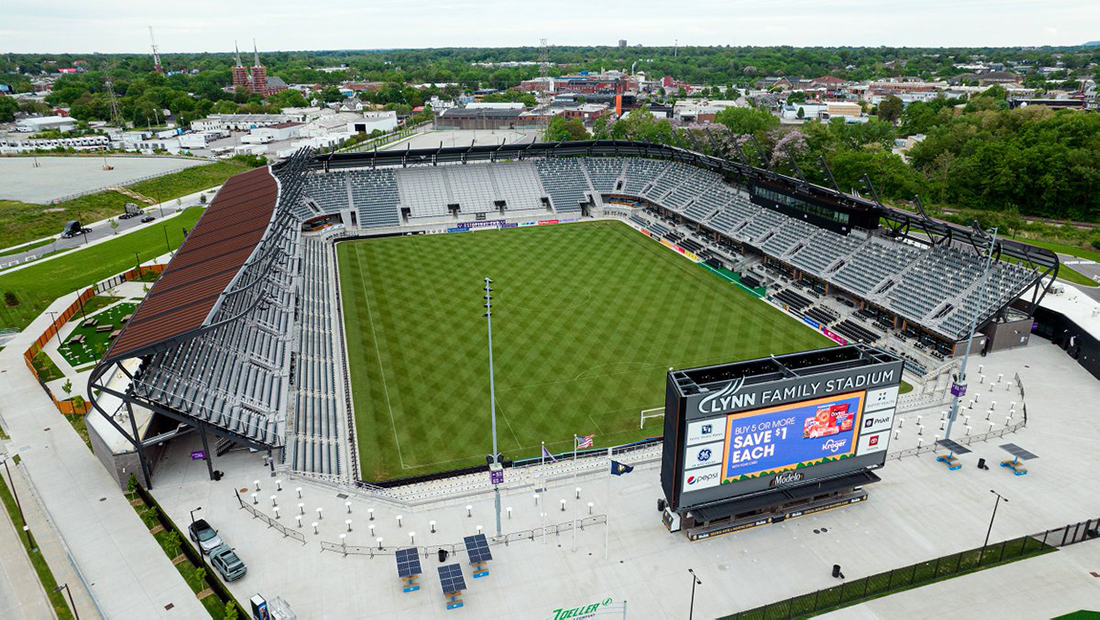 A moment years in the making — Lynn Family Stadium’s Grand Opening game — is now less than a month away.

The date is officially set for June 12, coinciding with a lift on capacity restrictions ahead of Louisville City FC’s 7:30 p.m. home match against Memphis 901 FC. Tickets go on sale at 11 a.m. Wednesday at LouCity.com/tickets or by calling (502) LOU-CITY during regular business hours.

“We view the grand opening of Lynn Family Stadium as a celebration of our city,” said club president Brad Estes. “When private business and local government work together, combined with the support of an entire community, a junkyard can be turned into a crown jewel of professional sports.

“Whether you’re an owner, a player or staff member, a supporter, a sponsor, involved in metro government or simply a member of the community – Lynn Family Stadium is your achievement. So come celebrate with us on June 12 and beyond.”

Opened in 2020 amid the COVID-19 pandemic, Lynn Family Stadium last year hosted crowds at about 30% of its 15,304 capacity. This season, the number has upped to 50%. The Butchertown neighborhood venue’s first 75% capacity audience is expected Saturday for rival Indy Eleven’s visit.

Along with the Grand Opening game — the first at 100% capacity, and to be presented by Messer-Harmon — single-game tickets and 5-match packs will be on sale for the remainder of the season. The boys in purple are off to an unbeaten start, continuing a winning tradition established with two USL Championship titles and six consecutive Eastern Conference Final appearances since the club launched in 2015.

Thanks to official ticketing partner SeatGeek, fans can also search the resale market in the event of sellouts, meaning tickets are always available online at LouCity.com/tickets.

The venue includes a number of fan-friendly features. There’s a state-of-the-art video board — second largest in Kentucky behind Churchill Downs’ massive screen — ideal seating close to the pitch, myriad food and drink options, solar-powered charging stations, a beer garden and a 72-foot bar at the facility’s open end believed to be the longest in the state.

At 100% capacity, the safe-standing supporter zones at either end of the pitch will make for a wall of support expected to provide LouCity and Racing a true home advantage.