His gig as team administrator hasn't changed the forward's approach on the field. 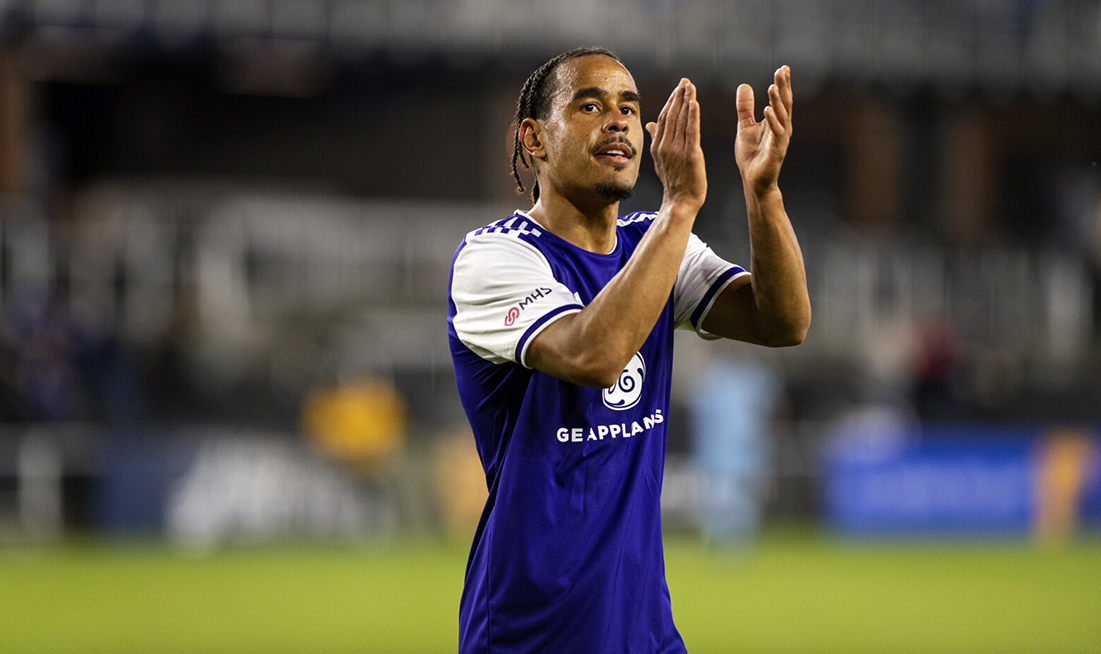 By subbing on Saturday night for Louisville City FC, George Davis IV became one of what will be a select few players this year to appear in a USL Championship game for an 11th consecutive season since the league launched.

That longevity is a testament to Davis IV’s talent but also landed the 33-year-old in a dual role as team administrator beginning to take a look into running a soccer club, too. The forward continues to train and play for the boys in purple while holding a key role in making the 2021 team tick on a day-to-day basis.

How’s he balancing those duties? Pretty well, if Saturday’s time on the pitch is any indication. Three minutes after coming on, Davis IV crossed to midfielder Paolo DelPiccolo for a point-blank goal in a 2-0 victory over Atlanta United 2 at Lynn Family Stadium.

“It’s incredible what he’s doing. It really is,” said DelPiccolo, also LouCity’s captain. “But people sometimes forget that he’s a three-time champion and this guy is a baller. He is far from the end of that, so he comes out and grabs an assist and we see it every day in training. He’s a good footballer, so it doesn’t surprise anybody. We are happy for him but not surprised at all.”

“I probably can’t add anything to it except for that I am really proud of both of them,” Hackworth added. “To be veterans of this club and veterans of this league and pros for as long as they have — then to be really influential in a result — is fantastic.”

Davis IV played previously in the USL for the Dayton Dutch Lions, Los Angeles Blues, on loan with Orlando City and the Richmond Kickers. He joined LouCity in 2016 and on Saturday marked his 129th USL Championship appearance for the club, second on the list behind Niall McCabe.

Davis IV’s 234 regular season USL appearances are the most all time.

“I am really fortunate to have been blessed with health and the opportunity to continue to play,” Davis IV said. “So, it’s been a long time and I’ve seen a lot of growth in the league and its awesome to be in a facility like we were in tonight and play for this group and this club. I’m glad to be a part of it all.”

Davis IV replaced striker Cameron Lancaster in what was, at the time, a 1-0 game in LouCity’s season opener.

"Really it’s about taking care of the ball, and then if you get an opportunity, take it,” he said.

Jonathan Gomez — a defender some 16 years Davis IV’s junior — played his veteran teammate in behind on the left side of Atlanta United 2’s defense. Davis IV dribbled, head up, until he caught a glimpse of DelPiccolo at the far post.

It was just a matter of DelPiccolo tapping in from there to double the lead.

“I still have a strong mentality,” Davis IV said. “I go out, and that’s what I love to do is play, so I still give it my all when I have the opportunity to put my boots on. But obviously before and after, it’s a little bit different for me.

“The club has put a lot of trust in me to start to take care of some operations and work on the technical staff and work with the front office a little closer, so it’s a role of adapting and learning and I’m just trying to do it to the best I can.”

Davis IV’s best has set a league standard for more than a decade. It still holds true in 2021.