The defender was all but done with soccer before invited to join the club. 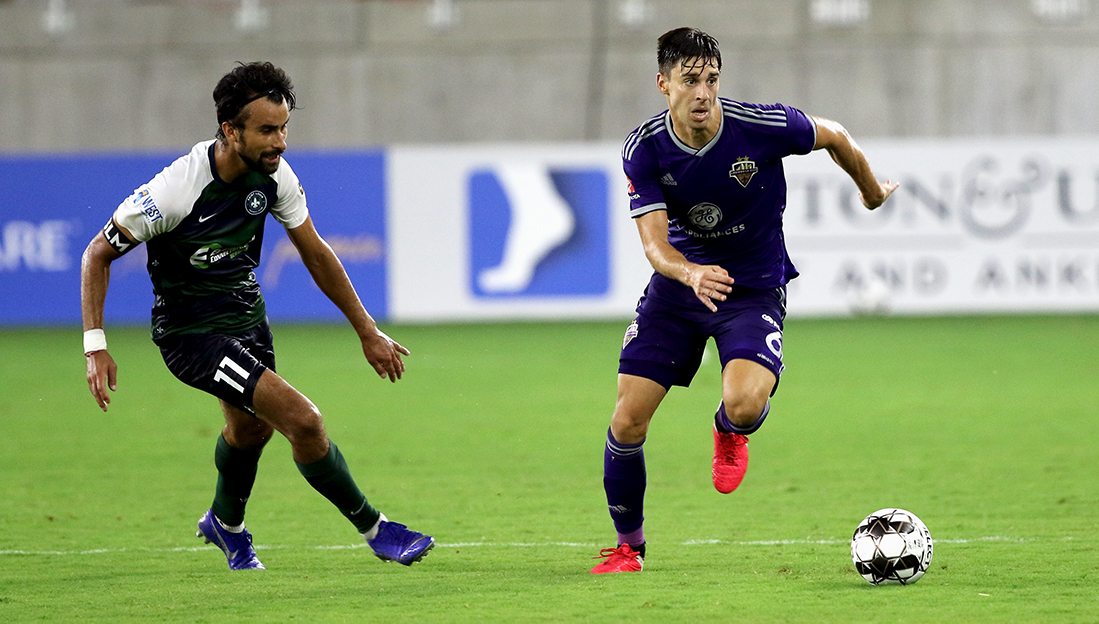 At about this time last year, Wes Charpie found himself flummoxed.

The defender had appeared in 28 games and ranked fifth in minutes logged for his former club, the USL Championship’s Memphis 901 FC, yet wound up out of contract with the 2020 season quickly approaching.

“I was thinking about how I love the game, but options weren’t coming through for whatever reason,” Charpie said. “You grind and put so much into it. At Memphis I showed well and played almost every game. It was like, ‘Damn, how could I not be getting any looks right now?’

“I got smacked with reality and had to think, ‘OK, what am I going to do with my life?’ I had to get something going.”

Charpie went to work in marketing for his father’s business, an MRI diagnostics center, shopping products to doctors and chiropractic offices.

Mentally, he moved on from soccer to pondering career prospects with his communications degree. Physically, he stayed in top shape — just in case.

Then came a message years in the making from John Hackworth, Louisville City FC’s head coach and sporting director.

A fellow Florida native, Hackworth grew up playing for some of the same youth programs as Charpie, previously coached Charpie’s alma mater, the University of South Florida, and saw the 6-footer line up against the boys in purple with Memphis.

“He started one game against us at right back and one at left back,” Hackworth said. “I always had this idea that he could be a center back, so on a whim I called him. I asked him to take a leap of faith with us.”

“It was a tough moment, actually, because I was ready to get my other life going,” Charpie remembers. “But Louisville City is such a fantastic organization. If it was another team, I might have passed on it.”

Charpie joined the club for its preseason trip to Utah, earned a contract and went on to make 11 appearances in purple throughout a season shortened due to the COVID-19 pandemic.

Charpie proved himself as a fit in a tough team to crack. LouCity assembled the USL Eastern Conference’s best overall record and made its sixth straight appearance in the conference final on the back of a strong defense.

Ben Lundt was named the USL Championship’s Goalkeeper of the Year having posted a league-leading nine clean sheets. LouCity conceded only 14 goals, third-fewest of 35 clubs, as Charpie rotated in for regular starters Sean Totsch, an All-League First Team selection, and Alexis Souahy.

“I can look back and say it was a good year,” Charpie said. “Coming into a team like this, the standards are super high. I was playing at a new position, and I pretty quickly molded into it. I did well, but more importantly, the team did well.

“There’s a patch where I wasn’t playing in as many games, but the fact that I can be a good teammate when we’re not winning is important to me. It’s important to be a part of this culture Louisville has.”

Charpie is preparing for his seventh professional season having played for Toronto FC II (2015-2016) and Saint Louis FC (2017) in the USL as well as the Jacksonville Armada (2018) of the defunct North American Soccer League.

He holds a high-pressure role, often serving as the last line between an opposing attacker on the ball and an open opportunity at goal. Not so coincidentally, Charpie picked up surfing while in Jacksonville — “nothing clears the mind like being out in the ocean” — and enjoys backpacking through lengthy hikes as another stress reliever.

Having briefly seen the other side of “real work” life, Charpie’s also especially grateful to be back in a locker room environment.

“He’s made the most of every chance,” Hackworth said. “We rewarded him by bringing him back and gave him a much better contract than he had last year.”

Going into 2021, Charpie, who’s plenty confident in his skills on the ball, is aiming to better his communication with teammates in LouCity’s complex schemes. Keys include organizing the back line early by anticipating attacks.

“It’s such an honor to play for a club like this,” Charpie said, “and I think everyone in the league looks at it as if they get an opportunity to be here, they’re going to jump on it.”

“Hack resurrected my career, in a sense. I fell back in love with the game just coming to work here every day. I get a kick out of talking to the guys, learning with them and giving everything I can to this team.”