LouCity serves as Gomez’s ‘shop window’ to the world

The young outside back trialed during the offseason for first division sides in Europe. 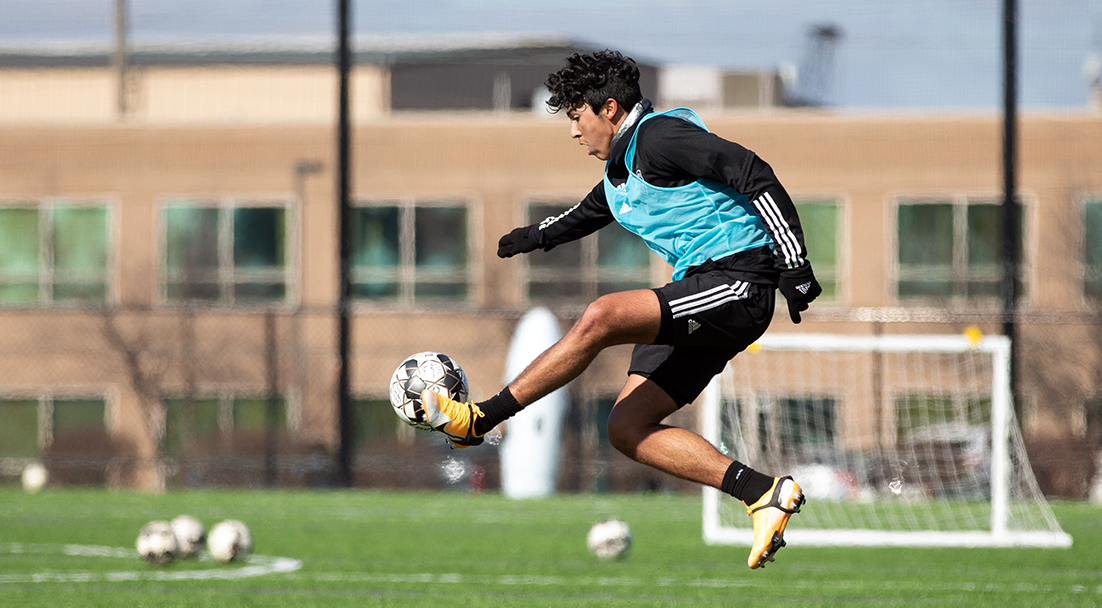 There is a quirky truth when it comes to Jonathan Gomez’s future with Louisville City FC.

In this special situation, a best-case scenario exists for both player and club that sees Gomez signing elsewhere next year,.

Gomez will on Sept. 1 celebrate his all-important 18th birthday — the age to acquire the proper work visa to play in Europe — as the 2021 USL Championship campaign winds down. And to prepare for it, the defender spent this most recent offseason on trial with a trio of first division sides.

Should one of them come calling, it could mean a historic moment in which LouCity both springboards a young talent to the sport’s highest level and receives a transfer fee in exchange.

“The reason he’s chosen to be here is, first, he thinks this is the best place for him to develop as a player,” said LouCity Head Coach and Sporting Director John Hackworth, “but also that we’re willing to allow him to go on these trials. That was part of the agreement before we signed him.

“It puts him in a shop window. If he does the job we think he’ll do, he’s going to continue getting interest from foreign clubs.”

The Texas native Gomez was already a high-profile U.S. youth international before making the decision to turn professional at age 16 and, last March, agree to a contract with LouCity. He totaled 10 appearances during an abbreviated 2020 campaign at either outside back position, but mostly on the right side.

The showings landed Gomez offseason opportunities to trial at first division side FC Midtjylland in Denmark, plus top-level clubs Sporting CP and FC Porto in Portugal. Gomez’s older brother, Johan, is under contract with the latter.

“That’s always been a goal of mine — to go and play overseas,” Gomez said. “I’ve seen others do it. My brother’s over there. I think I can be the next one. We have a lot of Americans playing in Europe, opening doors for the younger generation to go show themselves.”

Whether it’s Christian Pulisic with Chelsea F.C., Weston McKennie at Juventus, Tyler Adams at RB Leipzig or a host of other young U.S. internationals playing abroad, it seems this generation of players is almost weekly improving what’s been a modest resume for Americans in Europe.

Gomez, who has been capped with the U.S. U-17s, has surrounded himself with coaches he believes can raise his game. Hackworth is the former U.S. U-17 head coach and senior national team assistant, while LouCity assistant Danny Cruz played in the Major League Soccer ranks.

“It comes down to the people involved,” Hackworth said. “His agent, Danny and I struck up the relationship. We understood what the parameters were going to be. And then we built on it, so there’s trust there. With different choices out there, a player like Jonathan has to go with people and clubs that fit what he’s looking for in his personal growth.”

Gomez mainly worked into clubs’ U23 sides while recently overseas. In Portugal, he noticed a high soccer IQ of those around him, but the talent level reminded him of the USL Championship. Likewise, it was like playing at home in Denmark going against older, physical players as he does in America’s second division

Gomez says there’s plenty to improve with his game, namely in becoming more of an offensive threat from a defensive position. He enters 2021 with an eye toward better crossing accuracy and a more cunning approach to attacking in one-on-one situations.

“The COVID break we had last year helped me a lot,” Gomez said. “There was a second preseason, and I could improve on my game by watching video with Hack and Danny.”

As a result, Gomez saw the field more than his coaches might have expected considering he was 16 for most of the season. "JoGo," as friends and family often call him, totaled 403 minutes.

“With any young player, there’s always ups and downs,” Hackworth said. “I think he experienced some of those. The good news is, he always responded in a very positive manner. During this offseason, we know by him going on these trials in Europe he’s gathering more experience while at the same time coming in super motivated to make that next step in his career.”