The striker will be in Louisville over the longterm after a standout 2020 season. 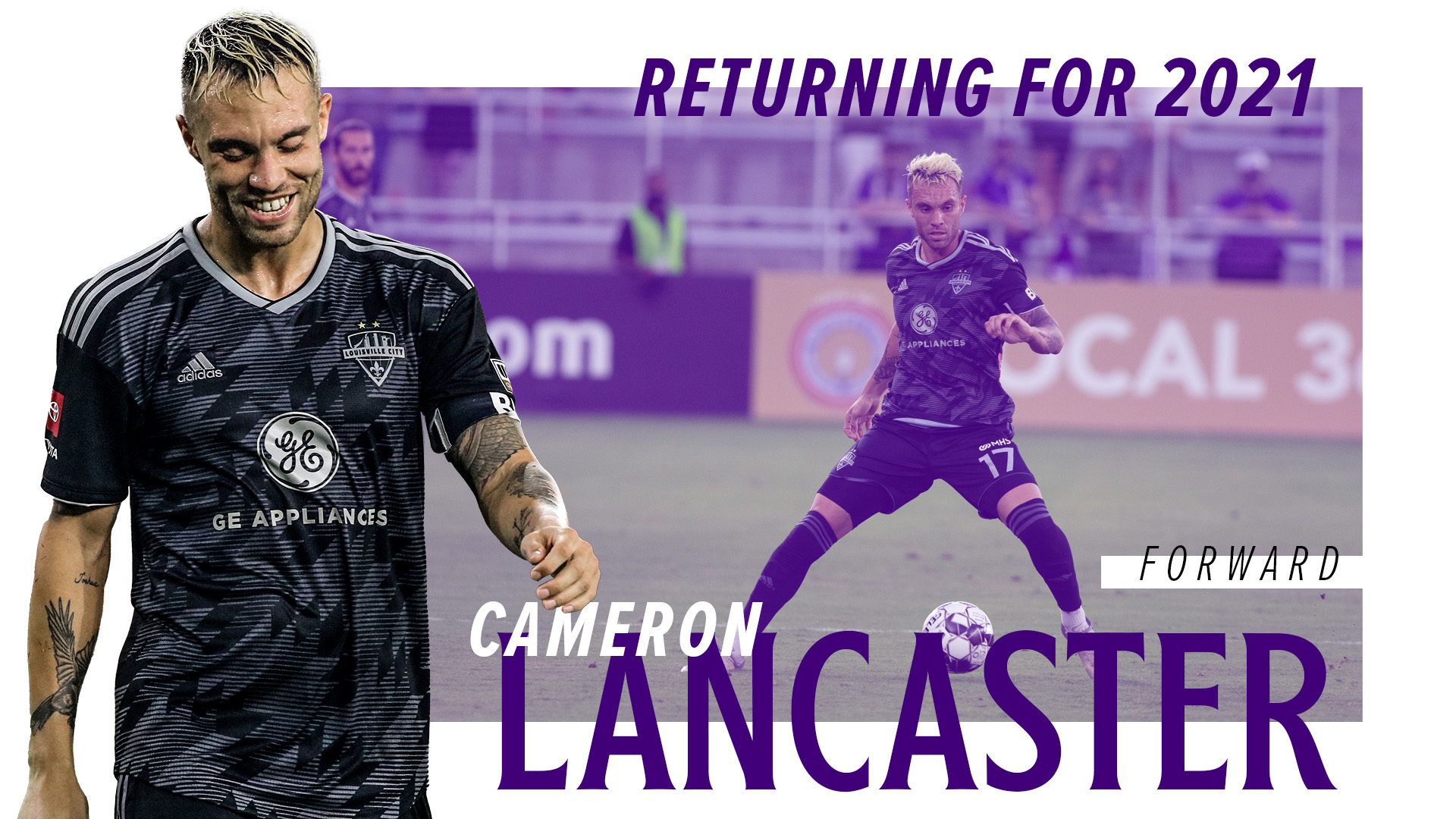 Cameron Lancaster, Louisville City FC’s leading scorer last season while in town on loan, has agreed to a new multiyear contract with the club that will keep the prolific striker in purple, it was announced Thursday.

The deal, which is pending league and federation approval, returns to LouCity a forward who in 2020 surpassed 50 career USL Championship goals, claimed a First Team All-League spot and earned Most Valuable Player consideration as one of three finalists for the award.

“Securing Cam to a long-term contract is a huge step for our club,” said LouCity coach and sporting director John Hackworth. “Furthermore, it is an important moment for the USL when a player of his quality chooses to stay in the league at the prime of his career.

“Cam is one of the best goal scorers that I have ever coached. He also understands the expectations of every player who represents this club. We look forward to his contributions to Louisville City FC’s success for years to come.”

Lancaster netted 12 goals last season in a variety of ways, sinking everything from a free kick at distance to a crafty back-heeled tap. His seven goals poured in over just as many games down the stretch of the season also sparked LouCity’s run to the Eastern Conference Final.

A member of club’s original roster in 2015, the Englishman earned a Major League Soccer contract with Nashville SC after a 2018 campaign in which he scored a USL-record 26 goals and won the league’s Golden Boot. Nashville sent Lancaster back to Louisville on a season-long loan this year, when he hit the half-century mark in scoring.

“I’m delighted to sign for Louisville City FC,” Lancaster said. “I love this club, the fans and the direction the ownership is taking it. I’m grateful for the opportunity to repay the trust and belief shown in me in the coming years. The hard work begins now. Since 2015, I’ve seen this club grow in so many ways. The sky is the limit, and I can’t wait to contribute to that.

“I’m really looking forward to next season and playing in the best stadium and in front of the best fans in the league. See you then.”

Lancaster’s rush to 50 goals positioned him as arguably the USL’s most efficient scorer ever. He did it having hit the back of the net once every 114.8 minutes played. Next closest among those with 50 goals is Dane Kelly at 153.3 minutes per goal.

Such success was gradual in Louisville -- Lancaster rehabbed from an injury during the club’s debut season -- but certainly not surprising. He came up through the Tottenham Hotspur Academy, earning a professional contract and, eventually, an English Premier League appearance during the 2012 season.

Since then, Lancaster has assembled an unparalleled USL resume that also includes the game-winning goal in the 2017 league final that won LouCity its first championship.

“In bringing Cam back, we get a proven goal scorer who has the ability to change the game at any moment,” said LouCity assistant coach and technical director Danny Cruz. “He continued to show this year that he belongs in a Louisville City FC jersey, and we are happy that he has chosen to stay. It is a testament to this club, the players, the staff and our ownership group that we are able to secure this type of talent for years to come.”

Lancaster’s name adds to a strong prospective roster for the 2021 season as the club reloads following a sixth straight trip to the Eastern Conference Final. Negotiations are continuing with players out of contract, and more returners are expected to be named in the coming weeks.