The FC Cincinnati loanee ranked highly in clean sheets and save percentage. 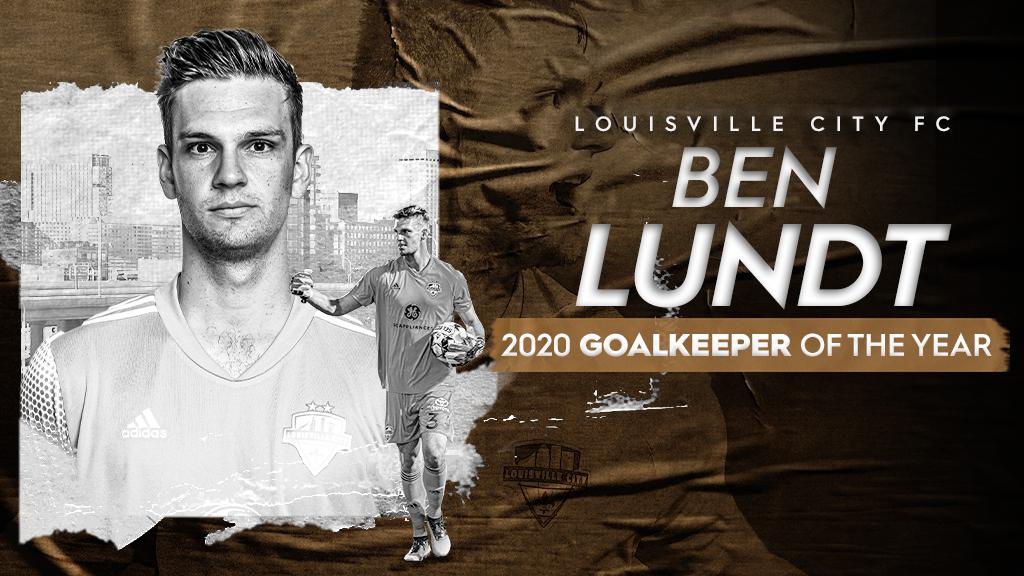 Louisville City FC’s Ben Lundt didn’t make the most saves in the USL Championship’s 2020 regular season or record the most shutouts.

But when his side needed him most, Lundt came up with the key saves that earned LouCity the best record in the Eastern Conference and the second-year pro the honor of being named the league's 2020 Goalkeeper of the Year.

“We are so proud of Ben and his growth as a player and person while here at LouCity,” coach John Hackworth said of Lundt, who’s on loan from Major League Soccer’s FC Cincinnati. “He has matured both on and off the field. The work that goalkeepers coach Scott Budnick has done is impressive, while Ben’s peers, Chris Hubbard and Mu Ugarak, have pushed Ben all season. This individual recognition for Ben is fantastic, but it is a reflection of the collective work of our team.”

Appearing in all-but-one of Louisville’s regular season contests, the 25-year-old was a model of consistency throughout the season. His 74.4 save percentage was the second-highest in the Championship among goalkeepers who appeared in at least 14 games, while his 0.73 goals-against average and seven shutouts also placed him among the league leaders in both categories.

But it was Lundt’s ability to produce the big save at key moments that saw the German shot-stopper stand out in a crowded field that produced a narrow margin of victory over other worthy contenders. He began the year in superb fashion with a highlight-reel save against North Carolina FC that led to a 1-0 victory. He ended the year in similar fashion against Saint Louis FC, again producing a key stop on the road in a 1-0 win in LouCity’s penultimate game of the season.

Lundt earned 36.8 percent of the ballot to claim the award, while the Charlotte Independence’s Brandon Miller finished second on 35.6 percent and Pittsburgh Riverhounds SC’s Kyle Morton took third on 27.6 percent.

Factoring in playoff stats, Lundt’s nine clean sheets put him atop the league. That includes a 10-save performance and early penalty stop in an Eastern Conference Semifinal victory over Saint Louis FC. One week later, the boys in purple appeared in their sixth straight Eastern Conference Final, a defeat to the Tampa Bay Rowdies.

“While I’d trade the personal recognition for having won the Eastern Conference Final, I’m very honored to be named Goalkeeper of the Year from such a great group at the position this season,” Lundt said. “Thank you to my coaches, fellow goalkeepers and the whole team helping me strive to improve.”

The 2020 USL Championship Awards were voted on by team technical staffs and executives and a league-wide media panel that included representation from every USL Championship market. Voting was conducted following the conclusion of the 2020 Championship regular season.

USL Championship Goalkeeper of the Year