The goalkeeper came up with a season-high nine saves in a 2-0 win over Saint Louis FC. 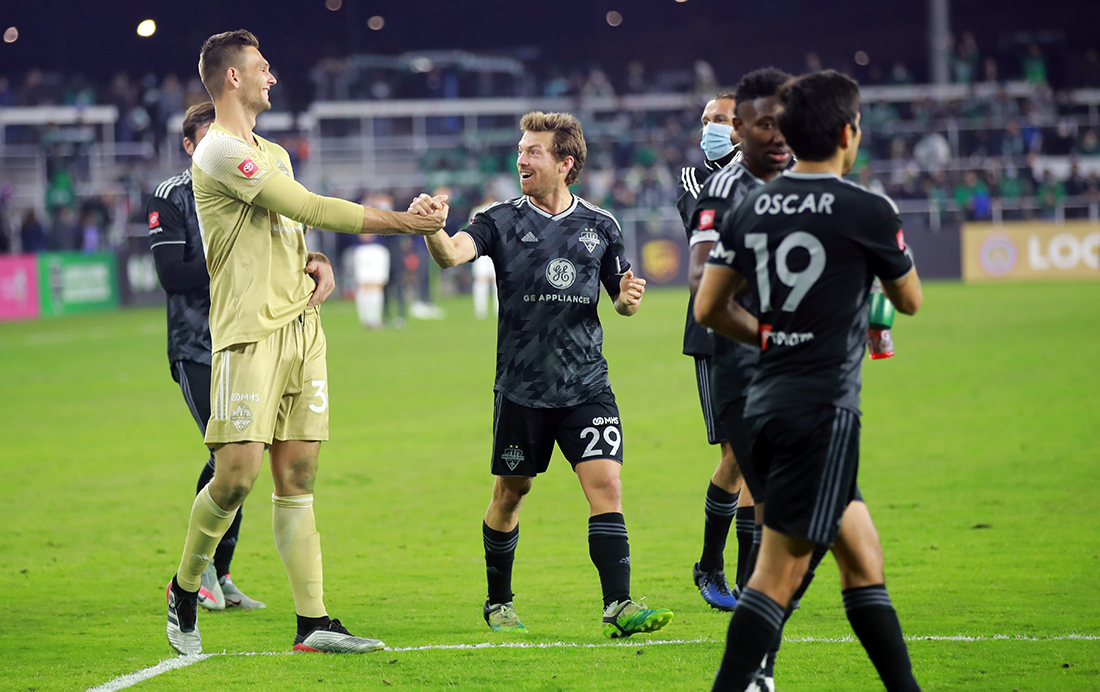 Ben Lundt has said it often this season: Playing goalkeeper for Louisville City FC is a tough gig.

That’s not due to the volume of shots Lundt expects to face between the posts, but rather the lack of them. Most games, his toughest task involves remaining mentally in a 90-minute contest happening mostly on the other side of the pitch, aside from one or two key moments.

In that respect, Lundt had been waiting on the type of opportunity he faced Saturday night, when the University of Akron product on loan from Major League Soccer’s FC Cincinnati saved a season-high nine shots.

“Today I was in the game early on and sometimes that’s good for a goalkeeper — staying engaged,” Lundt said after the final whistle. “Today I couldn’t really take my mind off of the game, and it worked well for me — but that is the challenge in every game.

It’s that final number — 120 — that may have made the performance what it was for Lundt. LouCity hosted Saint Louis FC in an Eastern Conference Final, with extra time and even penalty kicks a distinct possibility.

Goalkeepers coach Scott Budnick drilled Lundt this week on penalties, also studying habits of Saint Louis FC attackers. In the 12th minute, Lundt was predetermined to lunge left when Wal Fall stepped up to the spot after a teammate won a penalty.

Five minutes after Lundt turned the shot away, LouCity scored in a game it went on to win 2-0, advancing to an Eastern Conference Final matchup against the Tampa Bay Rowdies.

“He’s been amazing,” midfielder Antoine Hoppenot said of Lundt. “His second year he has grown a lot as a player and a lot as a person. I think he is opening up a lot in the locker room as well, so I think that’s helping. He’s feeling more comfortable with us as a team on and off of the field.

“It is really showing on the field. He is making some big saves and obviously that PK save makes the entire game. Without that, we’re down 1-0 early on and they can kind of get in a shell and make it a lot harder on us.”

The game remained an open one with Saint Louis FC chasing goals. The opposition out-shot LouCity, with the majority of its tries on target.

Lundt upped his season clean sheet total to nine, leading the USL Championship. To his earlier point, however, even with nine saves added Saturday he ranks seventh in the league in saves with 43.

“Sometimes you only get one or two shots on goal and you have to be there,” Lundt said. “Sometimes they’ll go in, especially earlier this season.”

LouCity went 1-3 upon the USL’s restart in July. While stumbling back from a break forced by the COVID-19 pandemic, LouCity’s coaches rotated in goal, giving a start to Chris Hubbard.

Lundt won the job back by the time the calendar turned to August. Since then, the boys in purple haven’t lost, nor have they allowed more than one goal in a game.

The penalty try presented a new challenge for Lundt. It marked the first penalty either awarded to LouCity or one of its opponents in 18 games this year.

“I was just focused on the moment and luckily it worked out,” said Lundt, who said he didn’t quite enjoy that sort of pressure.