Kernen: The good and the bad from LouCity's playoff win over Saint Louis FC 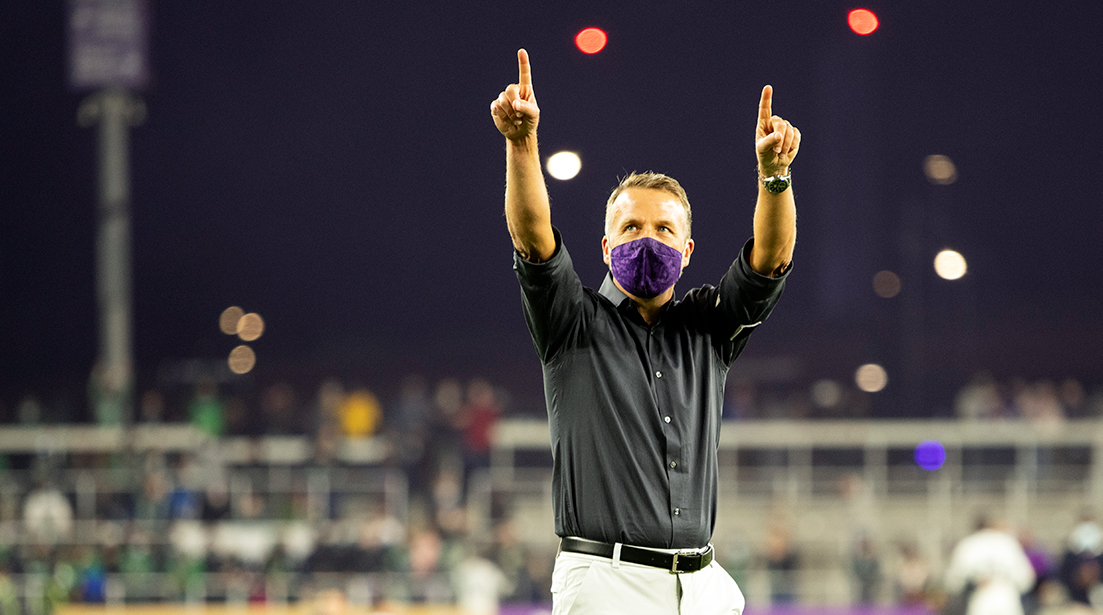 “One of these years, Louisville City FC won’t make the Conference Final,” I told myself in 2017. And in 2018, 2019 and yet again at the beginning of this year's playoffs.

I may be right at some point with the USL Championship ever expanding, but I am happy to be wrong again this time. LouCity won Saturday’s game, and that was the ultimate goal of the evening, but I would like to take a deeper dive into what we learned about this team from a hectic, 2-0 conference semifinal victory over Saint Louis FC at Lynn Family Stadium.

Another shutout, another win, another Eastern Conference Final

I will touch on the stellar performance of goalkeeper Ben Lundt in a moment, but the sheer amount of times that Louisville City has appeared in the Eastern Conference Final is quite literally unmatched. They are not only the hottest team in American soccer right now but also the most dominant in American soccer over the last half decade. Although the game against Saint Louis left a little room for improvement, the object of the exercise was to win, and that they did.

The way that LouCIty plays is not a “win at all costs” kind of style, where they abandon their interpretation of soccer for any route-one nonsense. The boys in purple know their strengths and play to them. The pace and passing ability of the wide players, the finishing ability of striker Cameron Lancaster, and the resiliency of the defense all showed up again for coach John Hackworth — albeit some elements were leaned on more heavily than others.

On no fewer than 10 occasions was Lundt subjected to a Saint Louis FC shot, and every single time he saved the effort. We knew that Lundt was quality, but he frankly has not had many times to show off his shot-stopping ability.

Lundt had a variety of saves to make, too — some from point-blank range, some after being screened by one of his defenders, and one most impressively from the penalty spot. He even had to call on his back line for a goal clearance late on in the game.

Was this the best game of his pro career? For sure. To the 122 people that did not vote for Lundt as the man of the match on the LouCity Twitter page, I have but one word: “Nuts!”

Something went gravely wrong in the Saint Louis FC defense to give Lancaster so much time and space inside the six-yard box. A Brian Ownby run, plus a well-rehearsed Antoine Hoppenot-Lancaster connection, was what yielded the goal, but it was created in training.

“We do finishing drills and we do crossing drills, so that is something that he knows that as soon as it happens,” Hoppenot said. “(Lancaster) peels off of the back post and I try to find him out there.”

An insane 10-minute period that included the missed penalty for Saint Louis, a non-decision for a challenge on Brian Ownby and a goal chalked off for the visitors also happened to have the eventual game-winning goal for Louisville.

Heads were spinning all around the ground, surely — but not on the pitch. It would be very easy to be jarred by any one of these, plus a couple City players also had early bookings. To come out of that specific passage of play not only without conceding, but to also find a goal in among the insanity is a testament to the sheer determination of the team.

Gave away a penalty that could have shaped the game

Sean Totsch can count his lucky stars that he saw the 12th minute of this fixture. Strictly speaking, he very easily could have been shown red for his challenge on Tyler Blackwood in the first half, and that would have made the script for the balance of the game very different from the one that played out on Saturday night.

Totsch’s challenge was necessary, although given that Lundt was in goal and the angle taken, would not have been a sure thing for the attacker. In the end, the referee deemed that either there was a play on the ball by Totsch, or that Oscar Jimenez was in a position to cover the goal for City.

Saint Louis FC was awarded a penalty, and Totsch saw a yellow card rather than a red.

Statistically, penalty kicks have about an 80 percent chance of going in, and had the ensuing seconds played out differently, or had Totsch made an early exit, a number of things would have changed in this game. In all likelihood, an attacking player would have been sacrificed for a defensive substitute, taking off a weapon for Hackworth. It would have invited even more pressure from the visitors, all without considering the change of game plan if the penalty had been scored.

In the end, all of that is luckily a theoretical situation that did not play out on the pitch at Lynn Family Stadium.

“We were late by that half second that you can’t be late,” Hackworth said in describing the defensive performance from his club on Saturday night. “That caused us some problems. Our reactions in cover positions weren’t good.”

While Lundt covered himself in glory between the sticks, his defense could equally be blamed for allowing as many chances as it did. I also found myself holding my breath a few more times than normal, as Saint Louis FC spent an inordinate amount of time in the Louisville box compared with most opponents.

LouCity looked just that step behind, with a few too many misplaced passes, and a couple of unsupported and unproductive runs. Luckily it did not cost the boys in purple as much as even a goal this game, but relying on one element of your team to support the rest is a dangerous habit to form in the sharp end of the season.

This might not have been the most convincing win of their last eight wins, but it is the most important. All in all, the game hinged on a few very big moments, and they nearly all happened at the beginning of the game, and they mostly went in our favor. That is not to say that that was by chance, because you certainly do not find yourself in a sixth consecutive Conference Final by coincidence. They have their next week of training cut out for them, and if all goes to plan, they will have another game to prepare for this time next week.