Kernen: The good and the bad from LouCity's 2-0 win over Pittsburgh 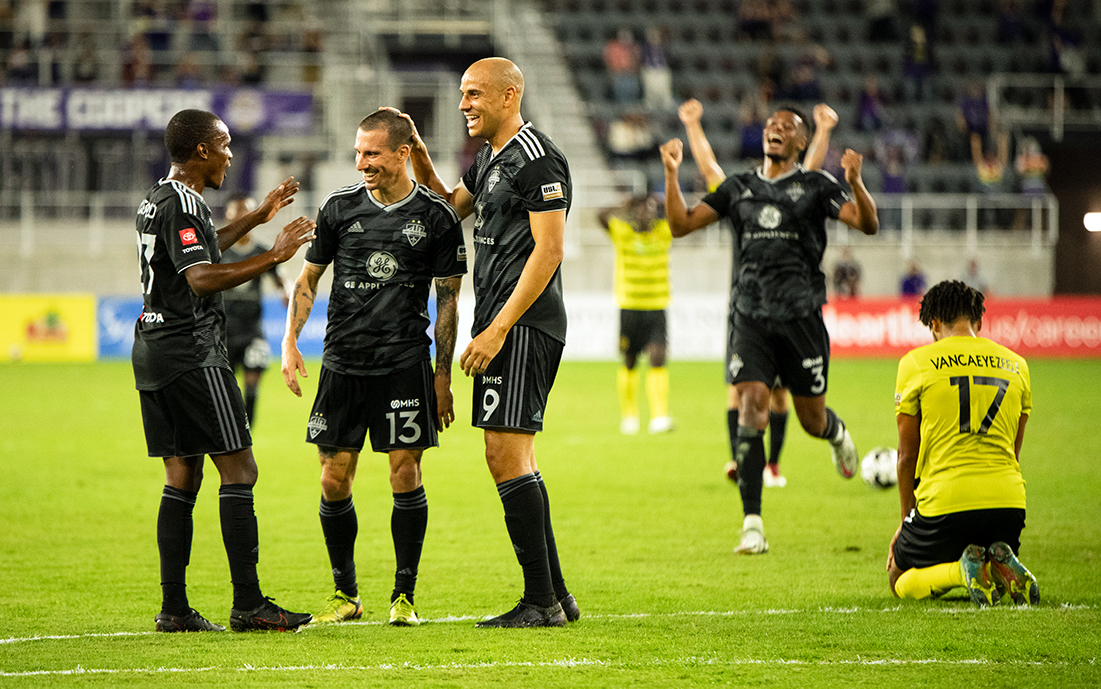 What a win. It was a nervy evening for many on Saturday as Louisville City FC sank Pittsburgh Riverhounds SC to move on in its quest for another USL Cup. Although the reputation of Pittsburgh preceded the notorious Bob Lilley-coached team, there ultimately proved to be no reason to fear the ‘Hounds as the playoffs began. LouCity continued its tear of form with a 2-0 victory, but beyond any runs or momentum they showed that they can deliver against any team.

Here’s what we learned at Lynn Family Stadium…

It’s plain and simple. Avoiding the obvious “survive and advance” platitude, City thrived in this game given how close contests between these two sides have been in the past, including a playoff meeting last year determined by one goal. This team has the belief that it is the best in the USL, and the boys in purple have the silverware to back that up. It is not about trying to simply negotiate the way to a final for LouCity. When playing as it did Saturday, everyone can recognize the team to beat.

We all know the talking points on the Riverhounds: solid, strong defenders and a counter attacking style. More than just size in defense, though, they have cohesion. Despite that, City straight up beat Pittsburgh at its own game. In particular, the opening Cameron Lancaster goal was a work of art.

First, the assist from Oscar Jiminez was driven into the box, not lofted where it could have been easily headed away. Lancaster was also well placed in front of goal and was first to react to the ball, redirecting it right into the bottom corner of the Riverhounds’ goal. At every point, that play had a minuscule margin for error, and yet it was administered perfectly.

That goal aside, City won nearly all statistical areas of the game, and remarkably limited the guests to a single shot on target, one hastily dealt with by Ben Lundt in the 13th minute. City exploited the ‘Hounds on the counterattack too, and should have doubled their lead in the first half on more than one occasion. More on that to come, but also to be able to move on from the missed chances and come back to make an impact was something that this team accomplished on both a personal and collective level.

LouCity fabricated a catalog of chances against a Pittsburgh team that is notable for limiting them. They scored twice on a Golden Glove winner who was shipping half a goal per game on average. LouCity also limited a team that has scored 39 goals this season to a single, low quality shot on target. They just flat out beat them. Beyond the statistics, they continued their stride right though into the next round of the playoffs.

Allowed frustration to show, at times

There were more than a couple of obstacles to overcome on Saturday night, and it was not always done in the most graceful fashion. With a few head-scratching calls being handed down throughout the evening, the home team had more than a stingy visiting side to overcome. A few situations where a City player earns a soft yellow here, a missed call there, and we could have seen a red card issued at Lynn Family Stadium.

Although he may have exerted more energy and might have covered more ground than anyone else on the pitch, Brian Ownby also was just too aggressive at times when it came to winning the ball back for his side. Earlier on, after a Pittsburgh player failed to get booked for an eminently bookable challenge, Antoine Hoppenot also talked his way into a yellow card himself. It is just a few small things that took a slight sheen off of the otherwise peerless performance.

Left some chances on the table

Although City ended up with a two-goal win, for most of the game Pittsburgh was an effective counterattack away from leveling the game. Now, whether the City defense would yield in such a way is debatable, but there were some very promising chances left on the table by the home side, particularly in the first half.

Some were a result of a significant defensive intervention on the part of a Pittsburgh defender or goalie. Some were just flat-out missed passes. But all of them should have been scored.

Coach John Hackworth agreed in his postgame press conference, noting that although his team was strong in defense, the attacking phase lacked at moments. As with most things I end up writing about in this section amid what’s now a 12-game unbeaten streak, it did not ultimately impact the game, although it may have come into play if Pittsburgh brought some more heat onto the CIty defense.

Throughout the last week, I was concerned about the matchup against Pittsburgh. They were the toughest out LouCity had on paper until the Eastern Conference Final, and the boys in purple still ran out clear winners.

Saint Louis FC continues to be difficult, however, especially given the club’s prolonged and public wake that has turned into a scene from Night of the Living Dead. That being said, as long as CIty performs to its standard, I continue maintain that the only thing stopping them is running out of teams to play this postseason.