It'll be a rematch next week with Saint Louis FC in the second round. 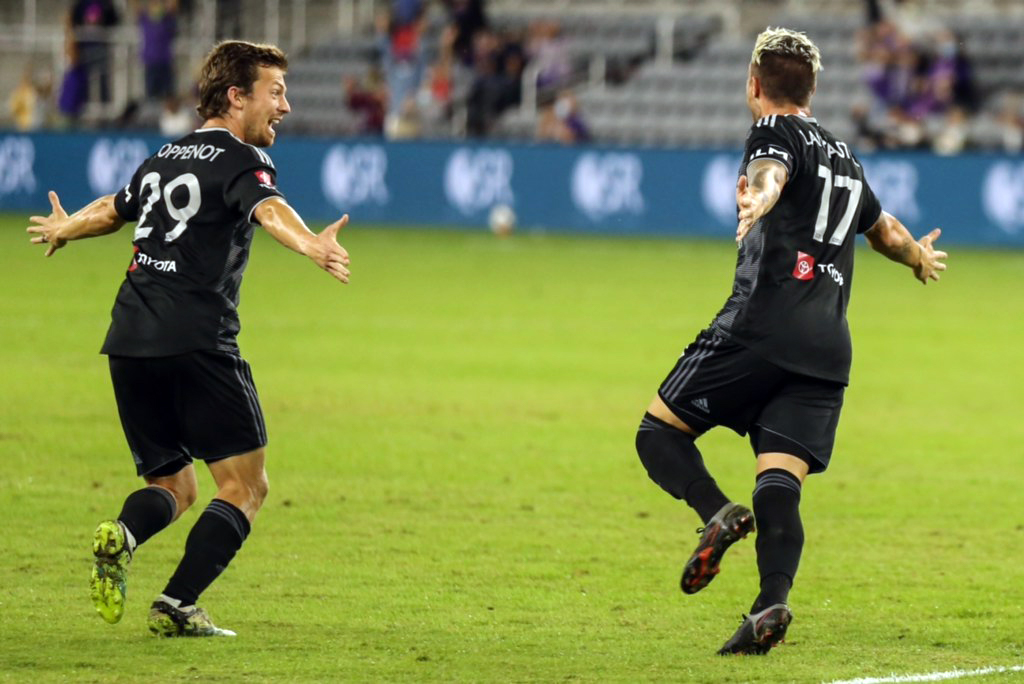 At the first half hydration break Saturday night of a USL Championship Playoffs opener, Louisville City FC defender Oscar Jimenez approached coach John Hackworth and said, "‘Coach, it’s just going to be a grind the rest of the way."

"And I was like, ‘Hell yeah, it’s going to be a grind, so keep doing it,'" Hackworth replied.

The boys in purple preserved their lead en route to a 2-0 victory over Pittsburgh Riverhounds SC at Lynn Family Stadium.

With the win, LouCity advanced to host rival Saint Louis FC at 7:30 p.m. on Oct. 17. Season ticket holders will attend, with a very limited number of tickets going on sale to the public Tuesday.

“Playing Pittsburgh, it’s always going to be a very physical and hard-fought game," Hackworth said. "A lot of little moments where you have to get a nick of the ball and that next touch in. It was that way from the start...But that’s what it is — playoff soccer."

With his sixth goal in as many games, striker Cameron Lancaster nicked in a cross from outside back Oscar Jimenez to put LouCity ahead for good in the game’s 18th minute. Following a number of other easier chances, a bit of luck doubled the lead in the 87th when a Corben Bone shot from distance skipped off the hands of Pittsburgh keeper Danny Vitiello and spun across the line for a goal.

As a result, LouCity got a bit of revenge. Back on July 12, when the USL Championship resumed play amid the COVID-19 pandemic, the Riverhounds spoiled Lynn Family Stadium’s debut game by a 3-1 score.

“The loss helped up learn a lot from our performance," Lancaster said. "In a sense you want that loss to come at the beginning of the season so we can learn from it. You saw it out there. We played a lot better than we did the first game of the season.”

Regionalized scheduling and playoff structure led to this rematch. LouCity entered on a run of 11 games unbeaten, while Pittsburgh appeared the league’s strongest No. 2 seed, riding in with wins in six of its last seven.

The boys in purple held the ‘Hounds to just one shot on target — a 13th-minute moment when Albert Dikwa crept behind the home team’s back line for a point-black look. LouCity keeper Ben Lundt cleared it off, and Steevan Dos Santos’ try off the ensuing rebound flew wide.

The recently named Golden Glove winner Vitiello stopped what could have been the go-ahead goal in the 15th minute when turning away LouCity’s first shot on goal by Brian Ownby. Three minutes after that, Lancaster’s talent in redirecting the Jimenez cross instead did the trick.

"In the moment, it happened so fast," Lancaster said. "I saw the defenders drop, OJ put in a great ball and I was focusing on just getting it on target, hitting it low, and thankfully it went in."

LouCity out-shot Pittsburgh 7-3, with seven of its attempts from inside the box, and controlled 51.7% of the possession. In a physical game, the sides combined for 11 fouls, including three yellow cards.

It could have been 2-0 going into the half, but Antoine Hoppenot, on a breakaway toward Pittsburgh’s goal, pushed a pass just by Brian Ownby, who could have tapped in to finish. No matter, as Bone struck late to cement a win and Lundt turned in a league-leading eighth shutout performance.

LouCity went into the postseason as Group E’s No. 1 seed with Pittsburgh second in Group F. The corresponding game between No. 1 Hartford Athletic and No. 2 Saint Louis FC was determined Saturday by a stoppage-time winner.

Previously, LouCity claimed the final edition of what’s known as the Kings’ Cup rivalry with Saint Louis FC, winning two, drawing one and losing one of their regular-season meetings.

“I personally thought that Saint Louis was going to beat Hartford. They’re too good of a team," Hackworth said of a side that's wrapping up its final season of play, making way for Major League Soccer in the St. Louis market. "You talk about a team that battles and competes for everything. That’s what they are. They also try and play good soccer. They’re well-coached. They’re organized, and there’s a lot of character.

"We have another game next Saturday, here at Lynn Family Stadium, where we have to do the same thing. Hopefully we can dictate the terms a little bit more, but it’s not easy playing Saint Louis for a fifth time in a very small amount of time.”

17’ Cameron Lancaster left-footed shot from the center of the box to the bottom-right corner. Assisted by Oscar Jimenez with a cross.

87’ Corben Bone right-footed shot from outside the box to the center of the goal. Assisted by Jason Johnson.