The Jamaican international has poured in four goals while leading the passing game. 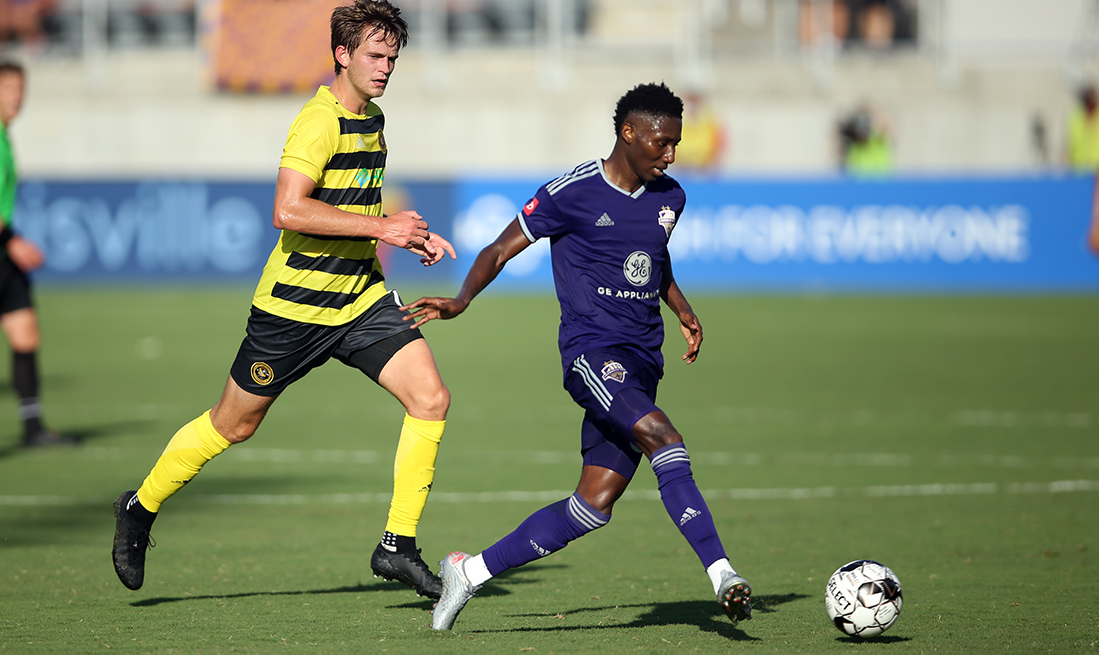 Devon “Speedy” Williams likens his role at Louisville City FC to an engine propelling his side. In that respect, the midfielder is firing on all cylinders as LouCity’s abbreviated season concludes.

A Jamaican international in his fourth year wearing purple, Williams ranks third in the USL Championship in passes attempted at 904. He’s also sitting on a career-high four goals as LouCity’s set to welcome Sporting KC II for a 7:30 p.m. Saturday regular-season finale at at Lynn Family Stadium.

“It’s fantastic to see him producing and getting a little of the limelight,” said LouCity coach John Hackworth. “He does so much work on the defensive side and being what we call our pivot — building out of the back and providing that next pass into our attack.

“For him to find the back of the net as frequently as he has just shows the kind of quality he has but also players taking on different roles and responsibilities within our team.”

Before the 2020 campaign, Williams, who first played professionally for New York Red Bulls II, had scored one goal apiece per season operating out of the central midfield — situated in front of the defense, but behind the lead attackers.

So what’s changed this year?

“It’s nothing crazy,” said Williams, who insists he’s not hunting goals. “I’ve just been in more goal-scoring positions — more than in previous seasons.”

Hackworth joked that the initiative may come from a goal-scoring clause in the 28-year-old’s contract.

“Now he’s trying to poach goals right and left,” the coach said with a smile.

Williams opened Lynn Family Stadium with the new facility’s first goal on July 12 as the USL restarted play amid the COVID-19 pandemic. He scored twice against the Indy Eleven in key meetings between the rivals, then headed in a game winner last Saturday at Saint Louis FC.

“We have a lot of fun with the fact that he may have, or may not have, stolen that goal from Oscar (Jimenez) on the weekend,” Hackworth said, with Jimenez’s corner kick looking to be curling in anyway. Williams’ final touch, however, directed the ball into the back of the net that much faster to make the difference in a 1-0 game.

Williams has won USL titles with the Red Bulls II (2016) and LouCity (2017, 2018). Despite that, defender Alexis Souahy sees his teammate’s confidence at an all-time high as LouCity rides a 10-game unbeaten streak into the weekend.

“I think he’s been having a great year not just by scoring goals but by making defensive plays, being in the attack — just his ability in general,” Souahy said. “He’s been playing very well for us.

“…The goals he’s been scoring are just in addition to what he’s been doing for us. Everyone’s happy for him.”

Williams, who leads LouCity with 1,332 minutes played, is compelling 86% of his passes. Nearly 84% of his passes in the opponent’s half of the field — often moving forward — have been accurate.

That includes a key sequence Sept. 12 against Saint Louis FC when he collected the rebound off a blocked shot, played through and found forward Antoine Hoppenot behind the Saint Louis FC defense. Hoppenot drilled the first goal of that game, also his first of the season, to add an assist to Williams’ stat line.

“I’m just in the right spot at the right time most of the time,” Williams said. “My job is just to organize the midfield — the defense and the attack. I’m like the engine. They always call midfielders the engine so the car can go. That’s my job — to make the team tick.”