Preview: What to watch for with LouCity at Saint Louis FC

The Kings' Cup rivals' final meeting this season could also be their last one ever. 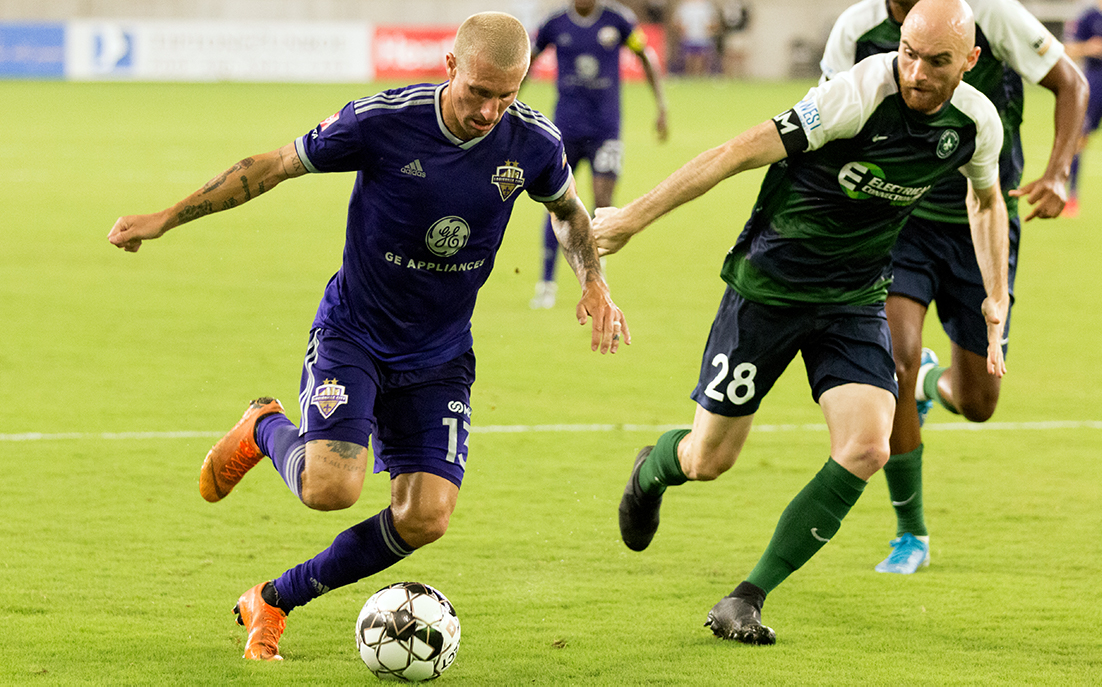 On the heels of Louisville City FC mathematically clinching a USL Championship Playoffs spot, focus will inevitably shift to the postseason and pursuit of the club’s third title. First, however, there’s another trophy at stake Saturday night.

LouCity travels to play rival Saint Louis FC, with kickoff at 8 p.m. ET at West Community Stadium in Fenton, Mo. The fourth meeting for these two during this abbreviated campaign is also likely the final one given Saint Louis FC — which has a Major League Soccer franchise entering its market soon — will cease operations at the season’s end.

The boys in purple have never failed to claim the season series, known as the Kings’ Cup. It dates back to both clubs’ inaugural game in March of 2015 and has lasted through Saint Louis FC’s ping ponging between the USL’s Eastern and Western conferences.

The 2020 series is knotted up at one win apiece to go with a draw. To claim the crown once again, LouCity needs either a win or draw, given it enters with a +2 edge in goal differential, the first Kings’ Cup tiebreaker.

Much has changed since Saint Louis FC opened Kings’ Cup play with a 1-0 victory — its first win ever in Louisville — back on July 18. That was part of a 1-3 restart to the season for the boys in purple, who righted themselves to begin August and haven’t lost since on a nine-game unbeaten streak.

LouCity has climbed from last of four in the USL’s Group E to the top. That’s where the club’s likely to stay with a 9-3-2 record, good for 29 points, entering Saturday. LouCity is six points clear of Indy Eleven and seven beyond Saint Louis FC. With two games to go, the good guys need just one more point to secure a No. 1 playoff seed.

Saint Louis FC remains in the thick of a battle to make the playoffs with the top-two from each USL group advancing. A draw Wednesday against Indy Eleven kept the club within reach, but Saint Louis FC will need to stay within three points of Indy given this weekend’s results to still have a shot at qualifying.

“Nothing changes from our approach or mentality, especially what we talk about on the inside because we feel like we still have work to do to secure first in the division. More importantly than that, we want to finish and continue our strong run of form heading into the playoffs. That’s what we have done in the past. We know how important that is. We think there are areas we can improve — some details that we have to get right in order to achieve our ultimate goals.”

LouCity: Cameron Lancaster already ranked near the league lead in goals, but he reached for another gear last week, hitting the back of the net three times in two games while reaching a milestone of 50 career USL regular-season goals. Lancaster has scored nine goals this season, and the former Golden Boot winner leads all players with 46 shots tried. In the bigger picture, US Director of Content Nicholas Murray pointed out Lancaster’s efficiency. Of those players with 50 goals, Lancaster has scored once every 114.8 minutes. Next closest is Dane Kelly at 153.3 minutes per goal.

Saint Louis FC: Goalkeeper Kyle Morton ranks second in the USL with 46 saves, indicating just how often he’s called upon between the posts. But will Morton be ready to go Saturday? In Wednesday’s game at Indy, he suffered frequent cramps late in the going and struggled for optimal movement in the box. Saint Louis FC could be without a keeper whose saves success rate of 74% is seven points higher than No. 2 goalie John Berner. Morton, who played last season for regular-season Eastern Conference champion Pittsburgh Riverhounds SC, has faced 62 shots this season and conceded 16 goals.

On the WBKI-TV (The CW)/ESPN+ streaming call: Mike Watts (play by play) and Gary Bailey (color).

What awaits: The Nos. 1 and 2 seeds from Group E will match up to begin the playoffs versus the 2 and 1 from Group F, respectively. Pittsburgh Riverhounds SC (10-3-1, 31 points) and Hartford Athletic (8-3-1, 25 points) have already locked up playoff positions and are likely to finish in that order. Pittsburgh is a familiar foe for LouCity; the clubs met in last year’s playoffs, a win for the boys in purple, before the Riverhounds claimed a victory when the USL restarted the 2020 season in July.

National spotlight: For the first time, it was announced this week, the USL Championship Final will get the ESPN treatment. The game will air at 8:30 p.m. on Nov. 1 after a trio of preceding playoff rounds. The Conference Quarterfinals start the postseason Oct. 9-11 before the Conference Semifinals (Oct. 16-18) and Conference Finals (Oct. 23-25). Better seeded clubs host opening-round games. Beyond that, record will determine home field advantage.

Streaking side: Twice in the John Hackworth era at LouCity, the boys in purple have rattled off 10-game unbeaten streaks. They have a chance to match that Saturday, going back to July 29 since a defeat, a run of nine straight games. In 2018, LouCity closed out its championship chase on 10 games unbeaten, then repeated the feat from August to early October of 2019, entering the playoffs strong.

Missing pieces: Saint Louis FC will be without two key players Saturday who, with more than 1,000 minutes logged apiece, are among the club’s leaders. Both midfielder Todd Wharton and defender Sam Fink were shown multiple yellows and sent off from Wednesday’s 1-1 draw at Indy Eleven, meaning they’ll have to serve a one-game suspension Saturday. Wharton has tallied three assists this season, while Fink has scored a goal leads his side with 52 clearances.

The right role: Brian Ownby has been in and out of the starting lineup during LouCity’s recent stretch of games. That hasn’t stopped him from contributing to goals. In a 2-0 win Sept. 16 over Indy Eleven, Ownby came off the bench and used some soft touch to assist Corben Bone’s late goal that doubled the lead. Then last Saturday in a 4-1 win over Memphis 901 FC, he went all 90 minutes, curling in his first goal of the season to go along with an assist. The veteran midfielder/forward has proven potent in relief of Napo Matsoso, who excelled once moved to the right wing midseason.

Dad delivers: Only a couple weeks after he became a first-time father to son Emory, veteran forward Luke Spencer was back on the team sheet for last Saturday’s Memphis game. As an 83rd-minute sub, he was quick to make an impact, connecting with Corben Bone for his side’s fourth and final goal in a rout at Lynn Family Stadium. Spencer, 29, has involved himself with other aspects of the club since signing for the 2017 season, also serving as a youth academy coach.

Leading the way: Entering Saturday, a foursome of LouCity’s 2020 stat stuffers remain prominent on a national scale. Goalkeeper Ben Lundt is tied for the league lead with six clean sheets, while Devon “Speedy” Williams is second with 839 passes attempted. These players all rank fourth in their respective categories: Cameron Lancaster in goals (9), Antoine Hoppenot in assists (5) and Corben Bone in chances created (33). Lancaster is also tops in the USL in shots tried at 46.