Kernen: The good and the (very little) bad from LouCity's latest win 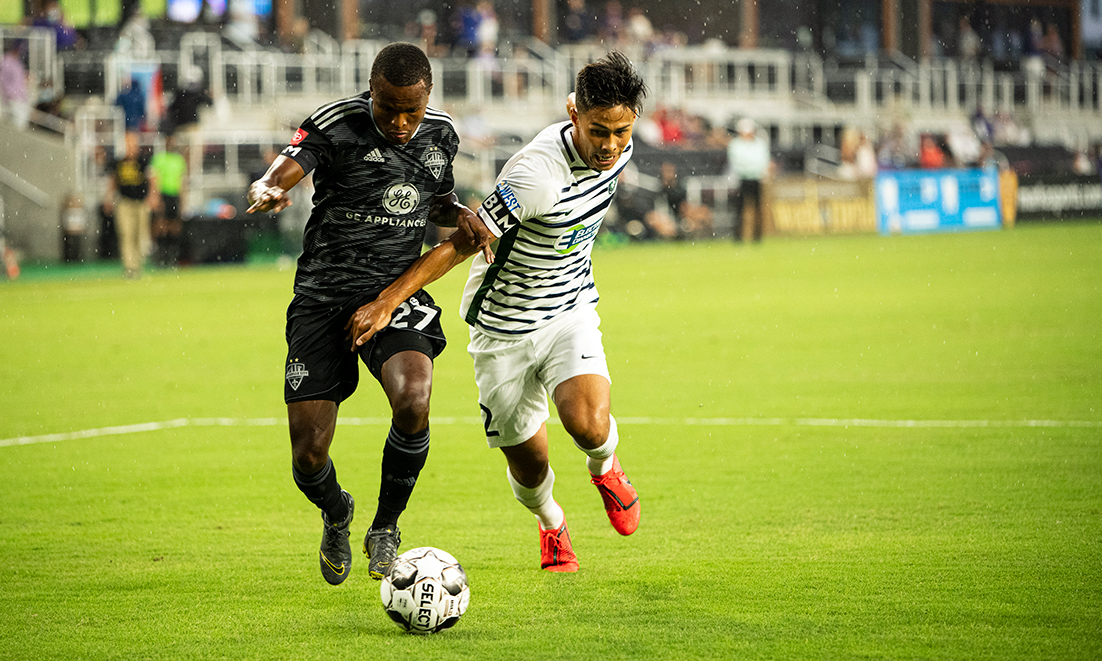 It was another emphatic win for Louisville City FC on Saturday night, this time beating the last team in Group E that they had yet to best in 2020, Saint Louis FC. It is hard to poke holes in a 3-0 win, so here is what I at least thought went right for the boys in purple.

Although coach John Hackworth said we are unlikely to see it again for a while, the 3-5-2 look worked for LouCity. It utilized Antoine Hoppenot and his ability to find his most natural positioning and preferred spots on the field, while retaining the firepower of Cameron Lancaster and the work rate of Napo Matsoso. Hoppenot was given full license to go out and hunt how he wanted. He found incredible amounts of space to run into and registered his first goal of the season.

It may have also been a case of Saint Louis FC not being ready for the reworked approach, but more than that, LouCity definitely bent the game to its will. In a season where clubs have to evolve over the year, the combination of assistant coach Danny Cruz and Hackworth keep coming up with new schemes to throw off the group rivals.

Rather than letting off the gas as LouCity most notably did against Indy Eleven in spurts of the second half last game out, Hackworth doubled down on the pressure Saturday. Implementing what the team learned from Indy was a clear point once LouCity established the game, and Saint Louis FC never looked like it got to play how it wanted.

Having scored eight goals within the first 30 minutes in the last eight games, the boys in purple have a pretty clear game plan: Unsettle, score, pressure and repeat. It is one of the few things a team cannot really prepare for, because LouCity makes it happen as a team. The fluid pressure, coupled with a sharpened focus on goal scoring has this club playing as the best team in the Eastern Conference. That is not to say that things did not get nervous for Louisville at times.

With a 2-0 lead most of the way over the visitors from Missouri, a goal for the opponent could potentially send some teams into a tailspin. Rather than bow to nerves, LouCity found the third goal late that completely iced the game for the hosts.

For a couple of reasons, the first goal of the game was big for Hoppenot. Acutely, it put LouCity into the lead when the team had been searching nearly a half hour for it. Beyond that, it represented the first goal for him this campaign, confirming the faith that Hackworth has put into Hoppenot.

He was already the team leader on assists for the season, so adding another one to his tally this game made him the clear Man of the Match choice. After Hoppenot arrived here in a trade last season, he added so much more than a goalscoring threat to the team. He stretches defenses and is a force multiplier for his teammates.

I think Matsoso may still be out there running around. I do not know how he manages it, but the midfielderhas as much energy and positivity at the end of the game as he does at the beginning. His work rate with the ball is remarkable, and he is usually doing something positive with it when he has it, and Saturday night was no different.

The University of Kentucky product is the kind of player who sticks out, even if not on the stat sheet this game around. He is a flair player who works hard, which is what makes him so unique.

As for any negatives, I am grasping at straws to find something out of character for LouCity…

Not a great outing for Oscar

The new-look formation benefitted the team as a whole. Keeping the principles of simple passing while creating new lanes and movements was much more evolution than revolution, yet it created more for some players than it did for others.

On paper, one player that should have had a natural fit in a more wide and offensive position is Oscar Jimenez. While Jimenez is one of the best fullbacks in the league, it looked like he needed more time to adjust to the midfielder’s role. It may have simply been an off night coupled with some different duties. But more than once or twice, Jimenez could be found giving the ball away or missing a connection.

Jimenez has built his reputation on getting up the field, but that is generally as a linking player as of late, rather than an outright creator that he found himself trying to serve as here. Again, on a brilliant performance by the team a somewhat lackluster showing will stick out doubly. Luckily for Jimenez, Hackworth is almost certain to return to his usual four-man backline on Wednesday in Indianapolis.

After every game during this unbeaten streak, I feel like I am writing the same words in a different order: “Can they build on this performance and separate themselves?”

While LouCity has accomplished the former in just about every game the last month, the latter has eluded them. The win against Saint Louis FC, however, ensures that the boys in purple are fully in control of their playoff destiny with four games remaining.

Wins against Indy on Wednesday and against Memphis 901 FC next Saturday would probably be enough to secure a spot in the playoffs. Indy and Saint Louis still have to meet twice, so it would benefit LouCity if they take points off one another.

The team is flying now. It will be an interesting clash against Indy, who had the weekend off and a full seven days to prepare, although given the chance in tactics they probably couldn’t have learned much from the LouCity performance Saturday.