The boys in purple dominated the stat sheet but not the scoreboard on Wednesday night. 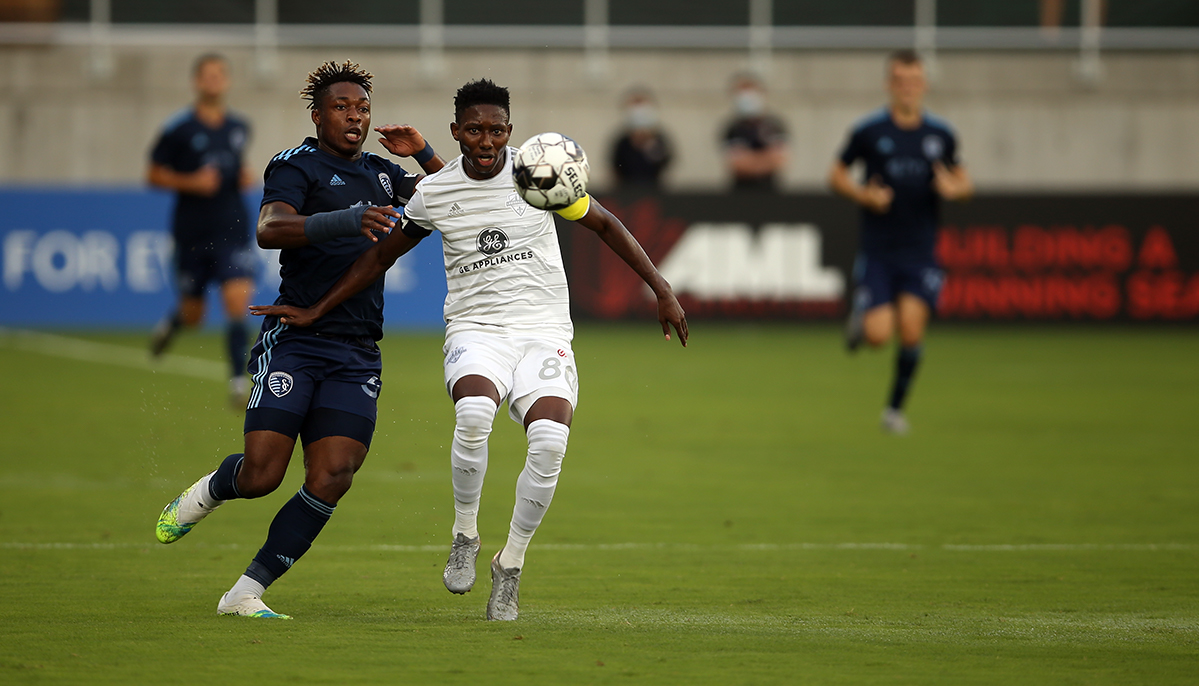 The Louisville City FC striker put away a beauty of a free kick Wednesday, but a pair of poor touches led to Sporting KC II goals as the visitors walked away with a 2-1 victory at Lynn Family Stadium.

The result, the first win in 2020 for Sporting KC II (1-3), marked the third loss for LouCity (2-3) in four games since the USL Championship restarted play earlier this month.

Coach and sporting director John Hackworth said after the final whistle that, "We have too much quality to at times put on the performance that we did tonight.

"...“We didn’t play our game, and in the first half you could tell we were tentative," Hackworth added. "After a real good start, for whatever reason, we played really conservative. We’re a team that doesn’t play backwards a lot, and we went backwards a lot tonight. We didn’t take guys on one versus one when we could have. We didn’t attack them the way that we should have."

Lancaster’s tally came in the 21st minute. From outside the box, he went right to left with a set piece strike that gave the opposing goalkeeper no chance to save.

The Major League Soccer loanee from Nashville SC has now netted three shots on the season, ranking second in the league behind Indy Eleven forward Tyler Pasher’s five. His other two goals both put LouCity on the better end of 1-0 victories.

At the time Wednesday, Lancaster leveled the score 1-1 after Sporting got on the board in the sixth minute. A cross was deflected but not cleared by the LouCity back line, allowing forward Dominik Resetar the chance to slot his shot in the back of the net.

The game winner followed in the 83rd minute. LouCity was poised to regain possession in the midfield, but a short-footed pass led to a turnover. Jake Davis led the break, assisting Wilson Harris' goal.

LouCity wasn’t without opportunities during the run of play, particularly during a 13th-minute sequence. The 16-year-old Jonathan Gomez — making his first start on a professional contract — crossed well into Lancaster. LouCity’s initial try was saved, Sporting goalkeeper Remi Prieur managed to gather himself up, then dove to block the putback try by Napo Matsoso.

Later, in the 76th minute, Akil Watts was taken down on a collision in the box. Much to the chagrin of 4,850 fans at Lynn Family Stadium, there was no whistle from the referee -- and there was ultimately no late answer from the boys in purple.

"It was a really great experience for me, and obviously the team is the most important and we didn’t get the result," Gomez said after the start, "so it is an accomplishment for me but we have to build on it, turn it around this week and keep working."

The stat sheet reads in familiar fashion during this early season skid as LouCity out-shot its opponent 21-9 and held possession the majority of the way, at 53.5%. But the points didn’t follow.

There’s extra time to ponder this outcome with the club off this weekend. Loucity next hosts USL Group E-leading Indy Eleven on Saturday, Aug. 8, at Lynn Family Stadium in what will be a key matchup in the bigger picture.

LouCity’s fighting to finish in the top half of a pod also consisting of Saint Louis FC and Sporting KC II. The No. 1 and 2 clubs advance to the playoffs at the end of a 16-game regular season.

Louisville City: 21’ - Cameron Lancaster from a free kick with a right-footed shot to the top left corner.