The veteran defender's a needed locker room presence as his club deals with a losing streak. 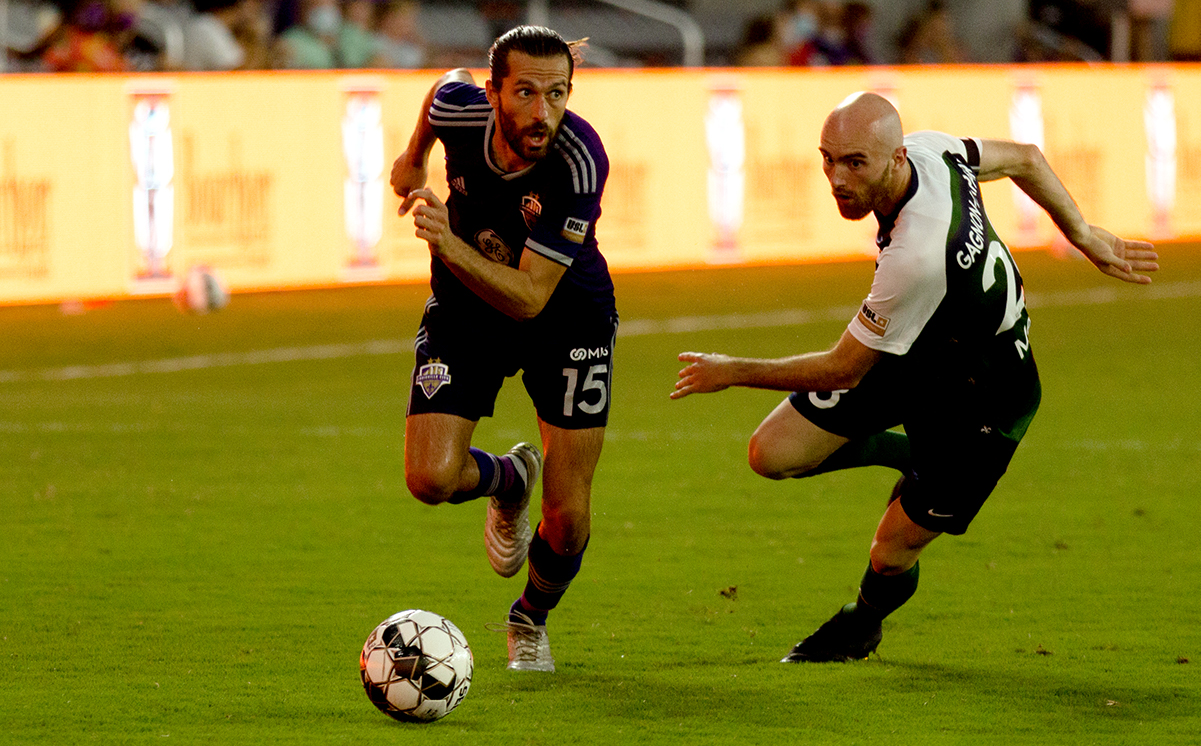 His name’s Pat McMahon on the team sheet, in the game program and on the official roster.

Around the locker room, though, you might hear the Louisville City FC defender referred to by his nickname: “Vibes.”

“He just kind of exudes this coolness,” said LouCity coach John Hackworth. “It’s not with his words. He’s certainly is a man of action. It’s more about the feeling that he gives off to everybody, thus the nickname.”

McMahon was inserted back into LouCity’s lineup last Saturday against Saint Louis FC. Voted Man of the Match in the 1-0 loss, McMahon led his team with five tackles and three key passes in addition to an astonishing 10 repossessions, according to Opta statistics.

The 33-year-old — the eldest member of the roster — figures to put his leadership by example on display at 8 p.m. Saturday when LouCity hosts Sporting KC II at Lynn Family Stadium. The boys in purple are seeking to end an uncharacteristic two-game skid since the USL Championship restarted play earlier this month.

“Me being an older player on the team, I think talking to people, it’s [about] keeping our confidence — enjoying it at training,” McMahon said. “Sometimes we miss on that because we harp on needing a win and focusing on that, but I think we take care of the little things and get the enthusiasm and back to enjoying it, then we play better and obviously start winning games.”

With age, McMahon has a resume to match. Before becoming an integral piece of the LouCity back line, he played against some of his current teammates as a member of the Rochester Rhinos, winning the 2015 USL title there. He then suited up for former USL rival FC Cincinnati.

McMahon signaled oncoming longevity as a professional during his collegiate career. He set a school record for 85 consecutive starts at his alma mater, the University of Illinois at Chicago.

“He’s an older guy, but he doesn’t act like an older guy,” said LouCity midfielder Napo Matsoso. “He’s one of the nicest people I’ve ever met and he’s phenomenal. He’s really good and works hard every day at training.

“He never gives up, and whatever you need, he’s always there for you. Everyone on the team likes Pat, and I don’t see why you wouldn’t as a person.”

McMahon pointed to mentorship of his younger teammates, particularly rookie defender Jonathan Gomez, who signed with the club in March.

“I talk to him a lot just because we play a similar position and obviously he’s 16, so I think he can learn a lot,” McMahon said.

Hackworth, also LouCity’s sporting director, commended McMahon on his demeanor off the pitch. But Hackworth had this to say upon hearing Matsoso claimed the defender “never gets pissed off.”

“No, but he’s got a lot of fire in the belly,” the coach said, “so you don’t want to make him mad on the field. Away from the field, he’s one of the nicest people I’ve ever been around.”

McMahon expects results will change for the better with LouCity, which has a unique schedule ahead, also hosting Sporting KC II on Wednesday to make this a doubleheader of sorts.

“For me, as a defender, it comes on us,” McMahon said. “Defense wins championships. And once we start getting goals and that confidence, it’ll improve.”