The boys in purple look ahead next to a visit from Saint Louis FC in "Group E" play. 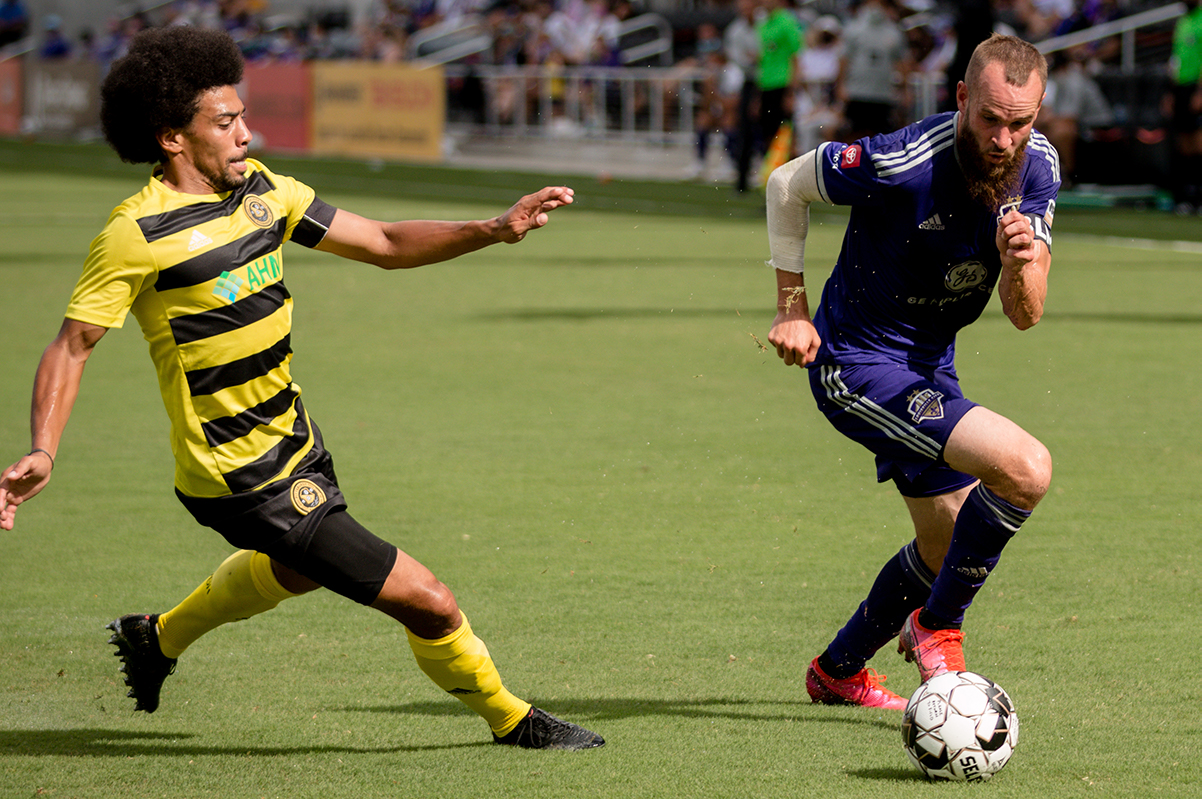 After the final whistle, LouCity coach John Hackworth lamented that the boys in purple — and the 4,850 fans on hand to support them as the USL Championship season restarted — didn’t get to continue the festivities.

“I would have loved for that game to have a much better ending so that we can celebrate, both this building and the opening of it, and the result,” Hackworth said of a 3-1 loss to Pittsburgh Riverhounds SC. “Unfortunately, that didn’t happen today.”

LouCity players echoed Hackworth in saying they let up after a flurry of early chances gave them the lead. The Riverhounds, who won the USL’s regular-season Eastern Conference crown in 2019, answered with three goals in six minutes on either side of half.

“I think coming out of halftime, that’s very uncharacteristic of us, to come out that way and make the mistakes,” Hackworth said. “It’s even more uncharacteristic of us to not come out and fight. We had plenty of time to get back in this game despite all the craziness that happened. A lot of added of time there and a lot of stoppages, but it’s on us to do a better job at managing the game and getting ourselves back in.

“Really, I don’t even think we did a great job at creating opportunities. That’s something we will have to fix.”

Statistically speaking, LouCity held 65% of the possession, out-shot the Riverhounds 11-6 and generated 9 corner kicks. Many of those numbers harken back to dominance during the opening few minutes.

In the 45th minute, the equalizer came when Pittsburgh’s Jordan Dover slipped behind the home club’s back line while stabbing in a lob pass from teammate Kenardo Forbes. LouCity then quickly lost grasp of the game out of the locker room when giving up possession twice in its own half led to other Riverhounds goals.

“I think we took our step off,” midfielder Brian Ownby said, “and one little mishap, a nice volley over the top and a good finish, then come out at halftime and give two goals away...it’s frustrating. But the only thing we can do is watch the tape and move on, and I think that is something that our team has done in the past.

“We have had a bad performance and we go on a little streak, so we’re hoping that going forward our team gets back together this week and move on."

Hackworth looked for a change of pace, using all of five allotted substitutions, a new rule implemented for a condensed season and with more than 100 days since LouCity’s last game.

“For some reason we couldn’t find it back,” Williams said of LouCity’s momentum, “and that’s what happened.”

Asked of Hackworth’s locker room message, Williams added: “He was disappointed, but he was also positive. He was like, ‘This happened, and now we can look past it and look to next week,’ so that was good to hear.”

Sunday’s game was the first of eight straight for LouCity at Lynn Family Stadium. Next out, at 8 p.m. Saturday, the boys in purple begin “Group E” play against Saint Louis FC. Indy Eleven and Sporting KC II are also in the pod, from which the top two teams will advance to the USL playoffs this fall upon completion of a 16-game regular season.