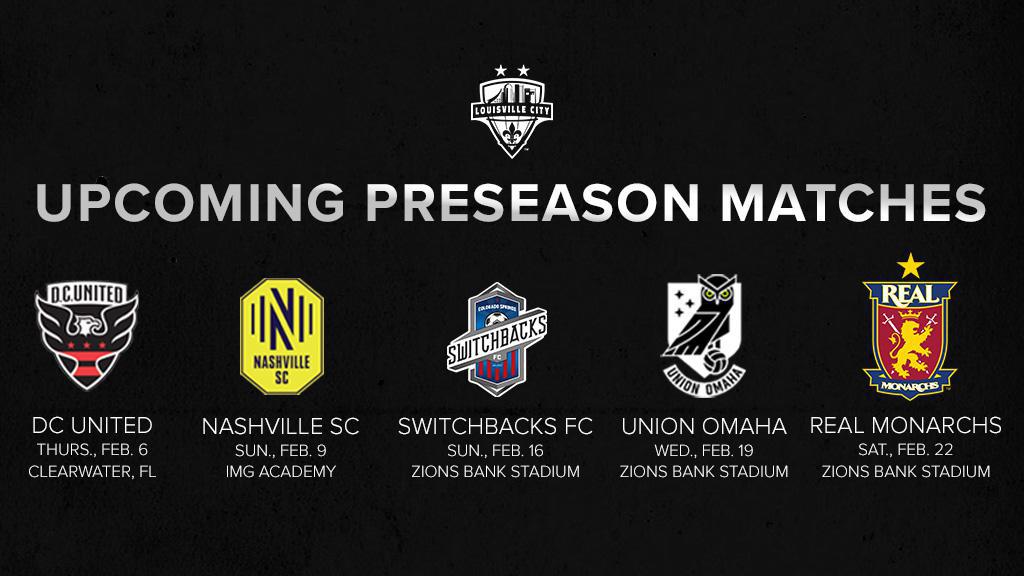 The three-time Eastern Conference Title Winners will train in Florida from Jan. 30 through Feb. 10 while facing a pair of MLS clubs in preseason training games: DC United on Feb. 6 and Nashville SC on Feb. 9.

“It is our time to really concentrate on everything we want to do,” Louisville City head coach and Sporting Director John Hackworth said. “On top of that, it is more important that we get some really meaningful competition. Playing two MLS teams, DC United and Nashville, will give us an excellent test of exactly where we are.”

IMG Academy annually attracts soccer clubs from around the country to its training grounds for preseason workouts. Having clubs in close proximity makes it easier for Hackworth and other head coaches to test their teams against other quality competition each preseason.

Hackworth was pleased with the work his team has put in so far in Louisville.

“I feel really good about what we have been able to do as a group,” Hackworth said. “We got in all the sessions. We never really changed from our tactical periodization in regard to what we really wanted to accomplish. I think because we have such a large number of returning players that it really wasn’t so much about teaching new ideas as making sure it was a review for the new guys. Yes, for them, it was a little new, but for the most part, I thought the guys, players, and staff, dealt really well with it. In addition, we had a good number of academy guys joining us this week, which is an excellent way to build our pathway to the pros. So, a lot was accomplished this week.”

Hackworth and company closed out their week of training in Louisville with an intense team workout at Shred 415 on Baxter Ave.

“We closed out the first phase of our preseason with one more session, but it was a gym session,” Hackworth said. “Besides that, (Thursday) I want them to make sure that they take care of all of their personal business. Get a little bit of rest, it’s a day off from any physical demand, but we do have the travel. We are traveling a little later in the afternoon so really we just want them to be ready to go when we have our first session Friday morning at IMG.”

In addition to the two preseason matches scheduled with MLS clubs in Florida, Louisville City will also face three USL clubs in the previously announced Wasatch Cup in Utah. The Cup, hosted at Zions Bank Real Academy in Herriman, Utah, will consist of the final two teams in the USL Championship Playoffs: Louisville City and Real Monarchs, as well as the Colorado Springs Switchbacks from the USL Championship and Union Omaha from USL League One.

On April 7 at 7 p.m., Louisville City will host the winner of the Nashville United and Cleveland SC (NPSL) matchup at Lynn Family Stadium. LouCity will open its USL Championship slate on Saturday, April 11 vs. Birmingham Legion.