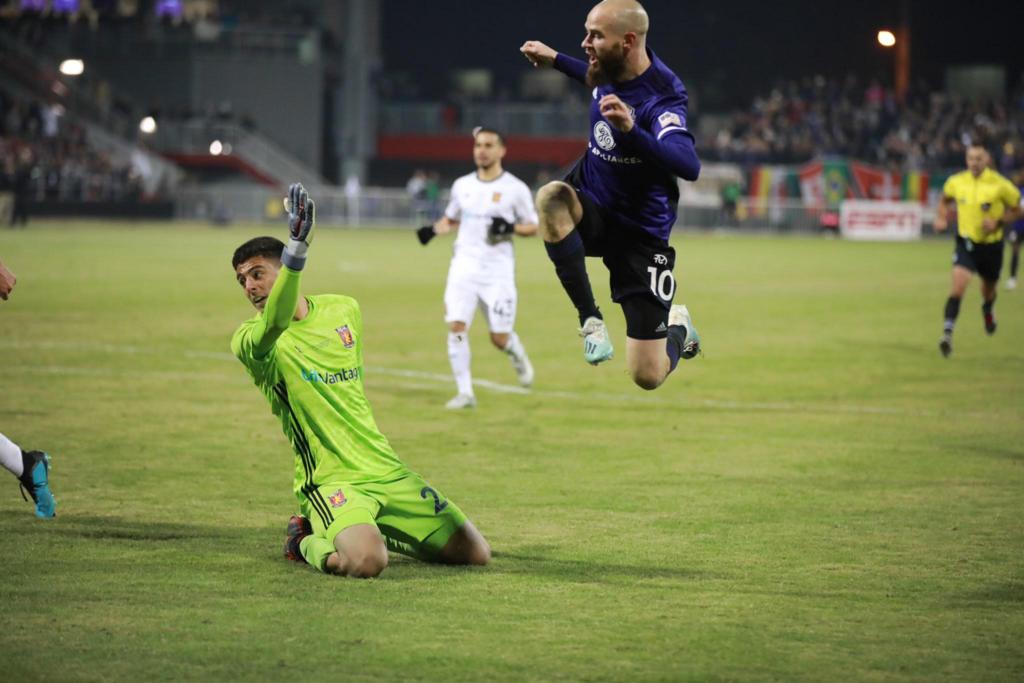 The Eastern Conference Title Winner, LouCity came into the game favored against the Monarchs, and purple-clad fans dreamed of attaching a third star to LouCity's crest.

When Louisville City midfielder Magnus Rasmussen scored just after the five-minute mark and LouCity dominated the early run of play, it appeared Sunday night's ESPN2 broadcast could be more of a coronation than a challenge.

But the Monarchs regained their composure, held their defensive shape on the backline and foiled chance after LouCity chance to push the lead beyond the 1-0 advantage. The Monarchs scored the equalizer in the 25' on a header from Erik Holt off a set-piece.

Then 20 minutes later, just before the whistle blew for halftime, the Monarchs struck again on a set-piece, this time a blast from Konrad Plewa. LouCity coach John Hackworth said he felt his team could still win the day.

“At halftime, yes, but we also knew that challenge," Hackworth said. "They’re so good defensively and they’ve been so good leading up to this. When that second goal goes in, and I believe the 44', that was a dagger. It’s a terrible time to give up a goal. Our staff has prepared a halftime talk about adjustments and it all gets thrown out the window in one moment. Now you’re down a goal when you think you’re going into the locker room even.”

Down 2-1 at the half, Louisville City brought on Abdou Thiam for Pat McMahon to try to provide more scoring punch in the 58'. Thiam immediately put more pressure on the Monarchs' stout backline, but he couldn't find the net. Then LouCity gave up another goal, this time by Noah Powder, and fell behind 3-1 in the 66'.

LouCity had come back from deficits twice in the playoffs this season and a dozen more times during the regular season. But when his team went down 3-1, Hackworth said he had a thought that it might just not be their night.

“I don’t know if there was a moment," Hackworth said. "Certainly, when I think the ball falls to Abdou in front of him and he has the job of figuring out a way to get it passed the Real Monarchs goalkeeper, and it doesn’t happen for us, that was tough. At that point we’re down by two goals. I think the third goal that they score we had to throw numbers forward, so we knew we were going to be vulnerable on the counter-attack. I know Chris (Hubbard) would want that back. 10 out of 10 times he saves that normally. Maybe that third goal or the fact that we just couldn’t find that second one. I felt like if we found that second one in particular, at that point in the game, we would’ve had a lot of momentum. I would’ve liked our chances to find a third.”

LouCity never did find that second or third goal. The Monarchs won the club's first USL Championship trophy by that 1-3 final margin.

“It was a challenge as no one has won three in a row before and we were so close to doing it," LouCity captain Speedy Williams said. "To be honest, that’s a testament to the team and what we do every day in practice and our beliefs and I’m telling you right now, there’s a big chance we’ll be here again next season.”