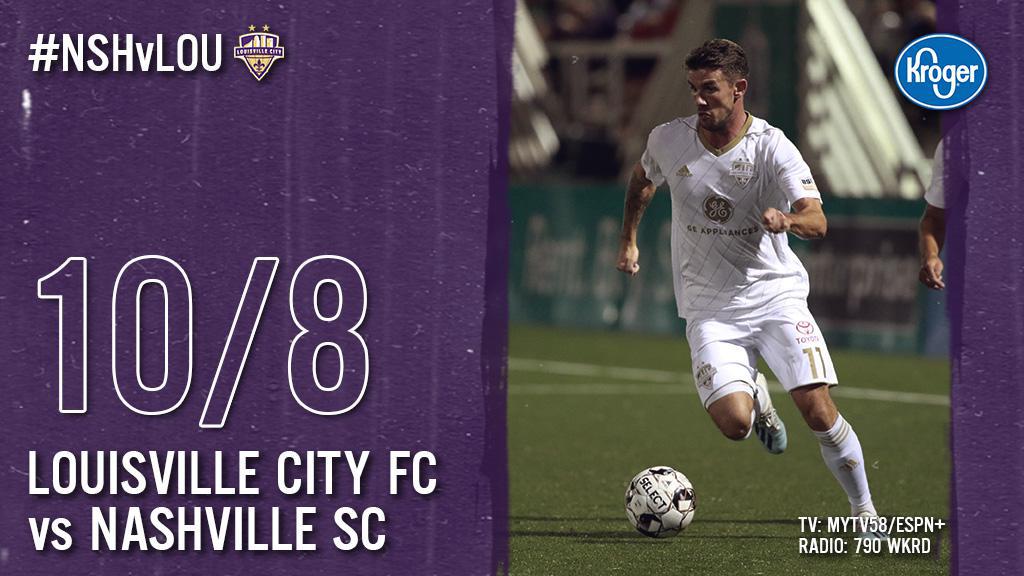 Louisville City FC is on the road tonight at Nashville SC in a key Eastern Conference battle. Kickoff is set for 8 p.m. ET with the game televised on MyTV-58 locally, ESPN+ nationally and YouTube internationally.

The Boys in Purple are unbeaten in their last 10 matches and have won seven out of the last 10. LouCity will be facing a Nashville team that is currently in the third position in the East and hoping to secure a home playoff game.

"I think what you will see tonight is two teams that are very hungry for points," Louisville City FC coach John Hackworth said. "Both of us are in the thick of this playoff race and we are both looking at what three points would do for our totals."

With just three matches left in the regular season, Louisville City still has a possibility of being anywhere from a 1 seed to an 8 seed in the Eastern Conference Playoffs.

"We still have a goal of trying to play at home in the playoffs," Hackworth said. "And to do that, we need as many points as possible in these last three games."

For Louisville City to be guaranteed a home playoff game, they'll need to finish in the top four in the East. LouCity is sixth currently with 54 points. Pittsburgh leads the league at 62, with Indy Eleven at 59, Nashville at 58, and New York and Tampa tied at 57.

For LouCity to get three points Tuesday night it'll be a test of their defense. During the club's recent run of 10 straight games unbeaten, the defense has been tremendous, allowing just 0.8 goals per game while averaging 1.9. Nashville is in the top 15 in the league in goals with 52.

Nashville has three talented goal scorers in Daniel Rios (his 18 goals this season are second in the league), Cam Lancaster (who set the league record for goals last season while playing for Louisville City), and Lebo Moloto, the former Swope Park Rangers goal scorer.

"It is a quick turn-around so we'll need to see who is recovered and ready," Hackworth said. "It is very difficult to play two matches at this level in the span of 72 hours."

Kickoff is set for 8 p.m. ET with the game televised on MyTV-58 locally, ESPN+ nationally and YouTube internationally. The radio call will be on 790 KRD with Kevin Kernen and Howie Lindsey.