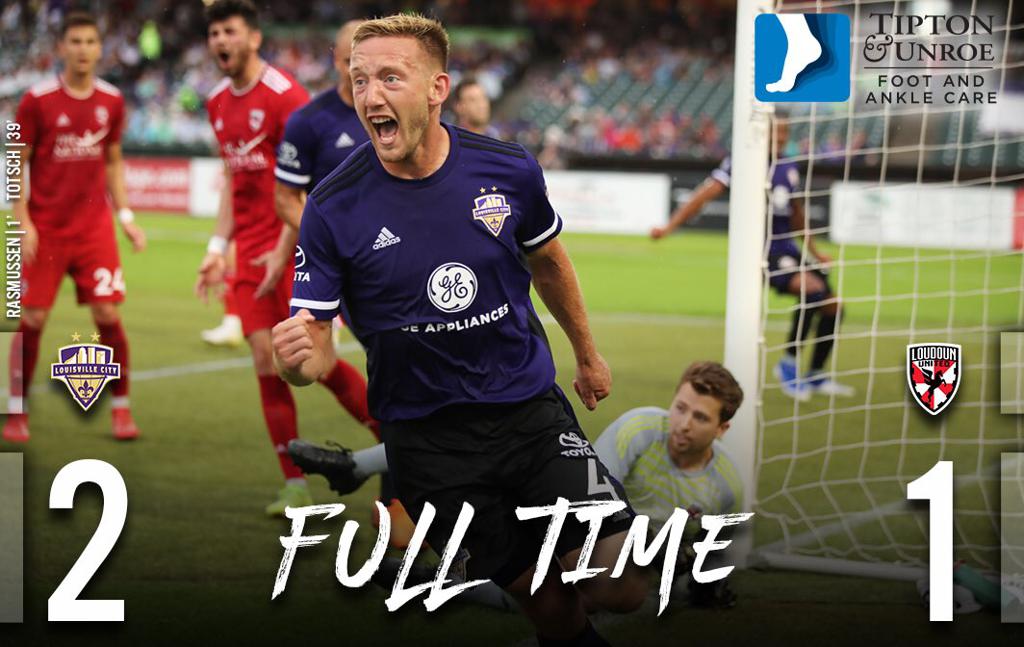 Louisville City notched an early goal by Magnus Rasmussen (1’) and picked up the game-winner from Sean Totsch in the 39’ to beat Loudoun United FC 2-1 Saturday night at Slugger Field in Louisville, Ky.

After the match, Louisville City coach John Hackworth said he'll take the three points from the win, but he wasn't satisfied with the level of play from his team.

“It wasn’t a good performance on our part, we had a ton of chances and took a lot of shots, 28-9, the problems is that we didn’t put enough of those on frame," Hackworth said. "We hit high and wide and not really testing, that was an issue and we had a lot of easy passes and just missed our guy."

Louisville City dominated the first half. Even after getting the early goal in the first minute, it appeared they would blow the match open with shot after shot in the first 20 minutes. Despite leading in shots 28-9, Louisville City had just seven shots on goal to Loudoun's four.

"It wasn’t a great performance, but credit to Loudoun," Hackworth said. "We talked about that it was going to be tough game because of the quality that they have in some guys that I know really well. They are going to be really good as amateurs, and they are already really good at this level. Plus, they have some quality veteran players.

"I give them a lot credit for making it hard, that kid Griffin Yow scores a great goal off a mistake of ours in the second half and made us scramble there for a bit, I felt like we were going to get the third one to put the game away and that just never happened. I felt like we should’ve gotten the second and the third that’s in the first 15 or 20 minutes of the game and it would’ve been a completely different contest. This game is cruel that way and you've got to battle through and got to ground out results and that’s what we did this evening.”

Louisville City's first goal came in the first minute of the match. A cross from Taylor Peay was put into the side of the net by Magnus Rasmussen.

“Yeah, it’s nice," Rasmussen said of the early goal. "It’s nice to get an early goal. Obviously, that means – like last week – that they have to bring a little bit more instead of sitting in. Credit to them though, I think they kept playing and they gave us some problems at times.”

Despite so many chances early on, Louisville City had to wait until near the end of the first half before a corner kick by Oscar Jimenez was tucked into the side of the net by Sean Totsch.

“It was just my chance to make a near post run," Totsch said. "We switched it up from game to game and that's what we drew up for today. You know we have guys making that run every time, so it's just the ball was in the perfect spot for me and it was put away."

Louisville City has a quick turn-around before Wednesday night's Open Cup showdown with FC Cincinnati, LouCity's old rival from the USL. The match starts at 7:30 and will be broadcast on ESPN+.