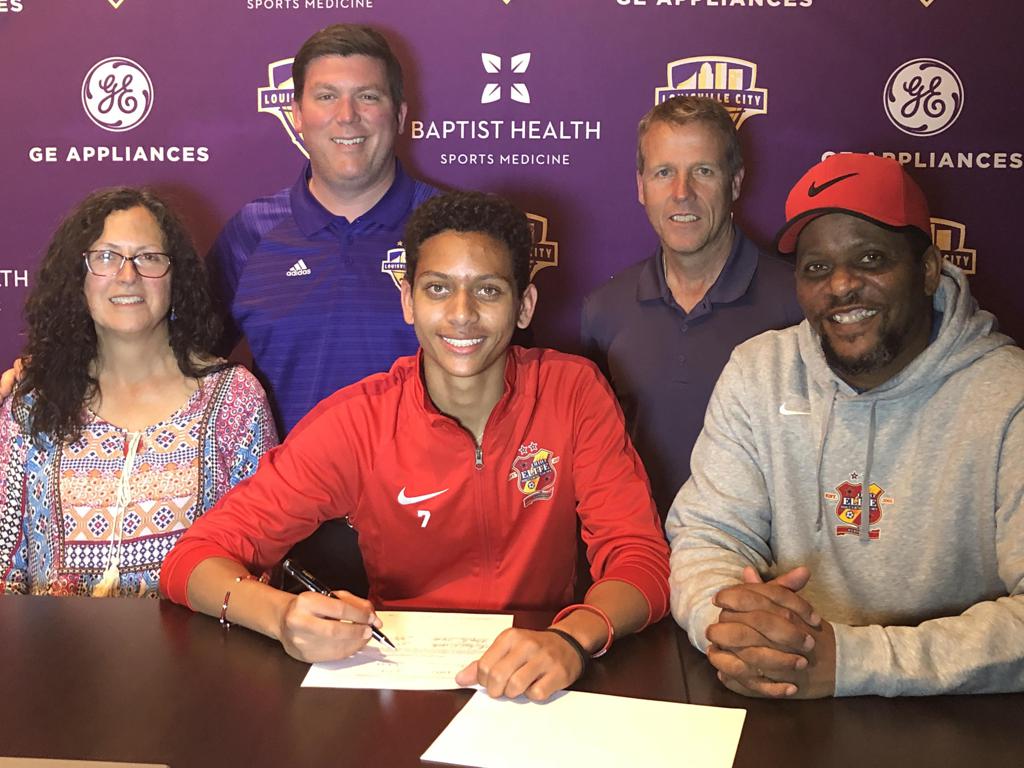 “We are excited about signing Elijah and look forward to continue working with him to accelerate his development,” Louisville City coach John Hackworth said. “Part of our vision for Louisville City is to grow and develop the next generations of stars in our community, and signing Elijah is our next step in that process.”

Wynder, a 16-year-old from Oldham County, has been training with Louisville City alongside several other young local stars for several weeks, including more intensive training during the recent Spring Break.

“I have seen Elijah develop over the past few years. I’m thrilled to make Elijah the first of our affiliate signees,” Louisville City Director of Youth Development and Community Relations Mario Sanchez said. “Elijah has an incredibly bright future. This signing is both an acknowledgement of the player he is now, but also a vote of confidence in the player he is going to become as he continues to mature and grow.”

Wynder said the club’s offer to join them as an Academy player was a surprise.

“It was unexpected, but it is exciting,” Elijah Wynder said. “I’m excited about the opportunity to join the club.”

Wynder was joined by his family at his signing in the Louisville City FC offices. Pending League & Federation approval, he will be eligible to be added to Louisville’s roster for upcoming USL Championship matches for the remainder of the season.

“I’m very excited for our son,” Elijah’s father, Mike, said. “This is an incredible opportunity for him. We give God the glory for this opportunity for our son. Our family is so proud of Elijah and I’m looking forward to seeing him grow.”

“We believe this is a win for everyone involved - for Elijah and his family, for Louisville City and for his club and high school,” Hackworth said. “There’s really no downside for local players as they view this opportunity to challenge themselves and continue to grow.”

Under the terms of the USL Academy agreement, Wynder retains all amateur status and NCAA eligibility. Wynder will continue with his schoolwork at Louisville Collegiate and continue playing for his club team, Ohio Elite-KY.

Wynder’s club coach, Charlie Traughber of Ohio Elite-KY Soccer Academy, said, “It is great for our Louisville soccer community to have one of our youth players who was ​developed in our local community to get signed and get the opportunity. This is a fantastic opportunity​ ​for one of our Ohio Elite players, and for future players in the community, to have this pathway to a higher level of play thanks to Louisville City FC. I’m so happy for Elijah and his family.”

Wynder will join Louisville City for its upcoming roadtrip to Tampa for the Tampa Bay Rowdies game. He has been working with the team this week in preparation to make the trip.

“It is fun, but it is hard,” Wynder said. “It’s exciting to be able to practice alongside the professionals, but it is very challenging.”

Sanchez, who will guide Louisville City’s efforts to build an team to compete in the USL Academy Cup in 2020, said finding talent like Wynders’ is a key part of Louisville City’s vision, “Several of the top young players in the region have come out to train with us over the last several weeks, and Elijah’s talent was obvious to everyone. We have some tremendous young players in our area, and I am looking forward to working to grow the game in the Louisville community.”

Since its launch in 2014, Louisville City FC has been committed to serving the community of Louisville and state of Kentucky as the lone professional soccer team. Finishing in the top five in average attendance in the USL at Slugger Field since 2015, LouCity’s remarkable 2017 campaign included winning the USL Cup in the club’s first appearance in the final. Despite a midseason coaching change, Louisville City won its second USL Cup, becoming the first back-to-back USL Cup winner in the USL modern era. Get the latest news on Louisville City FC at LouisvilleCityFC.com and via the club’s  channels on social media, including Facebook, Twitter, & Instagram.­­

The United Soccer League officially unveiled its vision for the future of the league’s Academy system on March 14, 2019, with the announcement of USL Academy Cup, a new competition set to begin this year that will set the stage for the organization’s first ever Academy League. The newly announced USL Academy Cup will feature top young talent from the U-13 and U-17 age groups, with all clubs tasked with identifying exceptional young players that can play up and be challenged at a higher level throughout the competition. Competitively, the U-17s will compete in two regional qualifiers split geographically between the Eastern and Western Conference. Regional results will determine seeding and placement ahead of the national event, which is set to take place on May 22-25, 2020 at Tournament Sportsplex of Tampa Bay. Regional qualification is set for October 11-14, 2019 and February 14-17, 2020, respectively. The U-13 age group will compete only at the national event, where a champion will be crowned. More information on the USL Academy structure is available at USLSoccer.com.