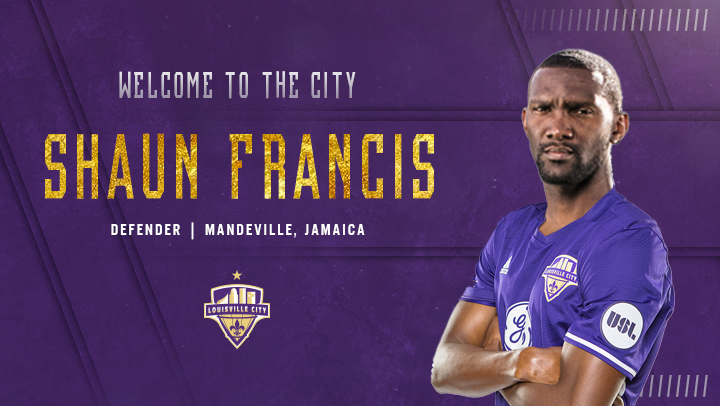 Louisville City FC has signed former MLS defender Shaun Francis for the 2018 season pending league and federation clearance, the club announced today. The defender joins the ranks as the 20th rostered player for head coach James O’Connor. Terms of the deal will not be disclosed, per club policy.

“Delighted to be able to sign someone of Shaun’s caliber,” said O’Connor. “Really pleased with his attitude and his quality, and we’re very excited to have somebody like that on board.”

Francis joins the “Boys in Purple” after spending time with San Jose Earthquakes before a trade to Montreal Impact. Drafted in the fourth round (63rd overall) of the 2010 MLS SuperDraft by Columbus Crew, Francis spent his first two years with the Black & Gold before landing in Chicago in 2013, making a combined 29 appearances between the two clubs. The versatile defender’s lengthiest spell was his three years with San Jose Earthquakes, where he appeared in 69 matches in all competitions after being selected in stage two of the 2013 MLS Re-Entry Draft.

Joining Devon “Speedy” Williams as one of two Jamaican internationals on the roster, Francis has netted three times in 11 appearances for the “Reggae Boyz,” including goals in the 2010 Caribbean Cup, in 2017 Caribbean Cup qualification, and in the 2017 CONCACAF Gold Cup.

Carrying a green card, the defender does not count against LouCity’s allotted number of international slots.