Bell: What we learned from LouCity's win over Charlotte

The boys in purple didn't bend to opposing pressure in Saturday's playoff game. 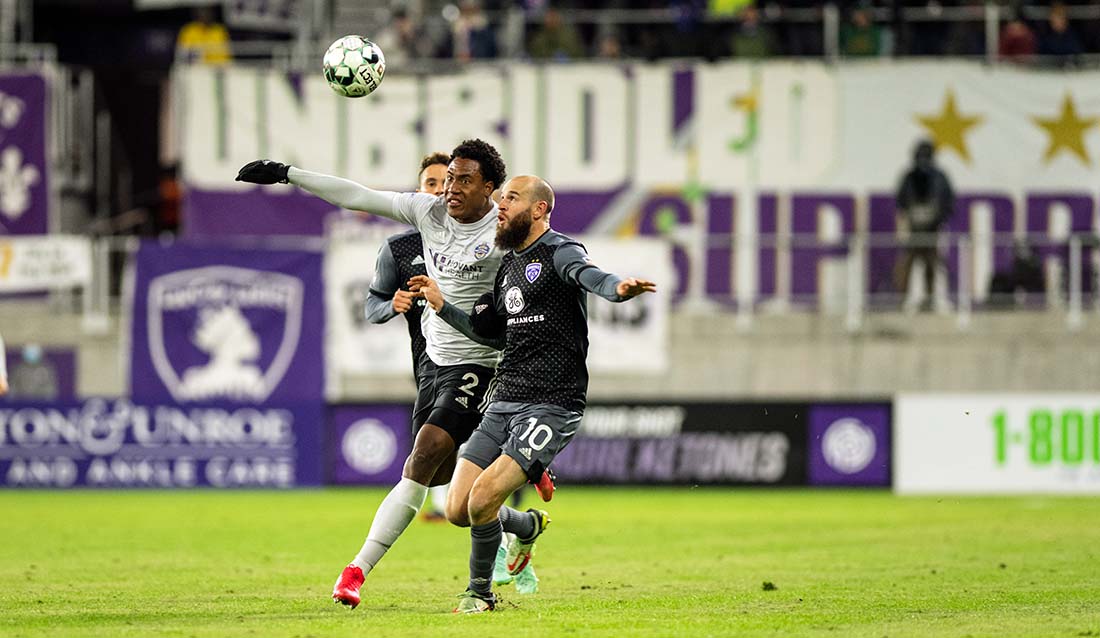 Louisville City FC defeated the Charlotte Independence on Saturday night in a feisty USL Championship Eastern Conference Semifinal featuring 10 yellow cards and dangerous chances for both sides. The victory advanced the boys in purple to their seventh straight Eastern Conference final in as many seasons after Cameron Lancaster dramatically punched the ball into the top corner off a Jonathan Gomez-won penalty kick in the 89th minute.

While the Independence have never won in Louisville, dropping to 0-5-2 all time, Charlotte wasn’t a brush-aside team by any means. The visiting roster included former Leicester City and Premier League champion center back Christian Fuchs as well as striker Dane Kelly, the USL Championship’s all-time leading scorer. Charlotte entered having knocked out Memphis 901 FC in a first-round playoff game.

But with this victory, LouCity will travel to play the Tampa Bay Rowdies at 7:30 p.m. Saturday with a spot in the USL Championship Final on the line.

“This was a difficult game against a very good opponent,” head coach Danny Cruz said. “Ultimately, I thought we did enough to win. Every single week [the players] give me everything that they have. The preparation this week was excellent, and the opponent presented exactly the way we thought they would. We talked about advancing, and that’s what matters.”

Here’s more of what we learned…

Against Charlotte, LouCity made it a third straight clean sheet for the first time all year in a season where the boys in purple have leaked goals late in halves. With shutouts against Birmingham Legion in the season finale, playoff first rounder versus Miami FC and now Charlotte, Cruz’s back unit has stepped up when it matters most. Starting goalkeeper was a question much of the season, but Chris Hubbard stepped up with three huge saves against Charlotte. Hubbard was also dominant coming out to get crosses and corners to minimize the Independence’s chances.

Though Charlotte took 10 shots against LouCity, only three of those attempts were on frame compared to LouCity’s five on target out of 13. LouCity’s aerial dominance kept Charlotte’s Kelly quiet throughout the game. City center backs Sean Totsch and Wes Charpie won 90% of their aerial duels on average opposed to Charlotte center-backs’ 37%.

LouCity outside back Jonathan Gomez and Man of the Match winger Brian Ownby led the team in tackles, tallying two apiece. Gomez and Totsch topped interception stats for the night with a pair each.

Defensive-minded players such as Tyler Gibson, Pat McMahon, and Napo Matsoso came into the game to hold onto the clean sheet, with Matsoso getting his first minutes since he was injured back on Oct. 16.

In addition to his game-winning penalty, Lancaster registered four shots against Charlotte, tied for the most on the pitch. His 21 goals on the season are level for third in the USL with Memphis’ Kyle Murphy. Lancaster isn’t far off this season’s top scorer Hadji Barry (25), whose team fell in the first round of the playoffs to Orange County. Lancaster will go head to head next weekend with Tampa Bay’s Sebastian Guenzatti, second in scoring across the USL Championship with 22 goals. Impressively, Lancaster has put up phenomenal numbers despite missing seven games due to injury.

Lancaster has scored in 16 LouCity games so far this season, with four of those being multi-goal matches. The Englishman is also the only the second player in the USL Championship to ever record two 20-plus goal seasons. His other came in 2018 when he scored 26 and claimed the league’s Golden Boot.

“If there was a camera zoomed in on my face, I would be repeating, ‘This is what you do, Cam,’” Cruz said of his reaction to Lancaster’s late try from the spot. “I saw him all week take penalties. He’s confident anytime he steps up to the spot.”

Looking ahead, the Tampa Bay Rowdies present the biggest challenge of the season yet. According to FiveThirtyEight.com, the Rowdies now boast a 43% chance of hoisting the USL trophy versus LouCity’s 25%.

A win at Tampa Bay would send City to the finals with a good shot of adding a third star to its crest, especially considering top Western Conference seeds El Paso Locomotive and Phoenix Rising were knocked out in the first round of playoffs. An in-form defensive crew certainly helps LouCity going to Tampa Bay.

LouCity’s squad health is looking better than ever, with only young center back Josh Wynder held out of Saturday’s game. Matsoso’s return is important, as he’s a versatile midfielder

“We can’t undervalue how great our fans are and we won’t have our same full stadium,” Paolo DelPiccolo said about playing away next weekend. “At the same time, luckily, Tampa Bay has a proper field, which isn’t always the case, so it’ll be a good game and they're a great team. For us, it’s just a normal challenge of playing a good opponent.”